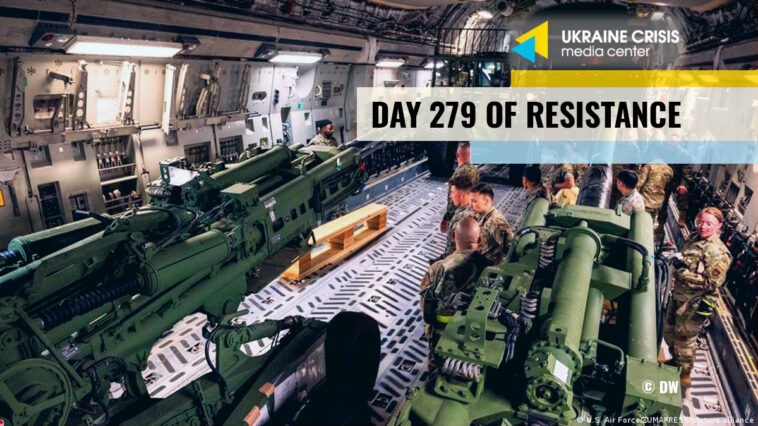 Power restored to half of consumers in Kherson

Power was reconnected to half of the liberated city of Kherson, head of the Kherson regional military administration Yaroslav Yanushevych said. “Lights came back on for 50 per cent of consumers in Kherson,” he said.

On November 26, power began to come back in Kherson that was retaken from the Russian forces.

NATO allies need to make sure that Ukraine not only gets more air defenses, but also spare parts and ammunition for the systems, NATO Secretary General Jens Stoltenberg said at the NATO Foreign Ministers’ Meeting in Bucharest.

“The message from all of us will be that we need to do more,” Stoltenberg said as Ukraine needs to rebuild the damaged critical infrastructure and protect itself from Russian strikes with more air defense systems.

“This is partly about providing new [air defense] systems. (…) But it’s also very much about ensuring that the systems we have ordered to deliver are functioning. (…) One of the huge challenges we face now is that some of the advanced systems like the NASAMS that NATO Allies have provided already (…), that we are not only providing those systems, but that we’re also ensuring that we provide the necessary ammunition and spare parts,” NATO Secretary General said.

Fourteen years ago, a NATO summit in Bucharest confirmed that Ukraine and Georgia would one day join the Alliance. Both countries did not get the Membership Action Plan.

Protection of the energy system from Russian missile strikes is a top priority that Ukraine will reveal during the meeting, he said.

In a joint news conference with NATO Secretary General Jens Stoltenberg in Bucharest, Ukraine’s Foreign Minister urged the partners to step up the pace of arms supply to Ukraine. He also said that Ukraine’s urgent need was to get the equipment to fix damaged energy facilities, and get air defense systems.

“The last time I was invited to the NATO ministerial, I came with three words which were: weapons, weapons and weapons,” Kuleba said. “A lot has been done since then in helping Ukraine to equip our army with necessary weapons. These weapons help us liberate our territories,” he added.

“Today, I have three different words, three other words which are: faster, faster and faster. We appreciate what has been done, but the war goes on. We proved that we can defeat Russia. We proved that we can win together in the interests of the entire Euro Atlantic space and the world. But the decisions on [the provision of] weapons, and on the launch of new production lines of weapons in the West have to be made faster. Deliveries of weapons have to become faster. We are discussing today with the ministers how to speed up everything,” Dmytro Kuleba said.

“It will be probably the first NATO ministerial where issues of energy security will be as important as of hard security,” he added.

How do Kyiv museums keep their collections safe? Museum of the History of Kyiv’s Maria Tymoshenko and Liudmyla Moroz and the Director of the Pedagogical Museum of Ukraine Oleksandr Mikhno explain.