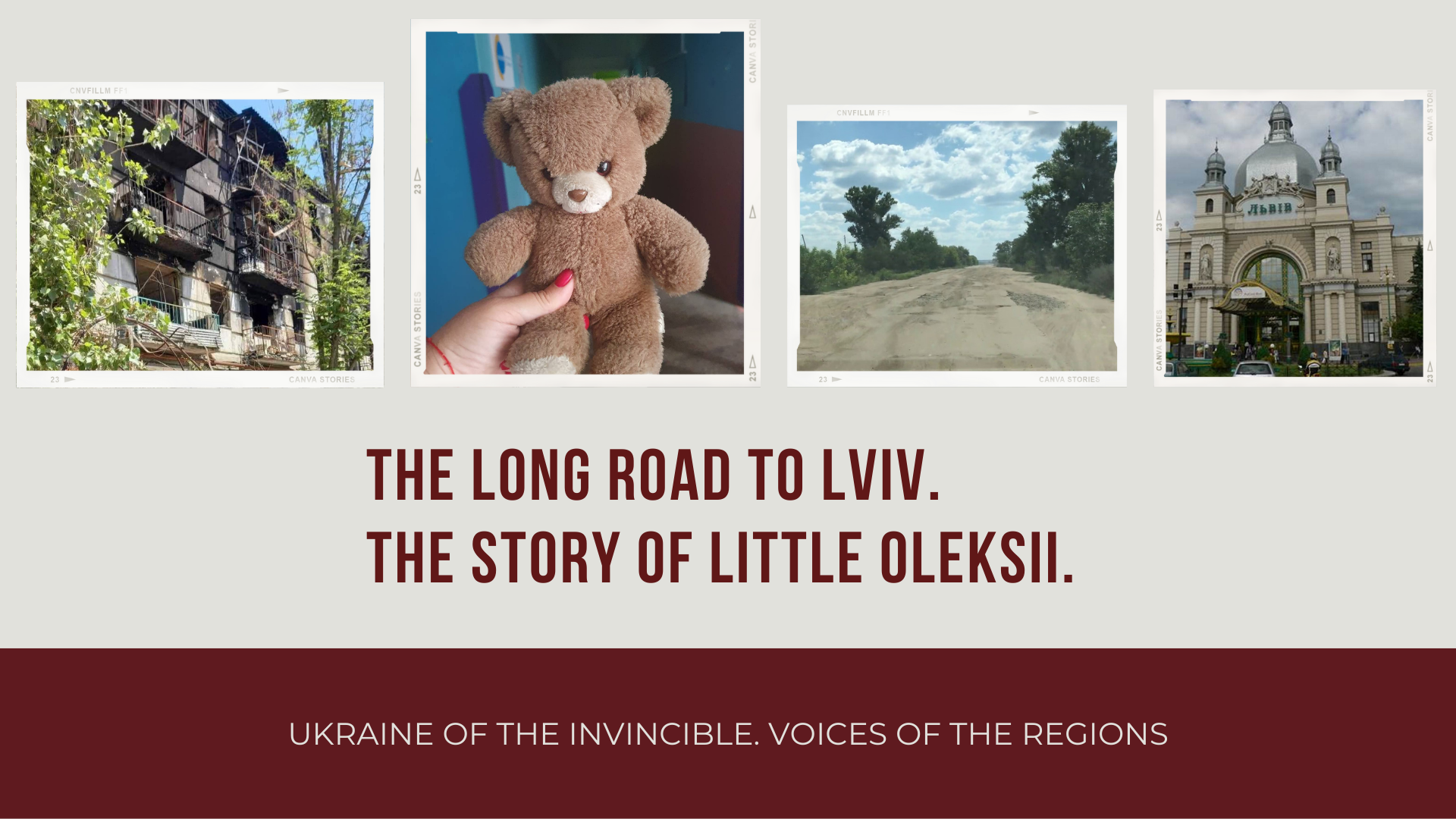 Within 100 days of full-scale war, over 8.3 million people crossed the border of Ukraine with the EU and Moldova in both directions. Such data are provided by the State Border Guard Service of Ukraine. At the same time, almost 2.7 million people have registered to enter Ukraine. And the figure is growing. It confirms once again that you cannot escape war.

Oleksiyko woke up three times during the night so as not to miss the bus. In the six years of his life, he had never been away from his mother for so long. She brought him to the town of Kreminna in Luhansk region to stay with relatives over winter vacations. Then the school moved to distance learning because of quarantine. So he stayed at his relatives’ for a longer time.

I like to stay with my grandparents, there are forests everywhere, a river and a lot of friends, – the kid says. – And then the war broke out. We stayed in the basement for weeks. It’s so hard to breathe there. And the walls are shaking. It seems like everything is going to fall on you.

Now everything will be fine. – his granny stops him. – We’ll go to your mother’s in Boryslav in Lviv region, and it’s safer there. Your mom is volunteering; she’s cooking for IDPs. And by autumn the war will have ended and we’ll return to Kreminna together. We could hardly wait until the shelling subsided and went to Svatove to look for a connection and call mom. There were bodies lying on the roadside and shot cars were still smoking. We talked. We had to cross the Russian border. There was no other choice. Soon everything was ready. We packed some clothes. Grandpa prepared a bag of food. It takes four days to travel from Luhansk region to  Lviv region across four borders. But the kid wanted so much to see his mother, and I – my daughter, that we were ready to endure any hardship.

In the morning, they went to the roadside: a grandmother, a woman of forty-five and a small six-year-old boy. Grandpa saw them off carrying a travel bag and backpack. A small bus pulled up. They got on the bus. Uncertainty and anxiety were ahead. But they had to go.

Transit passengers boarded on the way. Four men got on in Starobilsk. They were going to Germany, because their wives and children had gone there back in March, fleeing the war. Their only desire was to reunite with their families. They used to be farmers who cultivated their land shares.

We sowed the crops and left wherever our feet may take, – the peasant reflects aloud. – We left our homes. We left our agricultural machinery in the yard. Only last year my brother and I bought a new tractor. It costs more than a million hryvnias. The state gave us a preferential loan. And now what? Now we’ll work for the Germans. Our wives are already there. As the war began, they went there to visit our relatives. We’ll all work on a farm. And survive somehow. The military now live in my house. And my parents remained there. What will happen to them?

No one on the bus interrupts his monologue or asks anything. People just sigh and think about their problems.

The girl in the front seat says that she worked for several years in China as a model, and the war caught her in her native Sievierodonetsk, when she came on vacation to visit her family. They fled from the shelling in their father’s car to their grandmother in the village.

When our neighbor was torn apart before my father’s eyes, and his body parts scattered on a nearby tree, Dad ordered us to pack things quickly and flee the city, – says Tanya. – I grabbed the cat. It didn’t understand what had happened, started to break free, tore my jacket and hurt my arm. But I held him so tightly that I noticed blood on my arm only outside the city when we reached the checkpoint. A soldier asked if we were from Sievierodonetsk. All the three of us must have been so pale and gray that he understands at once. He showed a safe way to the villages. There was still room in the car, so we went to our relatives who lived in the suburbs to pick up my cousins. But it was a waste of time as they refused to leave. I can’t understand why in moments of danger people suppress their instinct of self-preservation. What can be more valuable than life?

The girl falls silent. She is going to Dnipro, because her boyfriend is waiting for her there. He serves in the Ministry of Emergencies and therefore knows how dangerous it was for her to stay in Sievierodonetsk in a high-rise building during the shelling of the city.

Oleksiyko chews a banana and asks his granny:

Why is mom so far away, how can she live so long without me? I can’t live without her.

The woman wipes away her tears. And just hugs her grandson.

Neither can she without you. That’s why we’re going so far. We’re galloping across Europe and across so many borders.

We reached the checkpoint in Milovo. Now it’s representatives of the so-called LNR who check passports and luggage. People got off the bus and went to a window in a border guard booth. They showed Ukrainian passports and went to the customs. Their luggage was checked selectively. Some just went through. Some were ordered to open the locks on their suitcases. And some were checked thoroughly, every item was inspected and all seams on their clothes probed.

Men were asked to take off their T-shirts to check for tattoos or belt marks or any other signs of participation in hostilities. But they could not find anything suspicious on the peasants. Everyone went to the bus to move on. Oleksiyko and his grandmother went through quickly and headed for the parking lot, but a girl-model stood under the window for a long time while her phone was checked, because there was a rich collection of photos. Half an hour later, they were on their way to Chertkovo on the Russian border.

They filled out customs declarations. The inspection procedure was repeated near the Russian border checkpoints. The border guards asked people in detail where they were going and what the purpose of their trip was. They gave their luggage for customs control. Even small women’s handbags and purses were loaded on a conveyor belt to get screened for prohibited items. All passengers passed the control and were about to go to the bus, but men were called for an additional check, which lasted several hours. The men had their fingerprints taken and waited long for an answer from various bases of Russian law enforcement agencies.

During that time Oleksiyko managed to get acquainted with some children, who were playing while their father was checked. The children’s mother was willing to talk. They were travelling from a village near Kreminna and had already obtained refugee status in Russia in the city of Tver. She and her husband found work and their children went to a kindergarten. But they missed their home in Luhansk region very much. They visited their elderly relatives who refused to leave home to flee the war. She and her husband really dreamed of going back and living in their house, planting their vegetable garden and tending a small garden planted by her father. The woman cried.

Late in the afternoon, all the passengers finally returned to the bus and continued their voyage. They did not feel like eating, so everyone fell asleep quickly.

A two-day’s bus journey was monotonous and exhausting. Oleksiyko struggled to stay awake and look outside, but soon he was lulled to sleep.

On reaching the border of Russia and Latvia “Burachky-Terekhovo,” they picked up their suitcases and headed for the crossing. They had to wait in line for a long time. For the first time they were asked about foreign passports. Earlier, an internal Ukrainian passport was enough. Later, when it turned out that half of the travelers did not have passports, everyone was permitted to cross the border. At the customs, the officers picked travelers out of the line for a “conversation” in a room behind closed doors. People in uniform asked the travelers why they were going abroad and whether they would like to stay, work and live in Russia. When they heard that the travelers wanted to flee the war and go to Europe to see their families or look for work, they stopped talking and let them go to the Latvian territory.

As they crossed the border, it got dark. There was no transport to get to the railway station. Latvian border guards, worrying about Ukrainian “travelers”, began calling refugee centers to accommodate people for the night. But there were no vacant spaces anywhere. Then they decided to take the Ukrainians to the railway station by their own transport. The station was closed. There was a train to Riga at 3:00 a.m. The stationmaster opened the waiting room, showed where to get water and toilet. And everyone started waiting for the night train.

They went to Riga for free. It was enough for Ukrainians to simply show their passport. They arrived in Riga at eight in the morning. There are volunteer centers for refugees from Ukraine there, where you can get advice on housing, travel, any help. Volunteers helped Oleksiyko’s grandmother buy discounted tickets to Warsaw (or rather found an opportunity to pay for those tickets), and also gave her a food package with fruit and sandwiches.

They arrived in Warsaw at night and were 10 minutes late for the bus to Lviv (they had bought bus tickets in advance). They ran to the bus station, but everything was closed. They turned to the police, who advised them to get on the road and hitch a ride to the Ukrainian border, and then take a bus. They didn’t like that idea, returned to the bus station and started looking for advice from volunteers. However, the latter had no ideas how to solve the problem. The only way out was to wait for a transit bus until three at night, or until the morning.

Some locals invited them to their houses for the night. But Oleksiyko insisted that they leave as soon as possible, because his mother was waiting for him.

They sat on a bench at the bus stop. One of the travelers gave them a blanket to warm the boy. Oleksiyko wrapped himself in the blanket and asked:

Oleksiyko took a little nap. The bus came. Passengers with tickets boarded the bus. Other people asked the driver to take them to Lviv. The driver counted the seats and said he could only take four extra passengers because there were no more seats available. And then almost everyone who was waiting in line asked the driver to take Oleksiyko from Luhansk region first, because he was going to see his mother. The boy stood, wrapped in a blanket and cried: “Thank you! I want to see my mother so much. And let my granny on the bus too, I will not leave her here alone.” His grandmother took out hryvnias and paid the driver. They drove on. They went to his mother.

They got to Lviv in the afternoon, and Oleksiyko’s mother was already standing there at the bus stop. They reached their destination. Everything will be fine now.