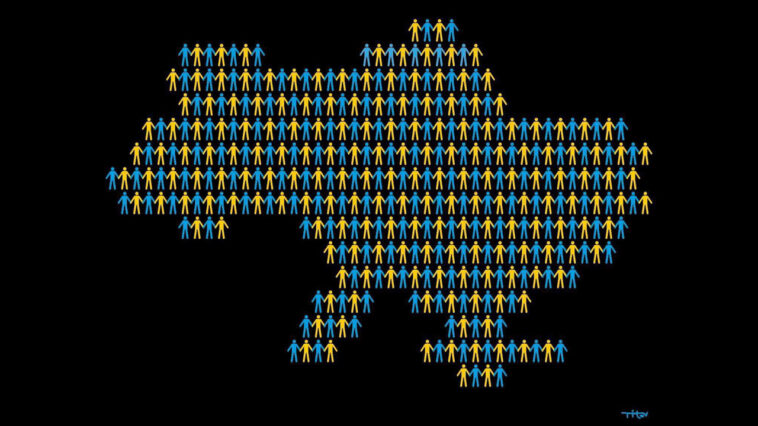 The war consists of small private stories – heroic, tragic, and ironic. The news cover only a small percentage, the rest is stored in the memory of the participants and witnesses. I traveled around the liberated territories near Kyiv and talked to the people. Here is a short war mosaic of what I`ve heard.

My husband told me to evacuate and stayed in Bucha. I kept in touch with him. He was helping the volunteers to deliver something. His car was shot, he was seriously wounded. Last time he texted me three weeks ago. The hospital did not work, apparently he died. I came here to see the exhumation, maybe he is buried here.

Here is my house, you see the holes over the well. I was standing on it. When the convoy of Russian vehicles drove down the street, I jumped out here, let the two APCs pass and shot from the PRG the fuel truck. I had four grenades. Three, I don’t know how, I managed to throw in a minute, then I crawled under the fence, ran into the yard and kept the last one for myself. I called our guys, gave the coordinates, they finished off the APCs with javelins. I had waited for half an hour, took out my phone, turned on the video, and walked to the side where the convoy came from. I saw our soldiers with yellow marks. I approached. They shouted “No video!”. These were Russians in our uniform. I said, “Fuck you,” turned around and walked back slowly. I didn’t care if I was shot… You see what they did to my house. Here are holes from heavy machine gun…

We are from Luhansk. Grandmother is from Alchevsk. She worked in the iron factory as an engineer. We left in 2014. First to Kremenchuk and then to Bucha, because my brother settled in Kyiv. In 2014, we left Luhansk when there were no horrors yet. And now we experienced everything. It’s not cold today. Can you imagine living in a flat without heating, water and electricity when there is -10 Celsius?

We had eight Russian APCs and ten tanks near our house. One APC aimed directly at our house. There was a sniper’s position. Also aiming in our direction. I buried my military ID in the yard. They wanted to take my car, but the battery sat down. I tried to start, it didn’t work. The Russians established the curfew from the 4 p.m. They ordered everybody stay in house. The neighbor came out, got a bullet in the stomach. The hospital did not work. We went to the Russian doctor, he sewed the wound with a bullet inside using an ordinary needle and no anesthesia. Now my neighbor is in Kyiv, being treated… A friend of mine was visiting his daughter, she lives 200 meters away. The Russians had ordered him to stop, and he tried to run… They shot his head off with a underbarrel grenade launcher…

There are about twenty of us left in this building. We are still living in the basement in case of the new wave of invasion. See this dog with a shot paw? He had barked, and the Russians did not like it. When they first came to us, everyone was taken out of the basement – men separately, women separately. Men were checked for tattoos. They had taken all our mobile phones and broke them.

I had told our daughter to evacuate and stayed with my wife here. I am a hunter, a good hunter… My car has a special tuning, it is unique for Ukraine. My car is magic, a mortar mine lay five meters from it, and there are no scratches on it. I will not sell it to anyone. My wife stayed at home, she prepared food for our boys on the open fire in the garden, while I was “working”. Every night I came back wondering if our house is intact. I didn’t care about the building, but my wife was inside, that’s the main thing…

I was born in 1947. Before the war I didn’t have cats at all, now I have more than twenty… Here in the garden I cook. Once I fell on the fire and miraculously did not burn. I boil water, pour it in a thermos once in two days, that’s how I live. Look, I’ll show the smoke after the shelling I took picture of…

Here are my four cows. I couldn`t have left them. My mother kept cows, and I keep them. There was no electricity, no water, no gas, and a cow needs a bucket of water a day… The heating was turned off, so I came to the stable every morning for some warmth, because the cows heated it with their bodies. I was bringing them some water under fire… And the fields I used for grazing are now mined, I will ask the mayor to demine the territory, because there will be no place to graze…

Look at this hole after the mortar mine. Take a picture of me and my husband, how we look through it. My parents built the house in 1950, just after the war, with a very good basement. It saved us… My neighbor is deaf. I had talked to her  loudly, Russians did not like it, they started to shoot at the fence…

They checked all the houses in the village and forced inhabitants to write “People” on the fences. They took SIM-cards from me and my wife. Luckily I found one earlier. They had checked what was inside the house and were very surprised to see a washing machine… I repair motorcycles, so before they came I hid all good ones, so they didn’t steal anything. They took the car from a neighbor, wrote their symbols on it, now he found it and washed it. On the last day, they noticed our piglet, but we quickly butchered it and hid the meat.

I’m forty-five, but I dressed in a way to look seventy. We slept dressed and shod just in case we might need to run in the basement. The Russians forced us to wear white armbands, even to cross the road to our neighbors.

When they were braking into my house, I was sitting in the basement under this shed. I had a good door, so it took them half a day to brake in. I managed to escape half an hour before they entered the basement. I served in the KGB troops, I buried my military ID, evacuated all the family, and stayed. I checked where exactly they have their positions, passed this info to our boys and fled. Now i`m back. They stole everything they could, they didn’t take the icons. This one of St. Nicholas was hit with a shrapnel. Next time, if they come here, they won’t move so quickly.

My son is six. Before the war I did not want him to serve in the army, but now I do. He must be able to protect his family and his homeland. I bought him a toy gun.

Our house is close to the central road. I evacuated my daughters from the village. Me and my son moved in other place. The orcs broke in and lived for seven days in my house. My son and I were robbed of our pants and socks. And they left their dirty underwear in the house. I took it out with pitchforks and burned.

We had a Russian tank in the yard. Right in front they had a trench. Russian collected the garbage from all over the village to disguise it. Now we cleaned it up a bit. Here we lived with my husband, this is our bedroom… You see, this bed, all this furniture – he made it himself. He did not serve in the army, but he and his brother were killed. They were found in the basement along with four others. And his face was so swollen… he was tortured… For what? What did he do to them? … We had to bury him in a closed coffin…

You see this grave… This couple… they were volunteers, they were delivering some humanitarian aid to our village. They were shot in the car on the road. Russians didn`t allow to bury them for three days. Then they were buried in the garden, only now we had a possibility to rebury them in the cemetery. Both were over thirty. Two small orphans remain. They ask – where is mom, where is dad?

War mosaic has different levels. These short phrases, ordinary printed symbols, evoke powerful emotions. You experience it much more intensely when you hear these stories live from witnesses and participants, tracing all the scars in their eyes, feeling their emotional suffering and bitter optimism. But this cannot be compared in any way with the reality they had to face.

Unfortunately, the amount of similar or even worse stories is very big. A lot of cities and villages were and still are occupied. Unimaginable atrocities are taking place in Mariupol right now.

In addition to fighting, winning and helping, our task is to collect and preserve the war mosaic in our memory.