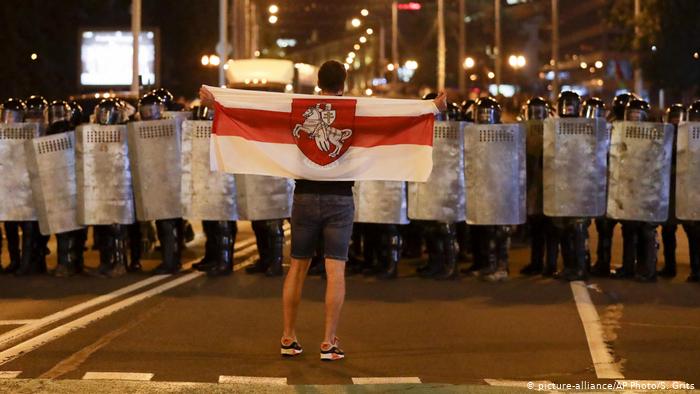 Protests, which broke out in Belarus after rigged presidential election, which incumbent Alyaksandr Lukashenka formally won with 80,08% of votes, have already become a subject of disinformation. A lot of the messaging is aligned between the Belarusian regime and Kremlin, both of which point fingers at foreign interference. The key difference is that Lukashenka added Russian Federation itself to the pool of suspects, also naming the UK, Czech Republic, Poland and Ukraine in an aftermath of detaining 33 operatives of Russian PMC “Wagner”. Despite this falling out, Moscow remains rather supportive of Lukashenka’s rhetoric, echoing the accusations of Western actors – mostly the EU and NATO member-states – that allegedly attempt to organize a “color revolution”.

Belarusian television originally remained silent on the protests, broadcasting idyllic agricultural news, although now that the unrest is impossible to ignore, it dedicates more attention to the issue – demonstrating arrested activists who were forced to refuse any further participation in protests on camera. Communications, including Internet and mobile network, are largely jammed – a move aimed at subverting civic unrest, which the current president also blamed on foreign actors. Russian state-controlled television initially underreported the protests as well, although the issue consistently gains momentum. Both parties mostly deny police violence (which includes driving to the protesters in an ambulance and severely beating them instead of providing medical help) and portray activists as aggressive provocateurs, also insisting they have been bribed: Belarusian Ministry of Interior has detained a person they claim was paying part of the protesters. As of August 12, more than 6,000 people have been arrested – according to governmental data only – and at least 1 person is confirmed to have been killed. Official sources, both Belarusian and Russian, blame his death on an explosion of grenade he allegedly attempted to throw at the law enforcement – claim that is widely questioned. Referring only to the data provided by Minsk authorities is another move typical for Russian coverage of the events. While relying on official information is the best course of action in democratic states, this is not the case with Belarus. Data from independent sources is ignored, and in such a way scale of public dissatisfaction is undermined to picture protestors as a radical minority.

A lot of comparisons – negative ones – are drawn with Euromaidan in Ukraine. Protests are described as using the same “technologies” and following the same playbook, provided by the West (predominantly the USA). This leads to another narrative, currently more present online than on state-controlled television. According to it, Belarusians “shouldn’t repeat the mistake of Maidan” as it allegedly led to war and economic crisis in the state. Such messaging both shifts the blame from Russian Federation for unleashing aggression in Ukraine and incites fear in the protesters. Other messages spotted online – a lot of which are spread by presumably inauthentic accounts – blame Belarusians for being “ungrateful” to Lukashenka, insisting he has provided stability and economic development for the country. Similar accounts often praise law enforcement for their brutal actions.

Yet another message so far observed in social media such as Twitter and Facebook, accuses protestors of being “fascist”. The white-red-white flag, which dates back to at least 1917 and is used by the opponents of the regime, has been called Nazi. It remains a symbol of opposition since early years of Lukashenka’s dictatorship – and Belarusian citizens have been previously detained for displaying it. Similar accusation has been spotted in regard to the slogan “Жыве Беларусь!” (Long Live Belarus!) – in the same manner in which Ukrainian slogan “Слава Україні!”(Glory to Ukraine!) has also been called Nazi by the agents of Russian disinformation. This rhetoric is not yet wide-spread, but should the protests succeed (and not get hijacked) Belarus is highly likely to be accused of radical nationalism – a favorite label of Russian disinformation used against all the states attempting to distance from Kremlin’s control.