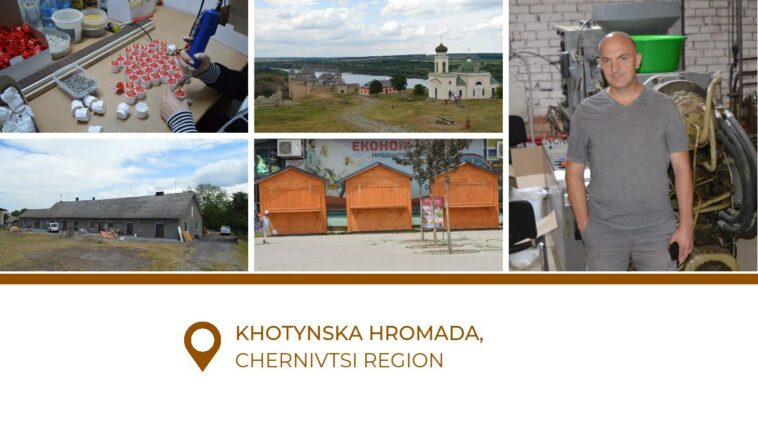 The Khotynska territorial community (hromada) of Chernivtsi region helps Ukrainian businesses that relocated stand on their own two feet. The initiative also promises to boost economic growth. Several large and small companies moved to the community fleeing missile strikes and active fighting in eastern Ukraine. The Khotynska hromada offers them a place to locate production facilities. It also provides internally displaced people with quality housing, medical and social services. International organizations, particularly the USAID Decentralization Offering Better Results and Efficiency (DOBRE) Program, support the efforts of the Khotyn city council to help the new residents return back to normal, integrate and adapt in a new environment.

Khotynska hromada aims to become a territory of economic growth

A stunning 13th-century fortress is Khotyn’s most recognizable landmark.

Yet there is more to see in the picturesque hromada lying on a bank of the Dnister river. Khotyn, the center of the hromada, has wide streets and a lot of greenery. There is a private arboretum with more than 3,000 trees and bushes from all over the world. Khotyn’s urban architecture is also quite distinctive. One of the landmarks is a former Alexandru Hâjdeu theatre constructed by the Romanians in 1934.

Khotyn was the first Ukrainian city that brewed and served coffee. That was in 1472, two centuries before coffee spread elsewhere in Europe. Local entrepreneurs continue to brew tasty coffee – we tasted it. The hromada keenly uses the fact for promotion. We sit on a 30-meter bench on the central square, the longest bench in Ukraine, and hear the bells of the tower that bring us back from the historic past into the present, recalling the war.

Since Russia’s full-scale invasion of Ukraine, residents of Khotyn have hosted about six thousand refugees from Kharkiv, Kyiv, Kherson, and other regions of Ukraine. The community established an emergency response center. The city council registered those who moved and recorded their needs.

The center operated 24/7. The hromada also made a list of the residents willing to host the refugees. Ninety-five per cent of internally displaced people were hosted in private housing facilities, head of the hromada Andriy Dranchuk told us as we meet with him in the city council. Previous experience obtained through DOBRE Program helped the community build a system to respond to a flow of refugees in the first months of the war.

“Training and a marathon that DOBRE conducted for us last year, helped us cope with current challenges,” Andriy Dranchuk said.

Last year, the Khotynska hromada together with DOBRE Program drafted and adopted the development strategy 2027. Hromada’s economic growth is one of the strategy’s priorities. The community established the Agency for Local Development, and the department for economic development and international cooperation aiming to accelerate marketing and communication efforts, stimulate investment, and promote domestic travel. Since the full-scale war, the hromada has used the agencies to cooperate with 10 international foundations, and local self-government in the cities of France and Poland. The Khotynska hromada offered competitive conditions to businesses that relocated. Companies lease premises on discount terms – one hryvnia per year. The community established a business hub offering zero-rent deals for offices of the businesses that relocated.

Businesses that locate their production and logistical capacities in Khotyn Invest, a recently built industrial park can take advantage of the customs and tax incentives from the central government.

“I could count on hromada’s support, so I moved my business to Khotyn”

Ruslan Sadovskyi, the 48-year-old owner of a small company that produces sockets and light switches, moved the production capacities from Kharkiv to the Khotynska hromada. We met with Ruslan in a business hub in the center of Khotyn. He began his business 22 years ago, he tells us, as a reseller of Turkish and Spanish electrical supplies. He set up production in China, but in the past years, moved it to Kharkiv. One of Ukraine’s biggest chains of shopping malls used to be his biggest client.

“I was in Kyiv when the full-scale war began. On February 25, I heard explosions just a few apartment blocks away from the house where I stayed,” Ruslan said. “Production in Kharkiv was halted when the Russian forces temporarily occupied part of the city and began to launch daily attacks. I did not know what to do. I decided to go from Kyiv to Lviv to help my friends who were sending humanitarian supplies. On my way there, in Ternopil, I received a message from my regular customers. They sent me a link to a state program for relocating a business. I filled out the form, and got a call from the Khotyn city council half an hour later. I realized that the hromada is interested in economic development and I can count on their support,” the entrepreneur said.

Ruslan Sadovskyi decided to go to Khotyn immediately. He met with the head of the hromada Andriy Dranchuk. Together they chose a site to locate production facilities and discussed future cooperation. The Ministry of Economy and the Ukrainian Railways (Ukrzaliznytsia) moved the equipment and unsold products from Kharkiv to Khotyn. In late March, the owner restarted production in a new place.

We asked Ruslan to show us the production site. He showed us around a warehouse with finished goods, machine and assembly shops. The production employs 17 workers, of which 90 per cent are local residents. Ruslan is satisfied with their work – they are responsible and learn quickly, he says.

“In big cities, the problems facing small businesses are often left unattended, while in hromadas, I see the authorities interested and ready to help. Hromada is like a big family where problems are solved collectively. The residents get quality services, and they are offered jobs. Everyone in the hromada takes care of the revenue, and they deal with it together. Local government spending is clearly visible here,” Ruslan said.

The entrepreneur builds plans and projects expansion of his business despite the war.

“Khotyn has a wonderful geographic location, just 60 kilometers away from the EU border. Expanding to the European market used to be my dream. I am convinced that we will be successful in the market and will bring the victory closer. As an entrepreneur I find an industrial park that the Khotynska hromada projects, an incredibly attractive idea. I plan to stay here and further develop my business,” Ruslan said.

Ruslan Sadovskyi is the first entrepreneur whom the hromada helped to restart their business. A large manufacturer of electric bikes is ready to build a factory in hromada’s industrial park Khotyn Invest. The community has also had less successful experiences. The hromada did not secure the cooperation of a sewing facility from Kharkiv as the hromada could not provide garment workers willing to sew 10-12 jackets a day.

“We are interested in cooperating with businesses as the hromada gets more job openings and increases revenue. We are negotiating with an owner of a company that manufactures gifts. The hromada received mobile trade stalls from the USAID DOBRE Program. We will lease them with a discount. We also made an agreement with the owner of a healthcare company willing to work in Khotyn,” head of the hromada Andriy Dranchuk said.

One of the biggest challenges facing the internally displaced people is housing, the head of the community said. The hromada offers quality housing for employees of the relocated companies in a bid to stay competitive.

A former education facility is being rebuilt as a shelter. Seventeen rooms with bathrooms equipped with hot water boilers and heating will house up to 70 internally displaced people. There will be a shared kitchen facility. DOBRE Program helps the Khotynska hromada to implement the project. It will provide more than UAH two million (approx. USD 54,200) worth of beds, matrasses, pillows, blankets, bed linens, furniture, hot water boilers, and kitchen appliances for hromada’s refugees.

“The shelter will house employees of the relocated companies. We also want to make the housing available to people with disabilities and to those who lost their homes in the war,” Andriy Dranchuk said.

The community will also provide the refugees with social, medical, educational, and utility services. In Khotyn, 150-200 new community residents get meals daily in an effort funded by the hromada and charities. A canteen at a local hub school turned into a community canteen as workers and teachers cook hot meals for refugees. DOBRE Program supplied two refrigerators for the social canteen.

We also visited a local hospital that the hromada owns since 2021. Last year, it had more than 6,000 patients. The hospital provides 14 packages of services under the contract with the National Health Service. This year, the funding from the central government is to exceed UAH 90 million (approx. USD 2.4 million). The hromada pays utilities. The hospital continues to seek improvement during the war. It recently bought a fully equipped ambulance with air conditioning and heating. Mobile teams staffed by the hospital doctors and the Greek office of the Doctors of the World make field visits to the villages of the hromada in a vehicle equipped with ultrasound and electrocardiogram machines, and defibrillators.

There is a variety of activities for children and young people who had to move with their parents. The community youth center offers more than 40 classes. A public library supported by DOBRE Program established a youth center that holds masterclasses and has a mental health group. In the first days of war, the public library provided working space for IT professionals who fled the areas of active fighting.

The Khotynska hromada supports internally displaced people and has all chances to pursue economic success.