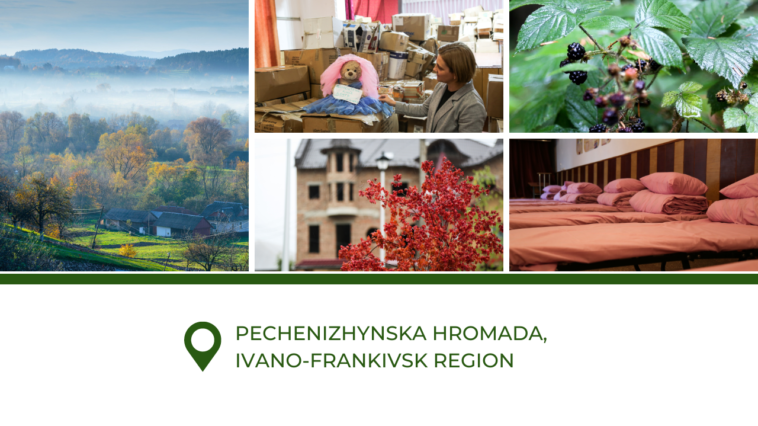 Pechenizhynska hromada (territorial community) is located in the center of Ivano-Frankivsk region. The community was the first to amalgamate in Ukraine and purposefully built its sustainable development. It dreamed of sharing tourist routes with its neighbors and inviting travelers to the unique yew reserve. The plans were interrupted by the war. The hromada quickly united and was not only able to provide shelter to people who lost their homes due to the war but also to help other hromadas.

How Pechenizhynska hromada develops and how it manages to cope with new challenges – read in the material.

Pechenizhynska hromada is the first in everything

Pechenizhynska hromada was the first one to amalgamate in Ukraine – in 2015. The community is located in the foothills of the Carpathians (Prykarpattia), so there is not much agricultural land here. The main income of the community comes from personal income tax. More than 18,000 people live in the hromada.

Pechenizhynska hromada was one of the first in the region to open its own modern Administrative Service Center. The leading position of the community does not end there.

Already in 2016, the community became a partner of the first cohort of USAID DOBRE – an international technical assistance program implemented by the international organization Global Communities and financed by the United States Agency for International Development (USAID). The recently amalgamated hromada, with the support of partners, began to prepare a development strategy, hold public hearings, and determine what priorities it should pursue.

“We had some experience in management. However, many of my team and starostasiStarostas (plural - starostas) is an official in the local self-government, responsible of ensuring that the interests of residents of settlements within the amalgamated territorial communities are represented properly. saw for the first time what publicity is and how people influence the development of the community through their identification and voting. We held large public hearings, where people actively participated,” the head of the hromada Ihor Dovirak recalls.

The secretary of the council Oleksandra Dudinchuk says that within the framework of cooperation with partners, Pechenizhynska hromada began to develop partially unpopular directions, which few communities thought about at that time. In particular, gender-oriented budgeting and other mechanisms.

Pechenizhynska hromada was one of the first in the region to start improving the household solid waste management service. From USAID DOBRE, the community received almost 1,500 individual containers and containers for separate waste collection and installed 15 container sites in various settlements.

Sports and children’s playgrounds were installed in each settlement and the park area of the central manor was renovated. USAID DOBRE specialists helped to create its modern design. Here an opportunity for local business development arose. 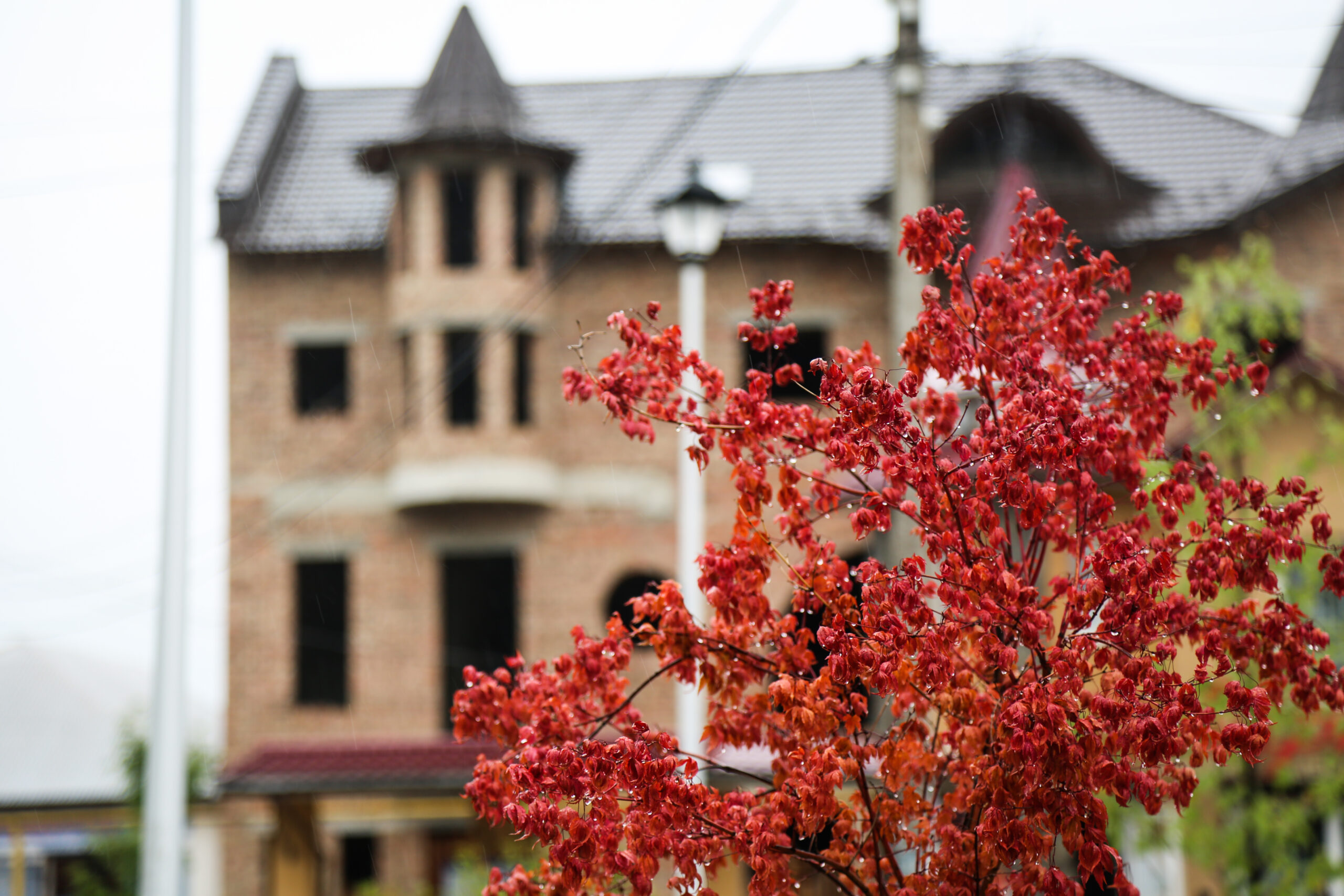 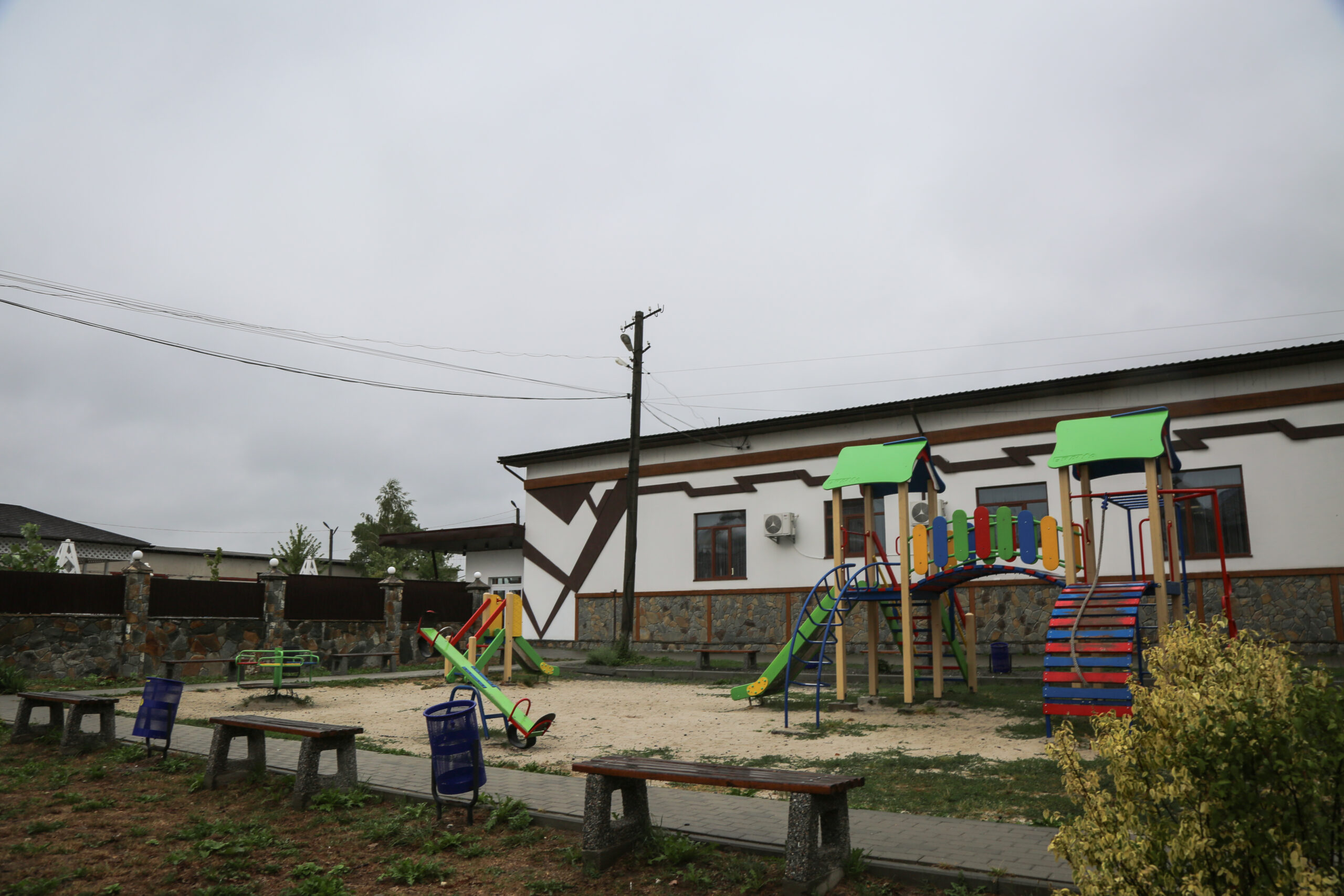 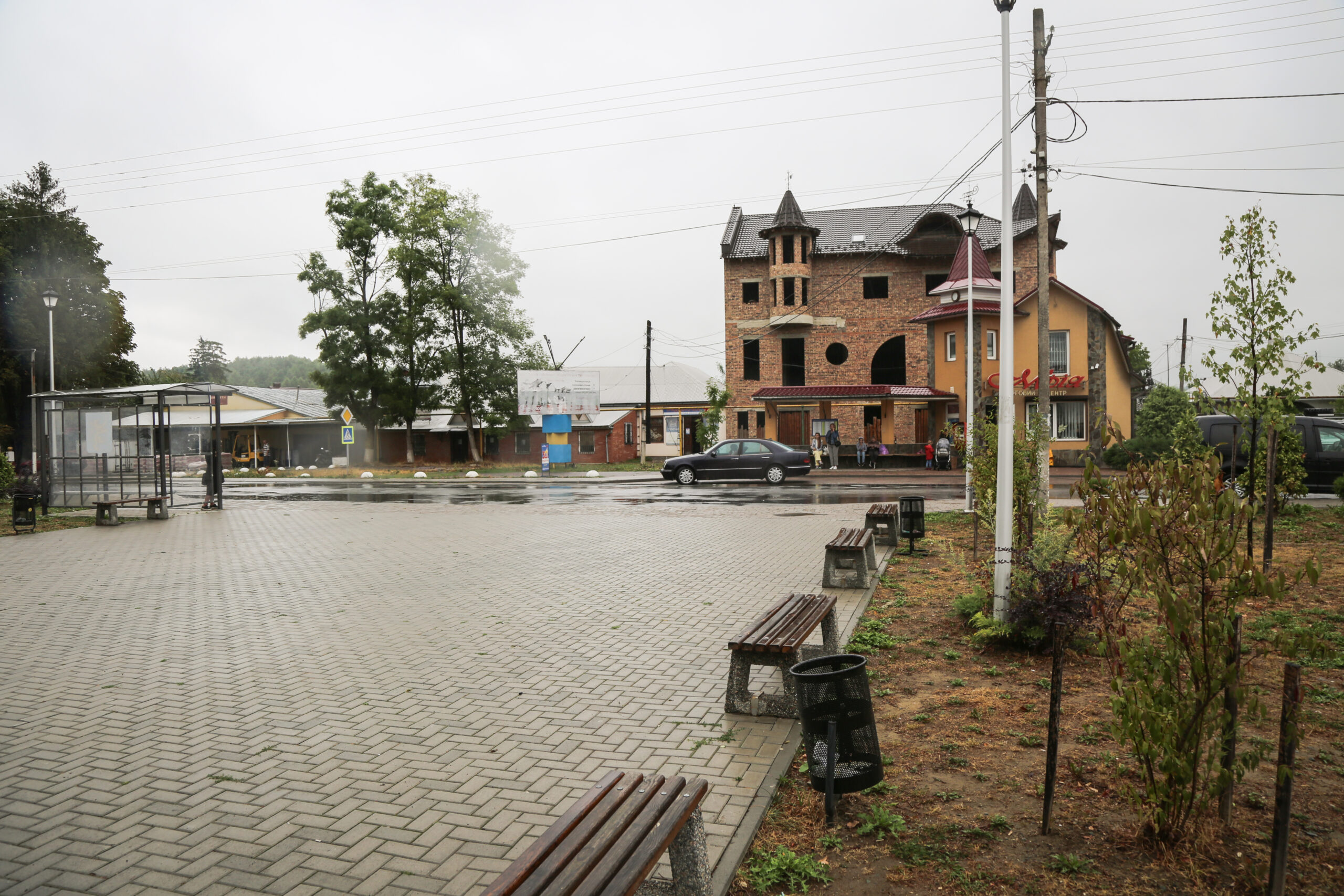 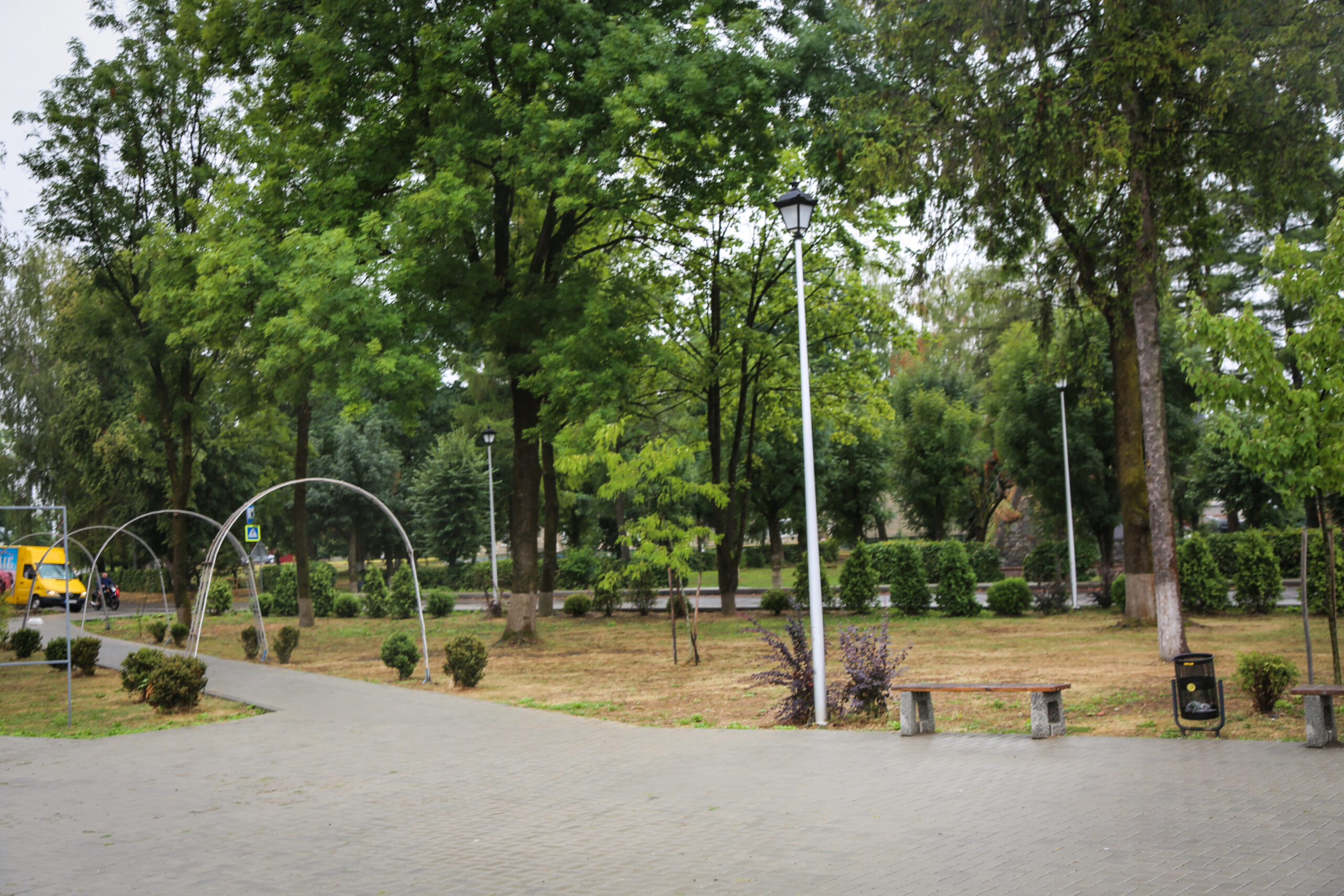 The community equipped a youth space, which has become a place of activity not only for young people. By the way, the youth of Pechenizhynska hromada also holds the mark of excellence: in 2019, the youth policy of the community was included in the top 10 best practices of youth work and was awarded by the Ministry of Youth and Sports. At that time, the youth of hromada were bypassed only by large cities: Dnipro, Kharkiv, and Kyiv.

Hromada for a Million

Pechenizhynska hromada gained recognition throughout Ukraine thanks to the victory in the Hromada for a Million television project. Having united all its residents around the idea, the community won and received a million hryvnias for its project. It spent the winnings on the creation of Fainyi agricultural cooperative for the cultivation and freezing of raspberries and wild berries. In particular, they equipped a shock-freezing chamber that works up to -28°C and a storage chamber up to -17-20°C. The cooperative now includes 12 people. 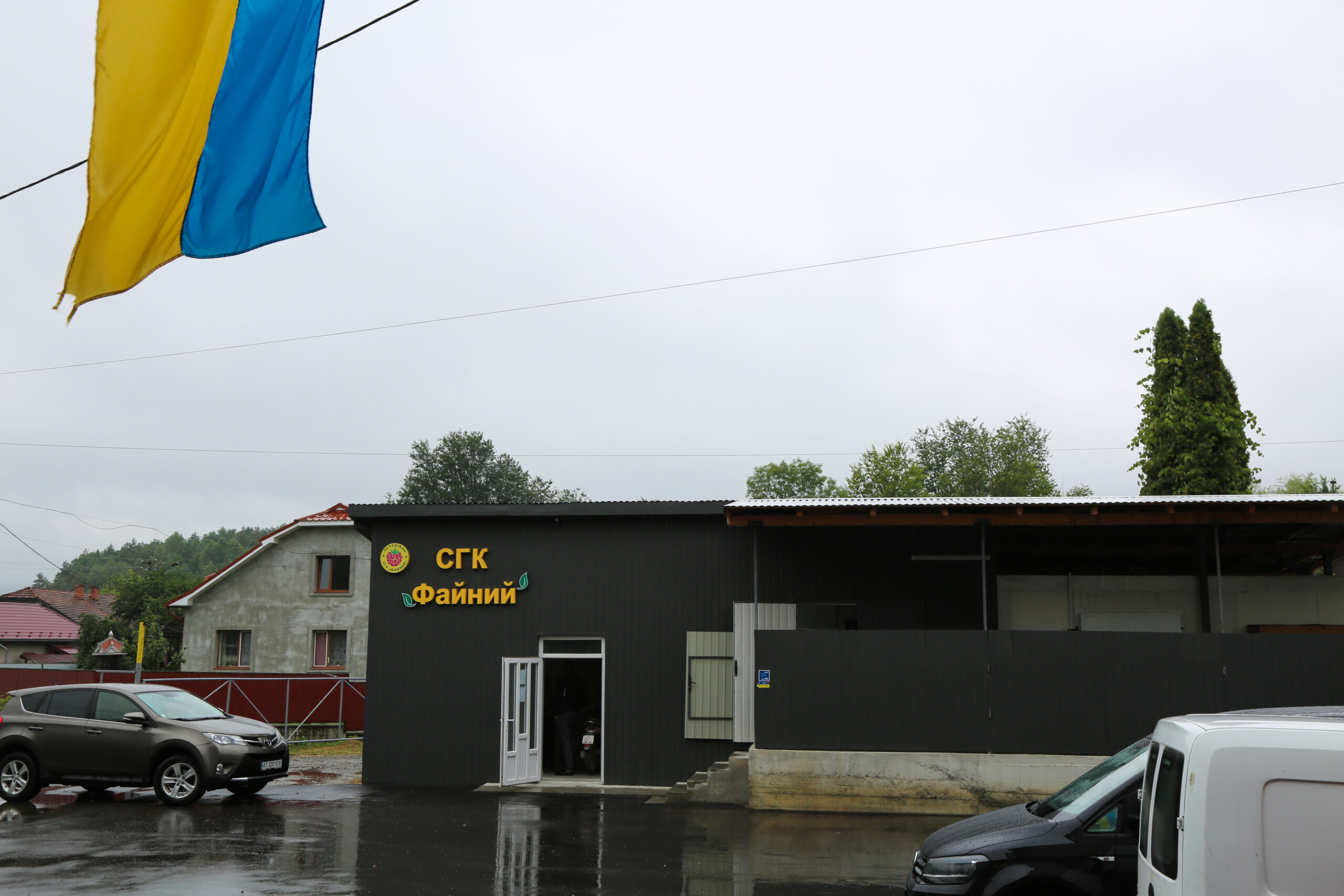 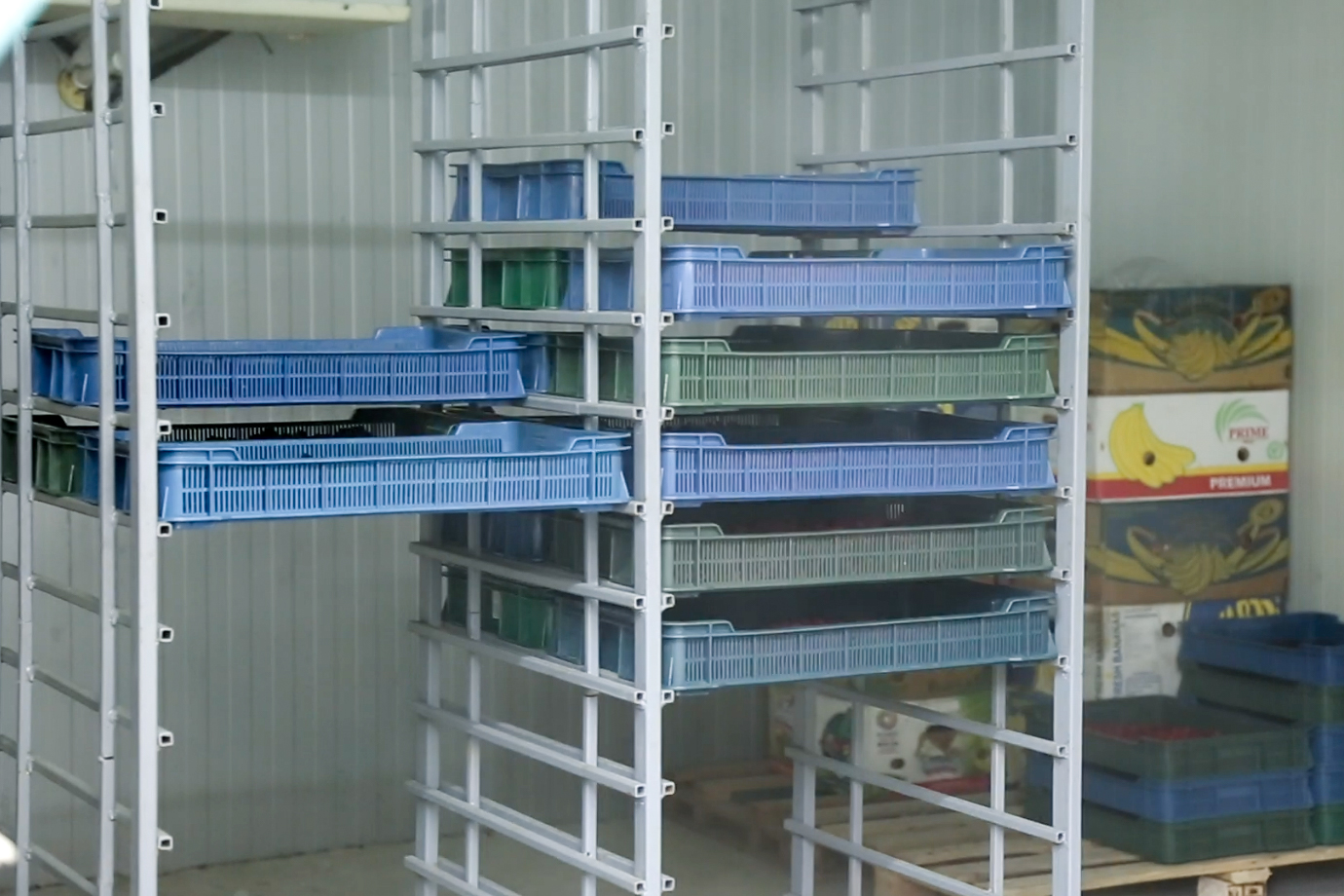 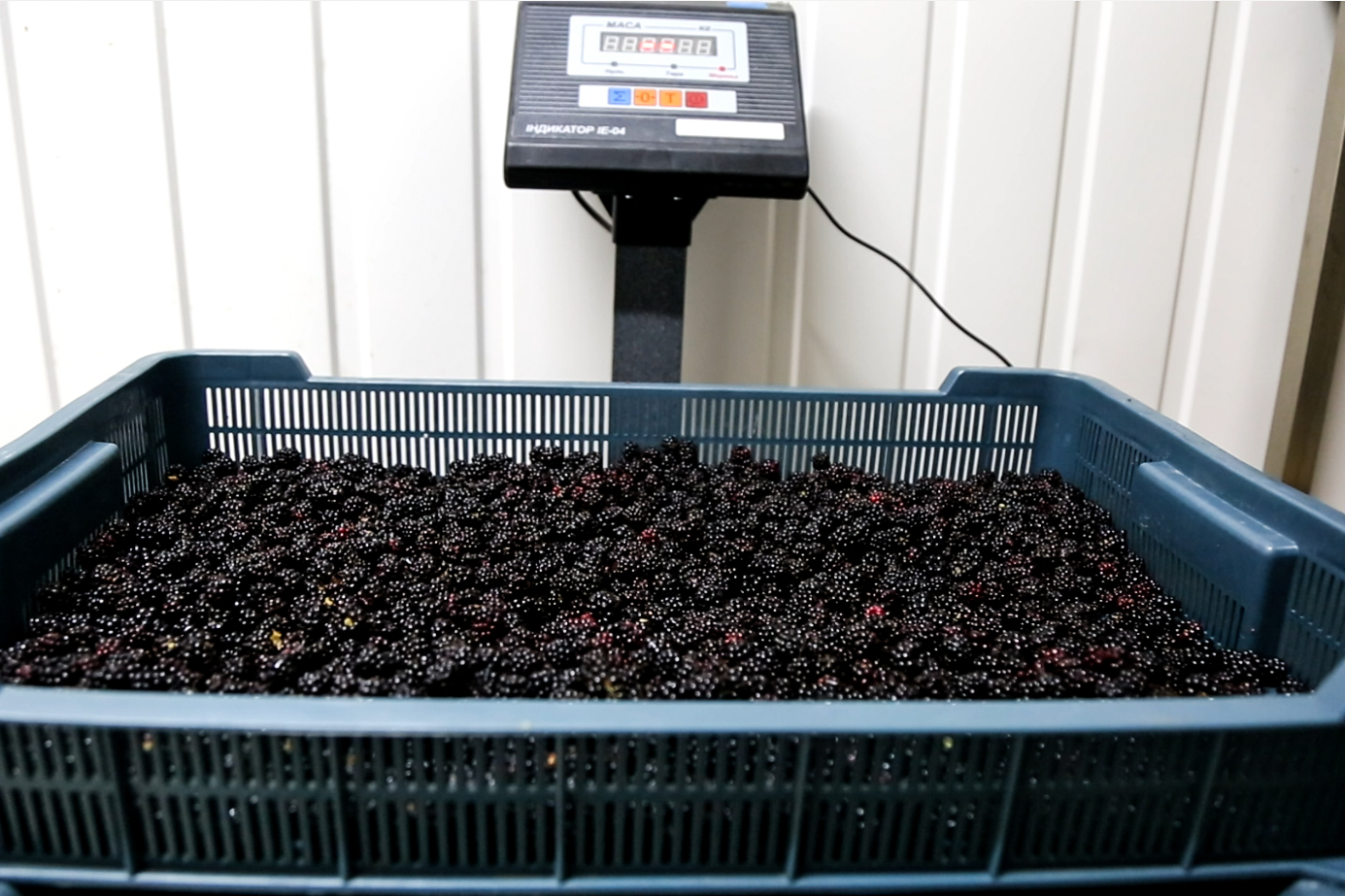 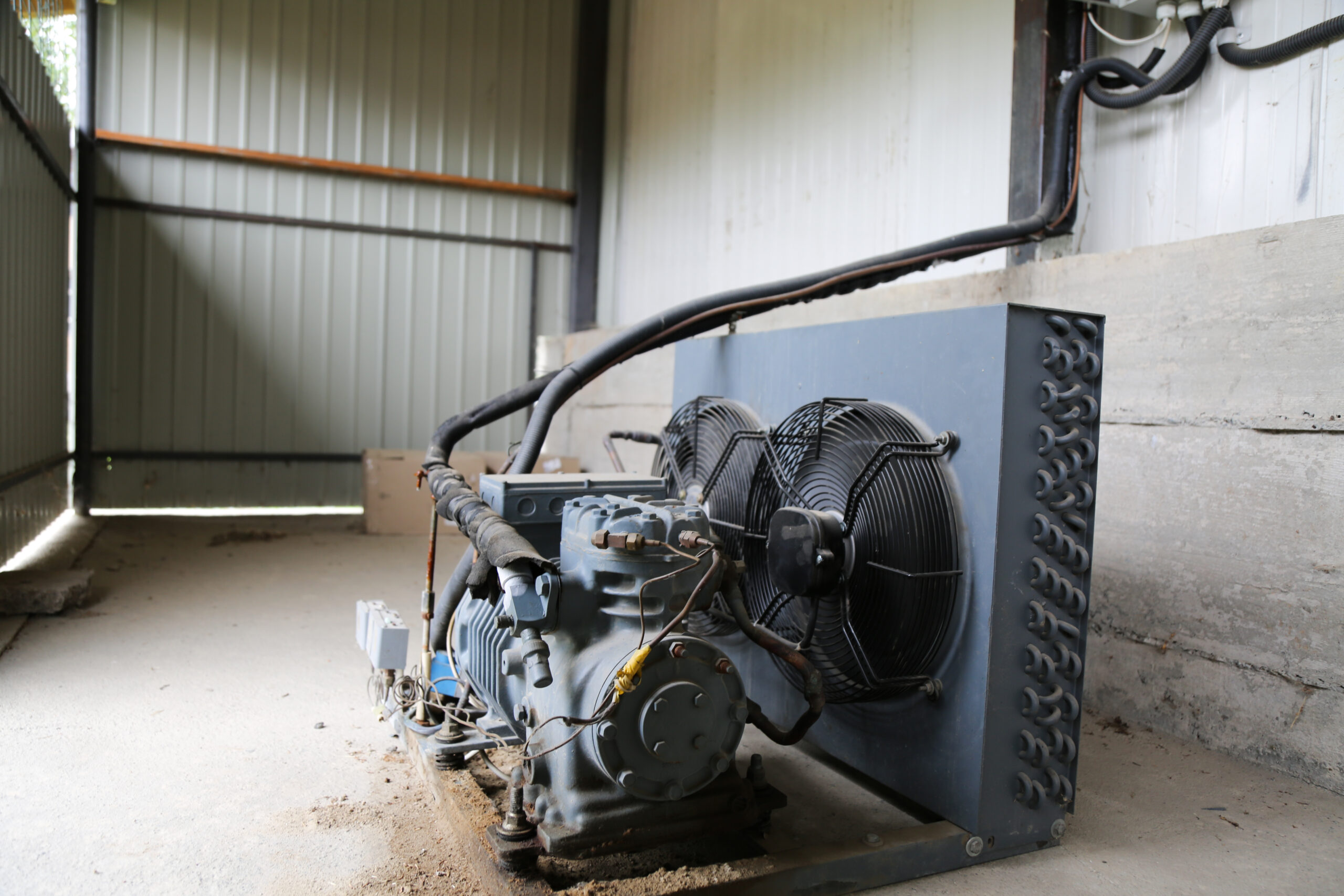 “The idea was for people to voluntarily unite and establish a legal entity in the community – a cooperative that pays a percentage of the profit from the activity. People can store grown products here, which would become unusable without freezing within 2-12 hours. The main victory thanks to this project is that people believed in themselves and the importance of cooperation. People can grow berries on their homestead and do not have to travel abroad to earn money. We are proud of this project,” says the head of the hromada.

According to the director of the cooperative, Kostiantyn Lapchynskyi, during the season, up to 20 tons of products pass through the cooperative – these are grown raspberries and harvested wild berries. Now the community dreams of expanding the cooperative into a logistics center to have its own trucks and refrigerators for transporting frozen products. This will help to establish sales markets, increase capacity and bring the cooperative to a new level of development.

And here is the war…

Pechenizhynska hromada was steadily planning its sustainable development, and suddenly the war intervened. The community, like everyone else, had to quickly respond to new challenges, but it was not known what to prepare for.

“The first thing we did was to hold an operational meeting with our communal institutions to understand what we have and what reserve is needed. We calculated the number of people we could accept and accommodate. We had about 500 places in communal facilities under the worst-case scenario. When it was understood that the flow of IDPs could be greater, it was necessary to form a resource and draw up contracts for the renewal of food stocks with private entrepreneurs, who were also limited in financing. We also made a call among the people: who could accept the displaced people? Residents supported the local self-government and took the burden off communal institutions and the local budget by accepting IDPs. If there is a need, we send a call in particular to starosta districtsiA part of the territory of amalgamated hromada (AH), which has one or several settlements (villages, urban-type settlements). In addition to the AH administrative centre, starosta district is determined by the local council in order to ensure the representation of the interests of residents of such a settlement (settlements) by the starosta., and we immediately understand how many potential opportunities there are to settle people,” said Oleksandra Dudinchuk, secretary of the council.

Due to online learning, schools had a certain supply of products, and at first, people helped with equipment for a living – they collected the first necessary things.

“Even though there were premises, heat, conditions, and products for which funds were allocated from the local budget and people responded, we faced a problem – where should people sleep? Thanks to the response of DOBRE Program, we got everything we needed,” says the head of the hromada Ihor Dovirak. 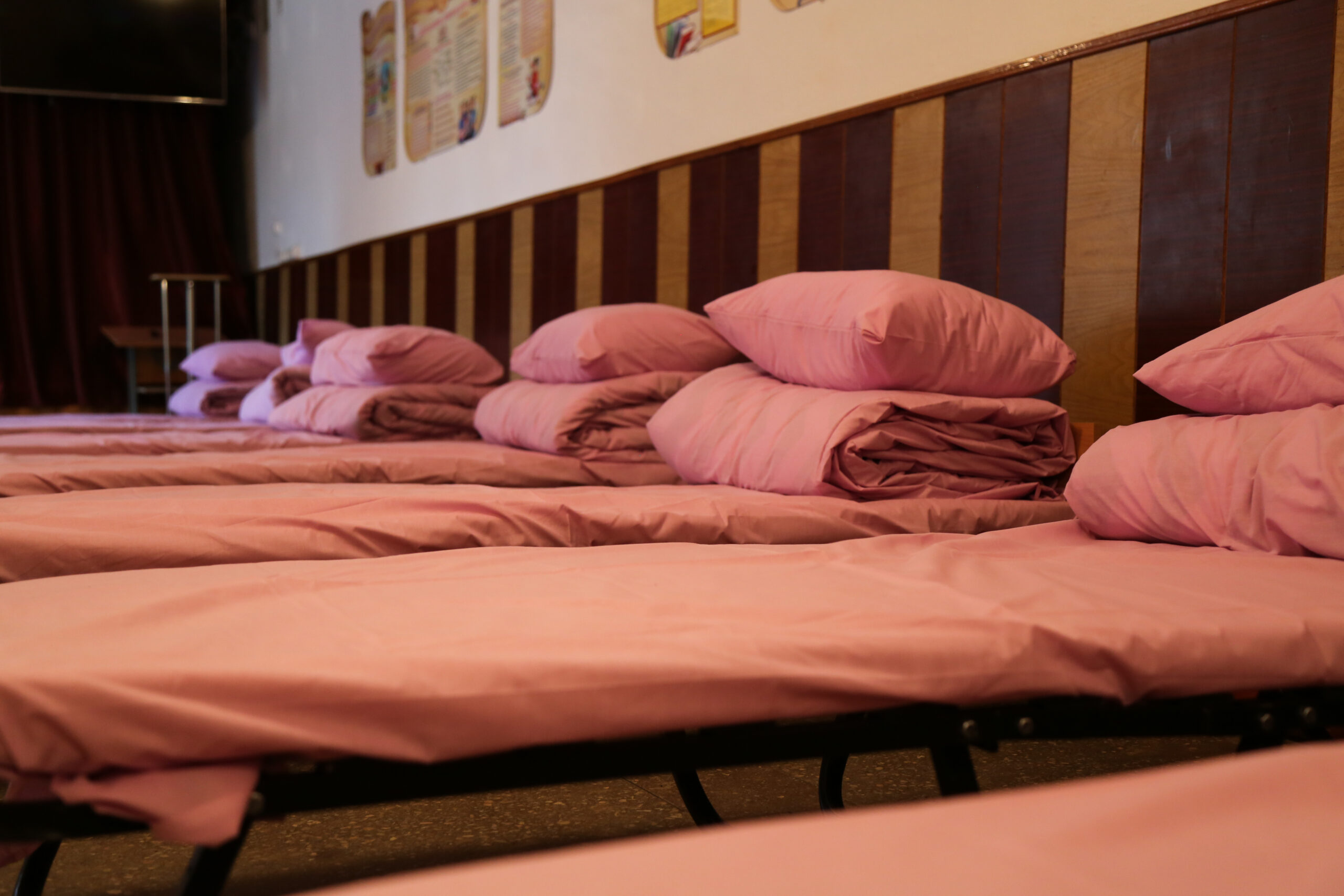 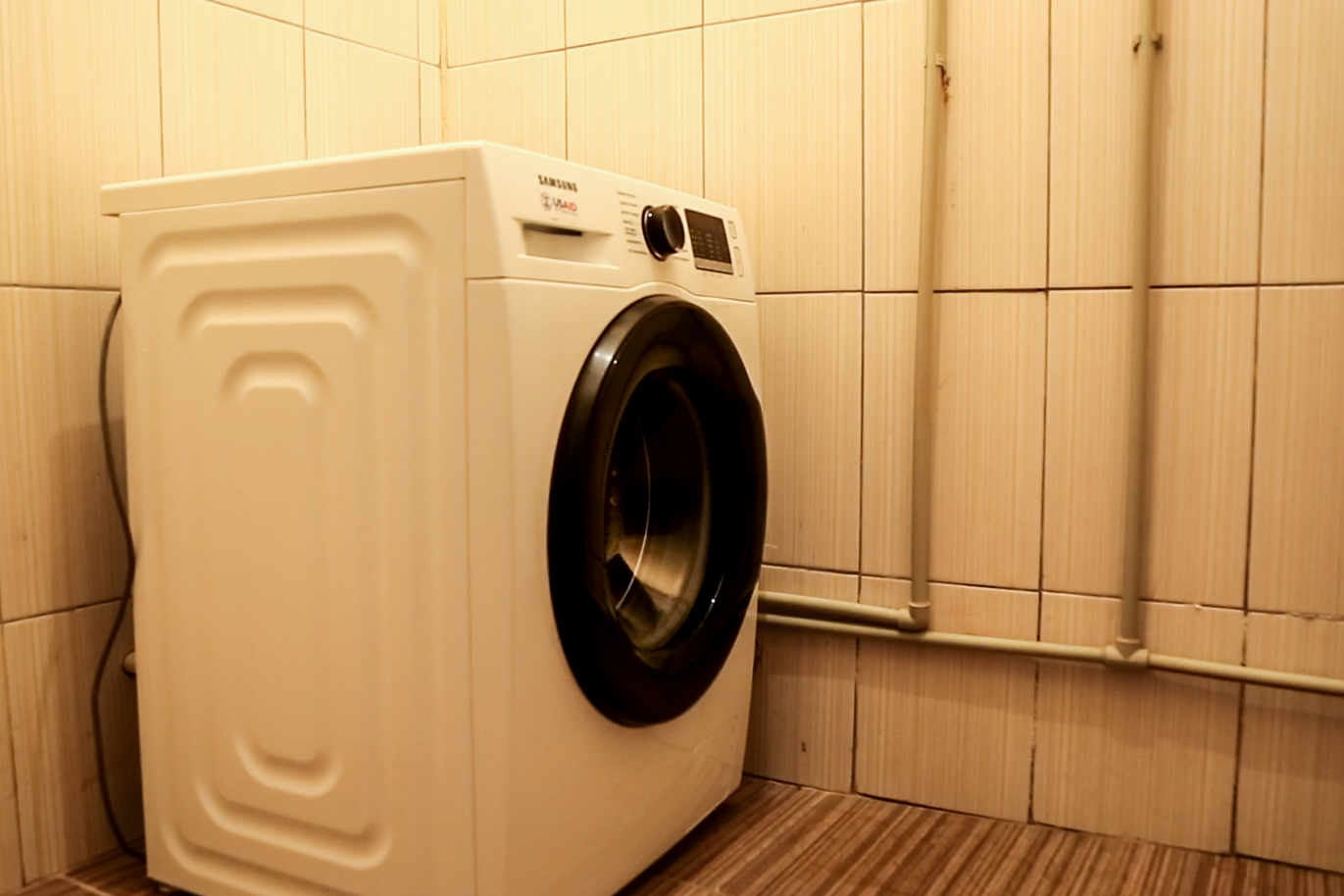 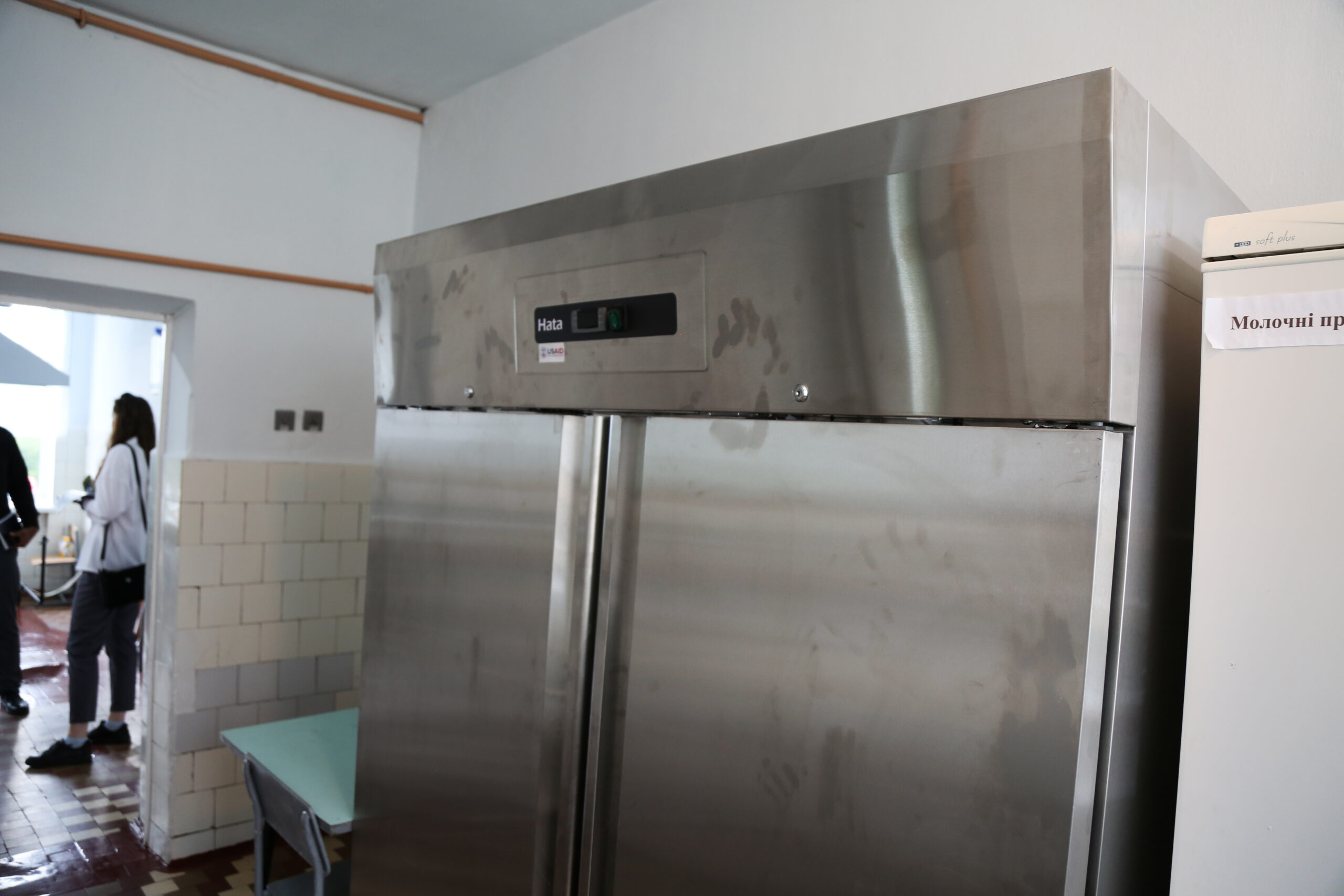 “Everything we received will be constantly in use”

Since the first days of the full-scale war, almost 3,000 displaced persons have passed through Pechenizhynska hromada. Almost fifty people lived in communal institutions for a long time, because the majority either came for a short time or settled in the private houses.

Pechenizhynska town hromada is now the fourth in rayoniRayon is a second level of administrative division of Ukraine, below region (Oblast in Ukrainian). after the center and large cities in terms of the number of IDPs. About 1,000 settlers remained here. Those who were the first to come from Kyiv, Sumy, returned home. Another part from Kherson, Donetsk, and Kharkiv live in private houses. A few left from Kyiv and Chernihiv, because they feel safe here.

Currently, no IDPs live in schools and kindergartens. All purchased aid was distributed among communal institutions according to needs to form a reserve. Any settlement has places for a long time accommodation if there is such a need. Meanwhile, schools are preparing for the beginning of the school year, so the kitchen equipment is ready to fulfill its purpose.

“When we wrote down our needs, we immediately understood that war is a temporary phenomenon. Therefore, we determined real things, which will be constantly in use and not lying in warehouses. For example, portable beds were chosen because they are more convenient to store when they are not needed, and they can be used in the future for any event: a school camp or for setting a glamping. We distributed all other equipment to schools and it will not be idle. Everything we received will be constantly in use. The assistance from DOBRE was the largest among all partners,” says Roman Shupiak, chief of administration of the executive committee of Pechenizhynska hromada.

The humanitarian center and its Palianytsia

“How to be useful to others?” – such a question was asked by the young people of Pechenizhynska hromada, who were not used to sitting idly by. Almost from the first days, they created a local humanitarian aid center. Based on the House of Culture, the center began as an aid warehouse for displaced persons seeking shelter in Pechenizhynska hromada.

“The first to arrive was help from people from the community who live abroad,” recalls Mariia Lutsak, co-coordinator of the humanitarian center and the head of DIIE. Good Ideas Unite NGO. Locals also brought help here – they organized the transport and collected vegetables and other products together. 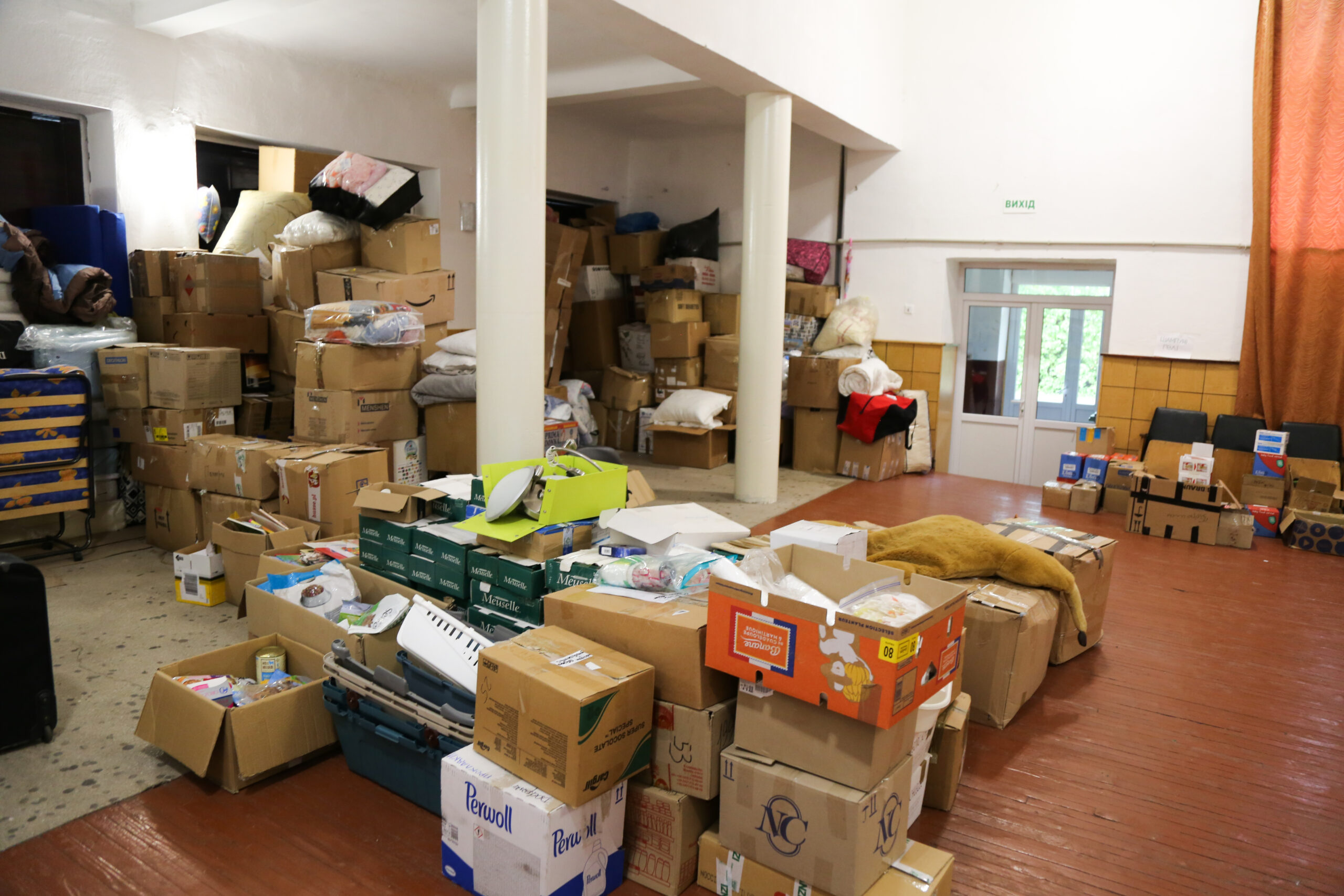 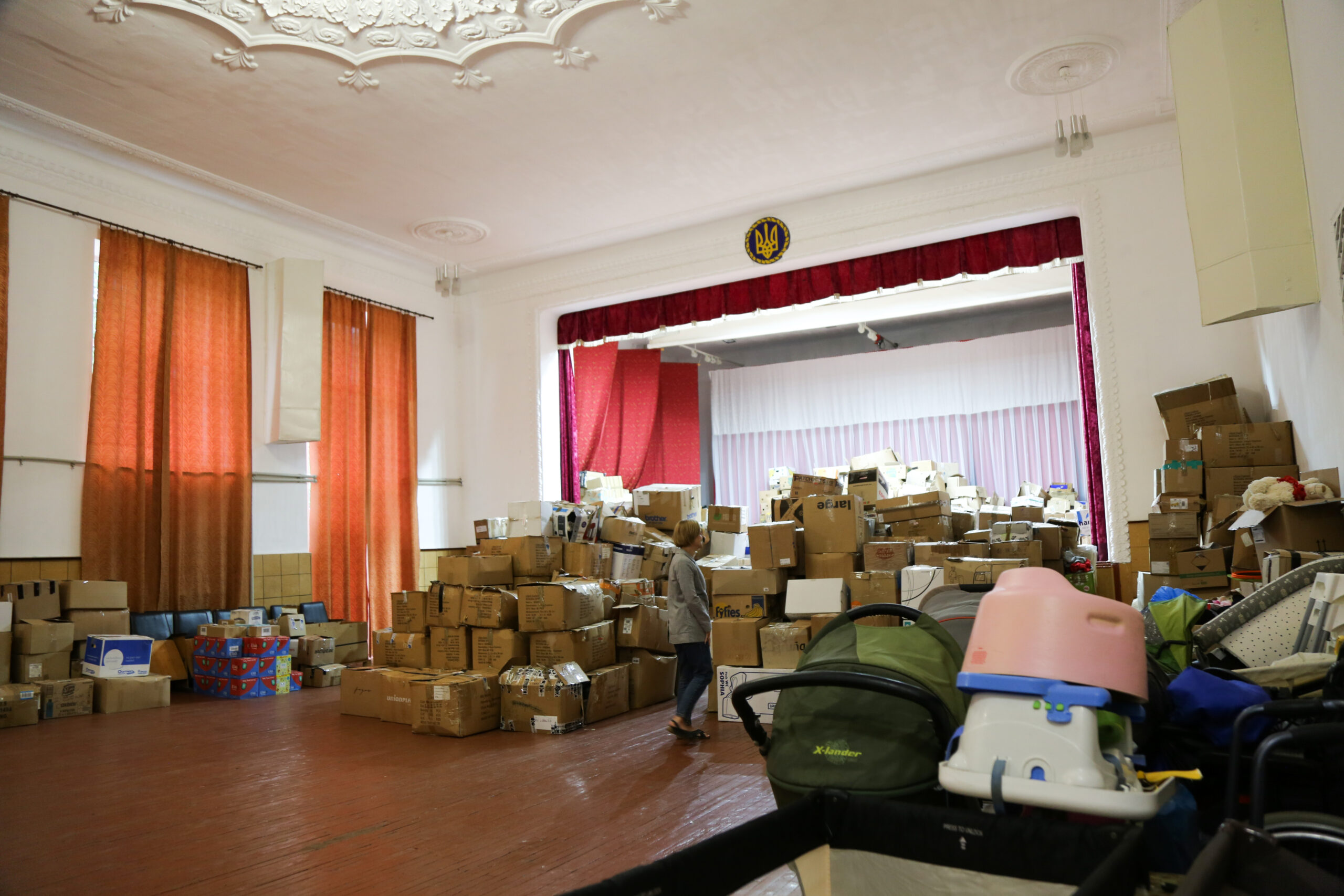 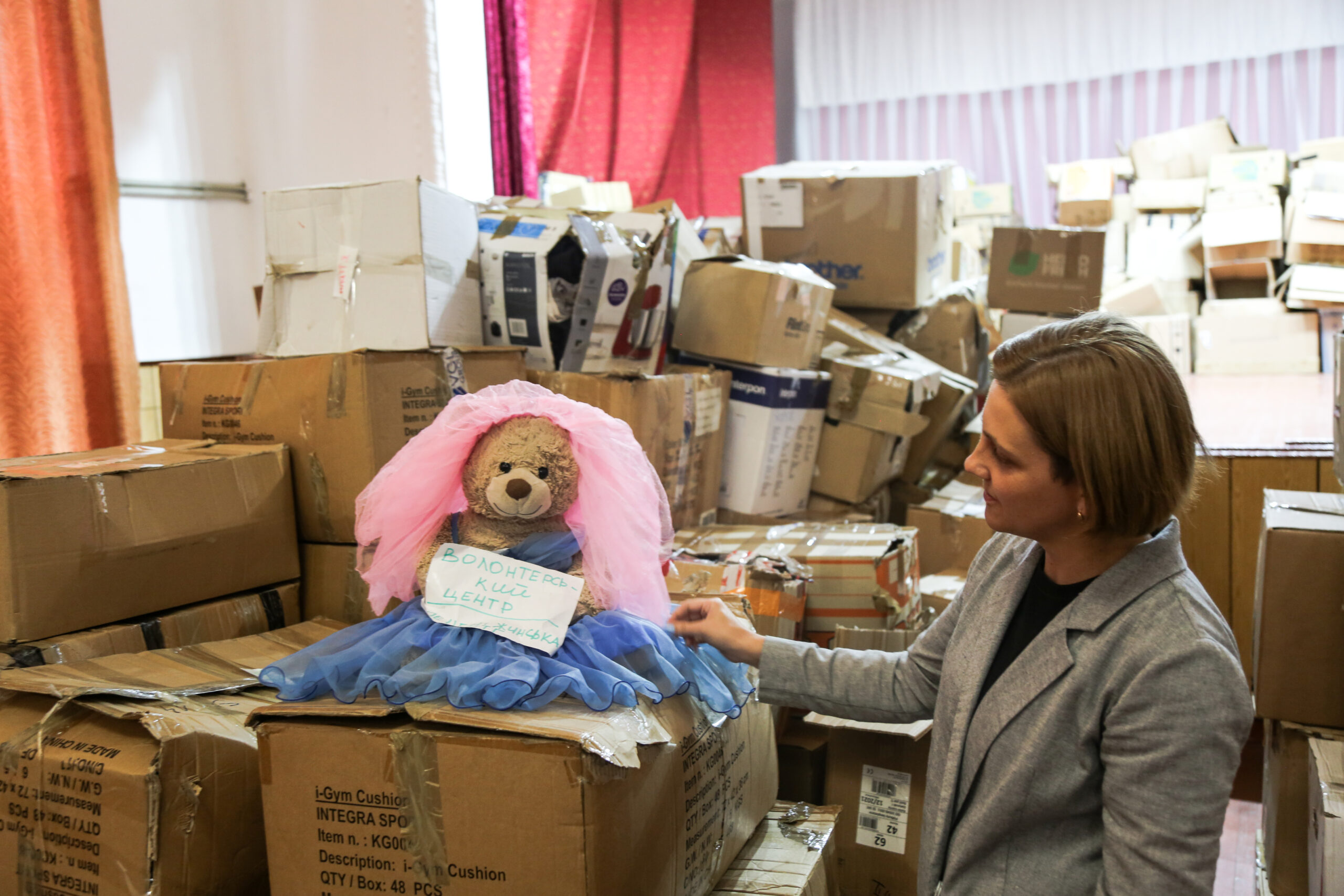 Having shown transparent and effective work, the youth began to attract more and more help from foreign partners. Poland, England, France, Italy, Spain, and Germany – this is far from a complete list of countries that transferred goods through the Pechenizhyn humanitarian aid center. In one of the trucks was Palianytsia – a soft bear that became a symbol and a talisman of the center.

In total, more than 200 tons of humanitarian aid passed through the community. Donors covered logistics and transport costs. In the humanitarian center, volunteers unload, sort, and distribute everything according to various needs. Mariia Lutsak says that over time the volunteers got used to unloading a multi-ton truck in a few hours.

Some of the items are displayed in the entrance hall for people who have settled in Pechenizhynska hromada.

Most of it is transferred to other hromadas that need help. In particular, the cargo goes to the frontline areas and communities where the displaced people live. Mariia Lutsak says that now, in difficult times, a network of friends who met at various events, in particular as part of USAID DOBRE, is actively working. Activists throughout Ukraine have established communication among themselves and are helping each other now.

“DOBRE gave us more than just equipment or beds. Thanks to the Program, we got a network of friends all over Ukraine. At the training, we got to know many men and women with whom we established cooperation in our volunteer centers and now we help each other,” says Mariia Lutsak, co-coordinator of the humanitarian center and the head of DIIE. Good Ideas Unite NGO.