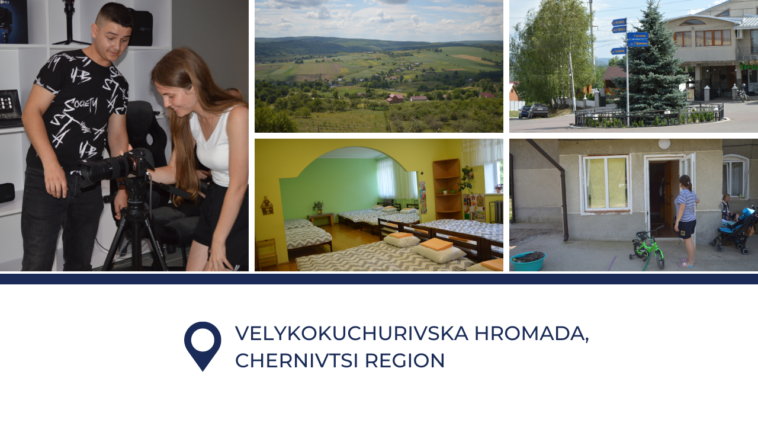 The Velykokuchurivska village hromada (community), which voluntarily consolidated in July 2015, was one of the ten communities that were the first to amalgamate in Chernivtsi region.

The community borders Chernivtsi, the regional center. Thirty kilometers from it, there is Porubne (Siret) checkpoint on the Ukraine-Romania state border.

The proximity of the border and the regional center to the community with the beginning of the full-scale invasion of the Russian Federation into Ukraine had a significant impact on the number of admitted internally displaced persons. In the first months alone, the residents of Velykokuchurivska hromada provided shelter to about three thousand IDPs from Kharkiv, Kyiv, Donetsk, and other regions.

Since the beginning of the Russian aggression, the administration of the hromada switched to 24-hour work. Residents and various charitable foundations helped significantly. First, people fleeing the war were settled in the premises of the school in the village of Hodyliv and private houses. Currently, all social housing and two administrative buildings in the settlements of Sniachiv and Hlybochok have been handed over for the needs of IDPs. Similarly, residents live in one of the buildings of the kindergarten in Velykyi Kuchuriv. A shelter for IDPs is being arranged in the second building of the local kindergarten.

The USAID DOBRE Program donated beds, mattresses, bed linen, washing machines and dryers, a generator, refrigerators, and dishes to Velykokuchurivska hromada. Assistance in the total amount of one million eight hundred and forty thousand hryvnias is addressed to people who found themselves in difficult life circumstances and were forced to leave their homes.

‘Driving under “Grads” and missiles’

We are going to meet new residents in the village of Hlybochok, which is a few kilometers from the administrative center of the community.

Kateryna is internally displaced twice. She was born in the village of Yehorivka, Donetsk region, and graduated from the Donetsk Pedagogical University, specializing in teaching Ukrainian language and literature.

When the war started in 2014, Kateryna left for the city of Vuhledar, got married there, and gave birth to two children. The full-scale invasion forced the woman to move to her parents in Yehorivka, but then she realized that her native village was getting closer to hostilities. The family returned to Vuhledar, but the Russians began shelling it with missiles in March. Kateryna spent three weeks with her preschool children in the basement of the sports school.

Acquaintances offered to go out by car. ‘We were preparing for departure under stress, we took out what we managed to put in our bags. Three families were getting away under “Grads” and missiles,’ says the woman.

Acquaintances who had already fled here from the war advised them to stay in the Velykokuchurivska hromada of Chernivtsi region. Katia and her family were accommodated in the former premises of the village club. Besides them, two more families live here. The community helped to bring water to the temporary shelter. With the support of international funds and, in particular, the USAID DOBRE Program, it was possible to provide internally displaced persons with furniture, a microwave oven, and kitchen equipment.

Kateryna says she plans to stay in the hromada and has even found a job as a teacher’s assistant at one of the community’s schools, while her husband works as a rescuer at the local emergency department.

‘We dream of our own separate house. The older boy will go to the first grade this year. I plan to send the younger one to kindergarten. Children need their own space, tables for classes, and a calm atmosphere,’ the woman admits.

We meet nineteen-year-old Oryna, who left Donetsk region with her family because of the war, during a photography master class at a local media co-working space.

Media coworking is one of the activities of the Center for the Development of Social and Youth Entrepreneurship, created in the community together with the DOBRE Program.

Imagine that you enjoy taking photos or making videos, and you would like to do it professionally and earn money from it. In this media space, you will be able to learn the secrets of creating media content. Here they will show not only how to take photos or shoot videos, but also teach how to edit and voiceover them.

“I really liked holding the camera in my hands, learning about its different modes of operation, taking unusual food photos. Today we took pictures of strawberries and threw them into an aquarium with water. I was just capturing this moment. For high-quality photography, you also need properly selected lighting and, of course, professional cameras. I will definitely come here again,” Oryna shares her impressions after participating in the master class.

The media space is equipped in such a way that it can be used as a study room, a temporary workplace, and a filming studio. Overhaul and modern design were made with hromada funds, and the DOBRE Program purchased professional equipment.

‘Here we have everything necessary to teach how to take photos or videos of various types, perform editing, processing. We also learn how to set up the equipment correctly. Look, we have cameras, lighting equipment, laptops, and action cameras. It’s all modern equipment that’s nice to work with,’ says 21-year-old Stepan Ternovetskyi, the initiator of the media coworking space, a specialist in information technologies, and a member of the hromada’s Youth Council.

Here it becomes clear that residents are an important resource for the community. Therefore, with the support of the DOBRE Program, a lathe and carpentry shop with modern equipment will soon be operating in the Center. Highly qualified specialists will teach everyone who wants to master a new field of employment or improve their professional level. The community is convinced that there will definitely be work for such specialists.

Strengthen the capacity of communities

A voluntary amalgamation 7 years ago allowed the community to get considerable assistance from the state in the form of an infrastructure subsidy, which was used for the overhaul of educational and medical facilities. However, the people of Velykokuchurivska hromada are not only counting on the state.

Here we heard about local know-how. Residents pay voluntary contributions for the maintenance of communal services every year. 300 UAH for pensioners and 500 UAH for those who work. These funds are added to budget and used for supplementary road repair work, outdoor lighting, and area cleaning. Residents very carefully monitor the use of their contributions and the quality of work.

Everyone who comes to the community will definitely be impressed by the cleanliness, good roads, and modern private houses. The informative street signs, made in the same style, catch the eye. This not only beautifies the territory of the hromada but also allows you to freely navigate the streets of populated areas. Safety is taken care of here: cameras are installed in the community, which help not only to prevent crimes but also, for example, to monitor the condition of the roadway during the winter.

By the way, the community has beautiful views: hills and forests. The residents of the Velykokuchurivska hromada decided to also use the natural uniqueness and created a pedestrian and bicycle route, arranged with recreation areas – gazebos and elements of tourist navigation. This is also the result of the implementation of the Youth Council of the hromada and the DOBRE Program joint project. Anyone who wants to explore the local natural and historical beauty can rent mountain bikes and protective equipment. Rental is free for IDPs.

Even during the war, the community and the DOBRE Program continue to cooperate: they implement a project to modernize street lighting to create comfortable and safe living conditions. As part of the project, 600 lamps will be replaced with modern LED lamps along local roads with a total length of 25 kilometers.

Vasyl Toderenchuk, the Head of the Velykokuchurivska village hromada, says that during the last year of cooperation with the DOBRE Program, the capacity of the community has been significantly strengthened.

‘Together with Polish and Ukrainian experts, we designed and approved the Development Strategy, learned how to write projects and find a common language with residents, and improved communication and cooperation with representatives of local businesses. We participated in various training programs that help to work openly and transparently for the benefit of people and provision of quality services,’ the head of the hromada noted.