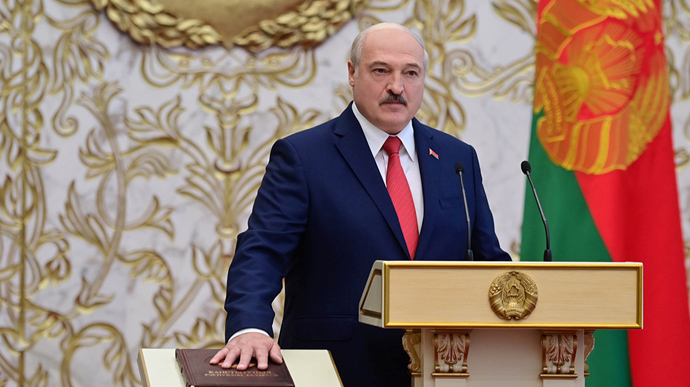 On September 23, in Minsk Aleksandr Lukashenko was sworn in as Belarus President in a secret ceremony. On the evening of that same day, the Foreign Affairs Minister of Ukraine Dmytro Kuleba commented that Lukashenko’s “inauguration” doesn’t make him the legitimate president of Belarus. Does this statement also imply that Ukraine does not recognize the Belarus election results? How strong is the statement? What are its implications for the Belarus-Ukraine relations? Read on.

“Ukraine has never interfered in internal affairs of Belarus and will always support the Belarusian people. Taking into account the election campaign and what followed, today’s ‘inauguration’ of Lukashenko does not mean his recognition as a legitimate head of Belarusian state,” Minister Kuleba twitted. A screenshot of his tweet was later posted on the Facebook page of the Foreign Affairs Ministry of Ukraine.

Implications of the statement. Kyiv has thus joined the West in not recognizing Aleksandr Lukashenko as the legitimate president of Belarus. The bilateral relations have been actually put on hold, foreign policy experts said commenting on Dmytro Kuleba’s statement on Lukashenko’s “secret inauguration”.

Position of the EU as a benchmark. Alyona Hetmanchuk, director of the “New Europe Center”, commenting on the Minister’s statement to the BBC Ukraine said: “Dmytro Kuleba’s tweet should be taken as the official position, it is a confirmation that Ukraine bends towards not recognizing Lukashenko as president, and that it takes as a point of reference the position of the European Union in general, and that of Germany and France in particular (instead of a harsher position that Lithuania and Poland uphold).”

“Refraining from direct phrasing like ‘Ukraine does not recognize Lukashenko as the Belarus president’ is rather explained by reasons that concern the international law, than an intention to maneuver or get to diplomatic trickery. A certain proof that Ukraine does not recognize Lukashenko (as president) is the fact that Zelenskyi did not congratulate him.”

“A statement that is too harsh”. Roman Bezsmertnyi, Ukraine’s former Ambassador to Belarus, in a comment released to the BBC Ukraine, called Kuleba’s statement “too harsh”.

“Minister Dmytro Kuleba made the strongest possible move in the situation. Diplomats even think that the statement was too harsh. He reflected on the developments in Belarus after the election and the actual bilateral relations.”

“Though the final conclusion on Belarus is to be made and voiced by the head of the state or an agency empowered to assess it.”

“Ukraine’s actual non-recognition of the Belarus president creates no tragic problems, that’s what diplomatic relations and protocol is for. The states may be at war with each other, but until the relations are severed, diplomats have to communicate. The task of the ambassador and diplomat is to work on the relations in extreme conditions.”

“It is possible to make contacts at the governmental level while avoiding contacts with the President. Ukraine has had presidents who did not talk to Lukashenko. That is no tragedy to inter-state or inter-personal relations,” Bezsmertnyi said.

Position endorsed by President Zelenskyi. Pavlo Klimkin, Ukraine’s former Foreign Affairs Minister, told the BBC Ukraine that the statement by the foreign policy chief is a cautious diplomatic version of what Ukraine had to say about Lukashenko’s “inauguration”. At the same time, the former minister said that the Ukrainian statement was not as clearly phrased as statements by the EU member states.

“No different statement was possible, otherwise we would be ridiculous. A miserable farce took place in Minsk. If we had kept quiet, we ourselves would have become ridiculous for all our partners and friends. Secondly, this position is linked to the game around the changing logic concerning the Minsk platform and the reboot of the peace talks. As for the form in which the statement was made, digital diplomacy has long been a matter of fact, regardless of our attitude towards it. Take Trump’s Twitter. What appears on social media and official pages is considered to be the official position,” the diplomat underscored.

“A freeze in relations”. Political analyst Volodymyr Fesenko is convinced that the statement is a sign of a freeze in relations between the two countries. “A statement on the inauguration that Dmytro Kuleba made is Ukraine’s official position. That’s fine and that’s enough. The Office of the President could have consciously initiated the statement, in order to decrease tension and avoid a conflict in the bilateral relations. On the other hand, it might have served to demonstrate a coordinated action with European partners.”

“The Office of the President kept certain possibilities to maneuver, to be then able to maintain some contacts. It is also clear that there is a freeze in the bilateral relations, we will see them on hold for some time. The traditional inter-state regional forum that was supposed to be held soon, is the first victim. The President will not attend it, official visits would be inappropriate now. And the forum itself loses its meaning.”

“I guess, in the coming months, Zelenskyi will not recognize Lukashenko as president. However some official or unofficial contacts with the Belarus administration can stay. Direct contacts, the way they were before, will no longer take place.”