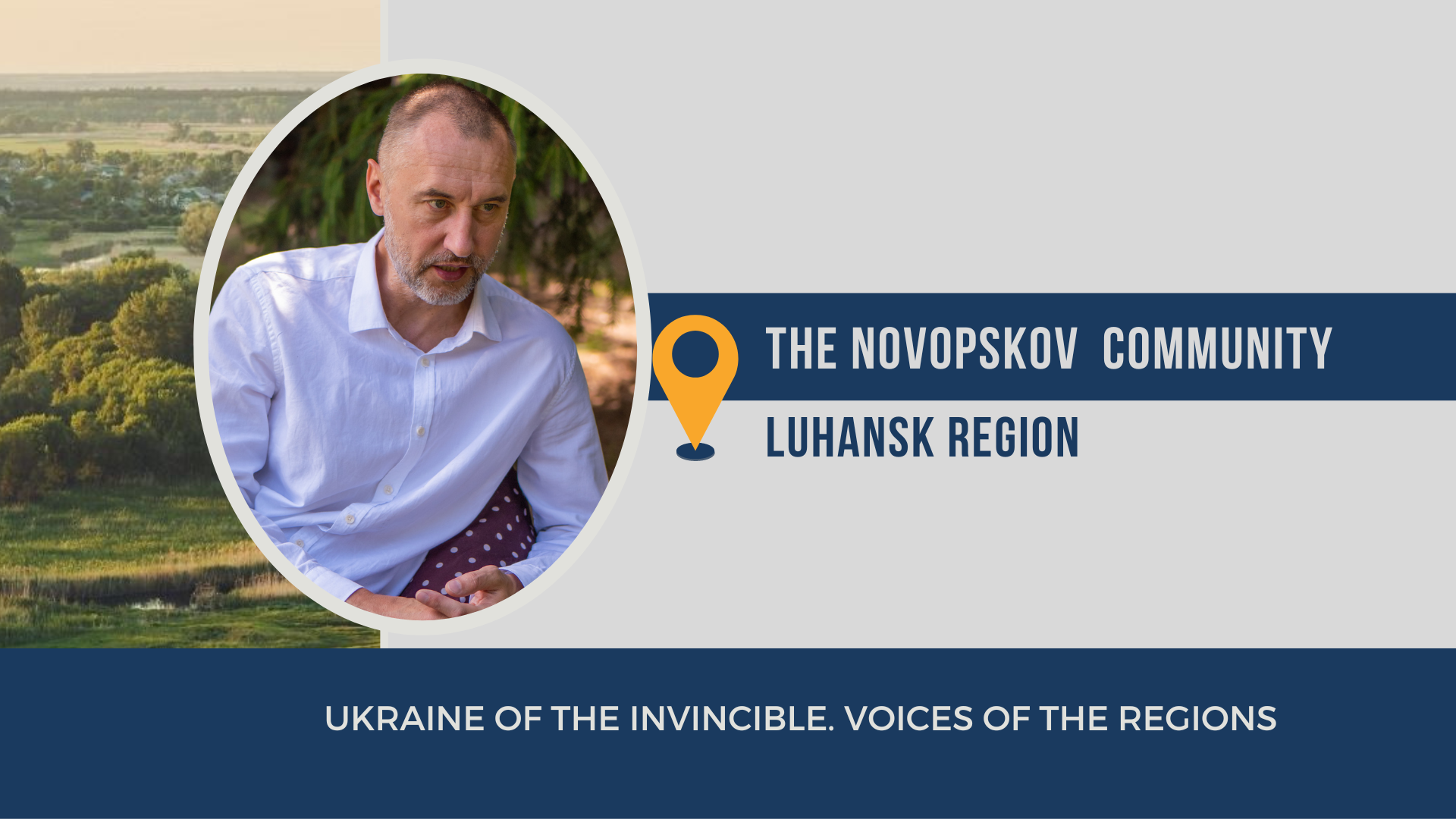 The Novopskov town territorial community was formed in 2015 by merging the small town of Novopskov with 6 villages of the Osynove village council. It covers the area of 226 square kilometers. Before the war 12,000 people lived there. This is one of the largest hubs of Ukraine’s gas transportation system, through which Russian gas is transported for export to the countries of Western Europe. The border with Russia is about 35 kilometers away.

We met the town head Vadym Gaiev in one of the parks in Dnipro, where the town council had evacuated. He is local – born in Novopskov. He finished school in Russia, where his parents went to earn money. But right after finishing school he returned to his Motherland. He studied at a construction college and engaged in private entrepreneurship. Until the last he didn’t believe that the war would break out.

Went to sleep in peace and woke up in war

There were no direct hostilities on the territory of the Novopskov community. The occupants entered the town when only the National Police remained there. The border guards were ordered to withdraw and take other positions. There was no destruction when they entered.

“I understand that the roads will suffer due to the movement of a huge amount of heavy military equipment. Russians drive along central streets, do not bypass villages, although there is such a possibility. In my opinion, this is such an additional tool of intimidation, psychological pressure.”

Vadym Gaiev recalls how February 24 began for him.

“I want to say this not as the head of the town council, but as a citizen, a resident of Novopskov. I went to bed on February 23, and I had no idea that this would happen. I did not believe there would be war. Many local businessmen and politicians also say they did not believe. They thought it was a rattling of weapons, intimidation, that they were raising stakes for further negotiations. I did not think it would be so large-scale, with missiles, tanks. That’s why it is true. Nothing was done to prepare and organize the work of the town council under those conditions.”

“The rallies in the first days after the occupation showed that people weren’t afraid of the occupation. They showed they weren’t a herd, but citizens with their own position who were included in the processes. And only gunshots stopped them. When the second rally was shot, people realized that a horde had come that didn’t care about anything except the language of guns, machine guns. They can’t talk, can’t appeal, and can’t communicate. They cannot even explain why they are here. The occupants used trite phrases, clichés, they said: “They abandoned you; we’ve come to protect you.” And people answered: “No one has abandoned us, everything works here.” All the processes launched in previous years were so sustainable that after the occupation, all structures, all communal enterprises functioned in the town for two months.”

Now Novopskov lives in an atmosphere of fear and lawlessness. Strangers can come to your home and conduct a search without explanation, take away the things they like. People disappear, and it is not always formalized by fake courts. Sometimes a person happens to be missing, and no one can explain where they are.

“Of course, there are other problems. For example, the unfair hryvnia exchange rate. The occupants are pushing out our currency, replacing it with their ruble. People who receive money on cards of Ukrainian banks have very big problems when they want to use the money. They have to pay rapacious interest in order to withdraw the money, and then exchange it at an unfair exchange rate. I saw pictures of hundreds of people standing in front of so-called “entrepreneurs” who were “helping” to withdraw cash. I understand that many in that area got rich because of the war, but the vast majority of people suffered. People are used to having an alternative. In Ukraine there were several operators and many Internet providers. And people had the right to choose which tariff was better for them, who had better services. People could move freely around, but now there are some strange checkpoints, curfews, passes.”

Fortunately, the document flow was converted into electronic form in advance.

“We have preserved all statutory and permit documents, and digitized all archives. We can now give people any certificate, any decision, order. It is available online. When we launched the work of the town council in the Ukrainian government-controlled territory, in Dnipro, everything went smoothly.”

Vadym Gaiev is very proud of his community, it is felt during the conversation – the way he talks about his hometown and the townspeople. In his opinion, the reforms implemented in Ukraine worked for people’s benefit: they were given the opportunity to participate in the life of the town and the community. People realized that they had the right to their own opinion, to participate in decision-making, which affected the quality of life.

“This is already my second term as the town head of Novopskov. I ran for the first term in 2015, I was elected quite easily. I worked for 5 years, in fact, in parallel with the implementation of the decentralization reform in Ukraine. It was a very useful experience, not only for me, but also for our whole community. We implemented a lot of wonderful, great projects, developed infrastructure,” says Gaiev.

Each of the projects implemented in Novopskov made a difference for the town.

“I can honestly say that our projects were the brightest. In 2021, we reconstructed the Budivelnyk stadium, it was a cool project. In 2021, we launched a major renovation of our hub school – the largest school in the community. The cost of this project was about 40 million hryvnias, and it was supposed to be finished by September 1 of this year.”

Besides, the construction of two large-scale roads to Markivka and Starobilsk was started in the community. In addition to large projects, there were many smaller ones that became usual for residents of the community – modernized sports and children’s playgrounds.

“People scarcely noticed those projects, regarded them as a necessary attribute for comfortable life in one or another territory. The occupants did not see those things in their homeland.”

But currently, all those facilities that were built and repaired before February 24 are either exploited or looted by the occupants.

“I will give you a specific example. We have a small school in the smallest settlement of our community – the village of Makartetyne with a population of about 280 people. Following the logic, we had to close the school because of its low occupancy rate. But we held consultations with the village residents and realized that we could not offer the children a decent alternative, because the road to the hub school, where they were supposed to be taken, was in an unsatisfactory condition. Besides, we could not afford another school bus for the community at that time. Therefore, we decided to preserve the school, and to provide it with everything that any other school in our community had. When we bought interactive whiteboards for the community, they also went to that small village school. If overhead projectors were purchased, they were also provided to the school in Makartetyne. The same goes for computer and printing equipment. We introduced the new Ukrainian school throughout the community. A week or two ago, we learned that the occupants had come and taken away all those interactive boards, all the equipment and inventory. Even modern new furniture was taken away. What remained were the old desks covered with 30 layers of paint that were taken out of the pantry. Like that”.

Many residents of the community had and still have Vadym Gaiev’s mobile number, which played a bad joke on some people.

“That’s true that the locals have my phone number. A lot of people faced trouble when they crossed the Russian border into the territory of Ukraine or Europe. When orcs found my phone number, hours-long questioning took place: “Why do you have his phone number?” And when they say that we all have a head’s phone number, the occupants don’t believe it. They believe that a person has some business, connections, common interests with me. Many people came across unpleasant conversations precisely because of my number in their phones.”

The community head believes that he will return home sooner or later.

“The day the war ends, I will be home. The end of the war will not find me anywhere but my Novopskov. I think that the same work will continue, and the pillars on which it was built will remain. All those democratic processes, the inclusion of people in public life, the reconstruction of infrastructure will continue to be implemented on the territory of our community. I believe that this was the right direction of our development, a well-written strategy of the community. We will continue everything, and let people feel that they are full owners, masters of their land, those on whom its development depends. That’s what we’ll do.”

Interview is prepared within the project “Countering Disinformation in Southern and Eastern Ukraine” funded by the European Union.