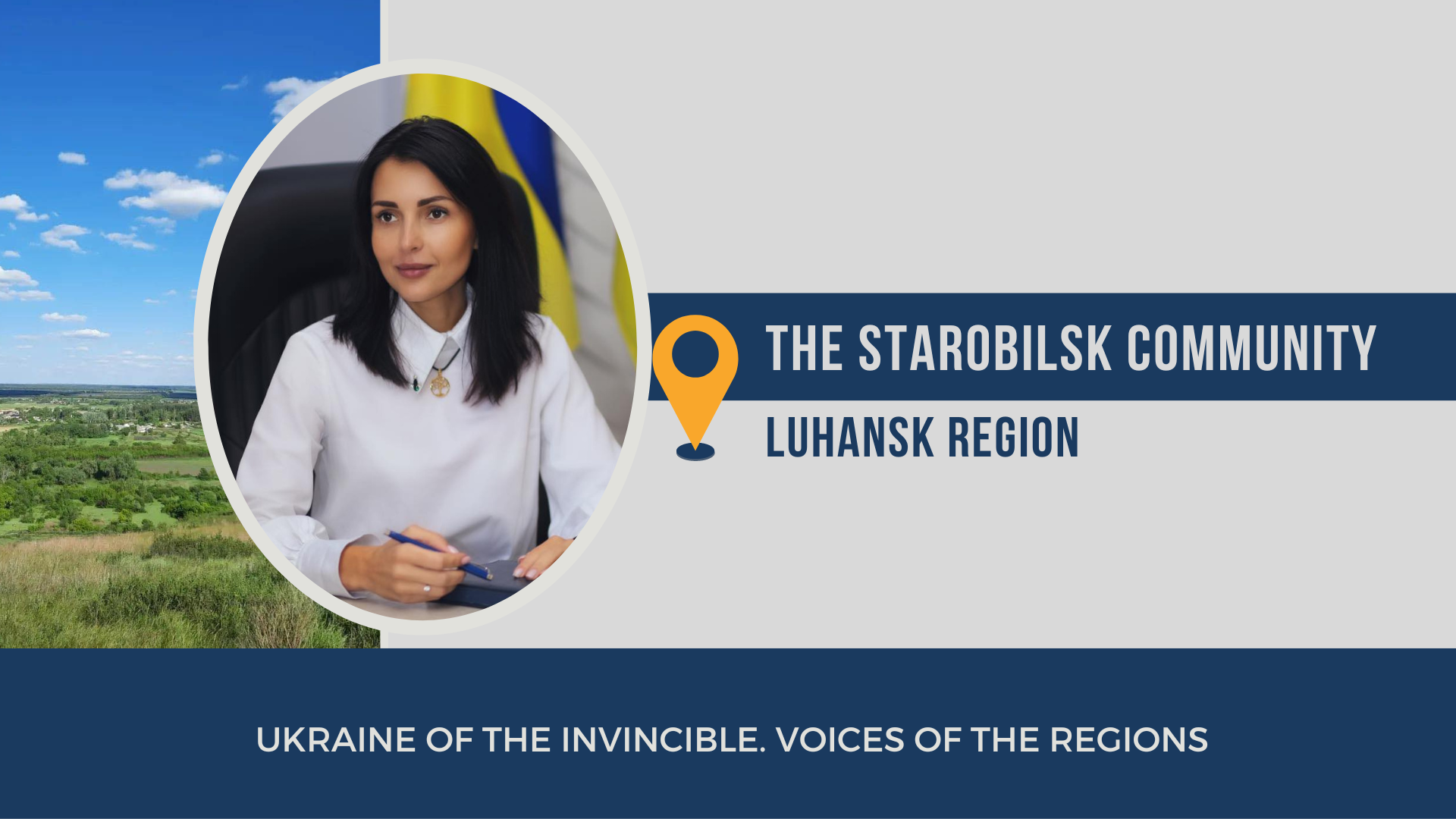 Back in 1686, Ukrainian Cossacks founded Sloboda Bilska in this place. It was later called the town of Starobilske, and during World War II it was the capital of Soviet Ukraine for several days.

Nowadays, Starobilsk is the center of the community of the same name, with a large area of ​​738 square kilometers in the Luhansk region. Until recently, Yana Litvinova was directly responsible for the sustainability of 25 settlements with a population of almost 30,000 people. As a result of the temporary occupation, she is deprived of the opportunity to manage the process on the ground. However, she seems to remain the leader of self-government.

She was elected Starobilsk mayor in October 2020. She was supposed to work in peacetime, to be a manager, to properly maintain the community infrastructure: communications, roads, driveways. Instead, she had to work in wartime.

An unarmed, physically defenseless woman, the mother of a teenage girl had to face completely different trials instead of the mundane peaceful challenges such as road potholes and stray animals. Those were enemy’s tanks, fires, destruction, shelling, armed and self-confident “camouflaged” men. However, her main traits have always been patriotism, dignity and professionalism.

“The enemy came to us during the first days of Russia’s full-scale invasion,” the mayor says. “We were among the first to fall under the occupation. And from the first days, people in the community were united in their civic position: Starobilsk is Ukraine. No one met the invaders with flowers.

However, February 24 launched the “after” countdown for each of us. Total and mass repression against absolutely everyone who had an active pro-Ukrainian position, with intimidation, the use of moral pressure and physical violence forced people to save their lives and the lives of their families. However, this will not make people change their inner conviction about the desire to live in a free, independent state. I strongly disagree with the statements that the east of the country was waiting for the arrival of the “Russian world”. Yes, there are those who ostentatiously rejoice and talk about improvements, try to form a general opinion about everyone, but you only have to visit local groups to understand the problems faced by people in the occupied territory, to understand quite clearly: there isn’t any improvement whatsoever.”

Many people from the Starobilsk community – experienced, talented, professional – have temporarily left their homes and jobs. The rest, unfortunately, are under temporary occupation, where Ukrainian laws do not apply, which means that the powers of our community, the town council, etc. are not recognized.

The temporary “new government” left people defenseless. They do not have basic information, are deprived of normal prices for goods, food, and services. It is very difficult to say how many of them are left without jobs, permanent income and means of living because there is no specific figure of how many people have left the community.

Internet connection in the community is unstable, some social networks and messengers are banned. There are collaborators in the community, and these people have already been charged with treason in absentia.

The occupation authorities are fighting against public activists. They are kidnapped, and “talked to”. There is no information about many of the abductees. People are intimidated by such actions. The community feels intense psychological pressure.

In a word, the occupiers do not take any steps to develop the town, the community and ensure people’s comfort.

Exorbitant prices on household goods, shortage of necessary medicines, decrease in the level of provision of all services, and sometimes complete absence of administrative services necessary for people, impossibility to withdraw cash in hryvnias without interest, which is artificially set by those who profit on it – all this is today’s Starobilsk. People live in fear there. Many people who worked in the public sector are afraid to leave their homes because of constant pressure and calls to talk to the “new authorities” in order to establish cooperation. This is far from a complete list of all the “improvements” the new leaders are silent about.

“Russian aggression deprived people of the usual peaceful benefits and joys, turned them into refugees and displaced persons, robbed thousands of their most precious possession – life. And we must remember this every day. Therefore, all the celebrations held in the occupied territories look especially cynical. People are dying nearby, the city met daily those who were left without everything, and at this time, “liberation” celebrations are taking place on the square… We found ourselves in a new terrible reality, in which no one knew how to behave, because we had never taught been to live and work under martial law,” Litvinova admits. “But I want to note that, despite the occupation, all cultural, educational, medical and other institutions of the community worked in March, April, May (of course, given the realities of war), and their staff received salaries from the Ukrainian government, from the community budget. Our hospital is working; doctors receive salaries from the National Health Service.”

She is proud of people’s resistance in the first days of the temporary occupation that showed the “liberators” that they were not welcome here, that Starobilsk is, was, and will be Ukraine.

“The people’s courage, their willingness to resist the occupiers was impressive. What were we supposed to be liberated from?! From the economy, roads, infrastructure? Depriving our children of their childhood?! I can’t imagine how much time it will take to wash away what the occupiers did to us, Ukrainians, their neighbors.”

People went to rallies, tried to stop the enemy’s military vehicles bare-handed, installed the Ukrainian flag instead of the enemy’s.

“In the first weeks of the temporary occupation, we continued working for the people, created points for collection and distribution of humanitarian aid, improved the work of communal services, in short, we tried to do everything to help people in a difficult situation,” the mayor says. “Despite their status, age, both adults and teenagers worked together to clear the rubble from the shelling of a residential quarter, restored the surviving but partially damaged buildings, arranged places for the temporary stay of residents of other cities and communities who fled to us from places where hostilities continued.”

The town council worked together with volunteers, people self-organized and demonstrated great humanity, the ability to empathize, and their civic position. This quiet daily heroism will never be forgotten.

The fact that people are already discussing the restoration of the community is a powerful incentive for Litvinova to live and make plans for the future of the town territorial community. Yana is happy that many people understand: they will have to work a lot, but nevertheless, they really want it.

“We can speak about such public mainstream on a national scale as well,” the mayor is confident. “Everyone who is waiting for the victory dreams of life in renovated, prosperous Ukraine. And, therefore, we must make efforts for this – together with leaders of various levels, together with our compatriots and countrymen. Otherwise, nothing will work. Everyone should put their own brick in the new building of our country, our community. The main thing is our victory in the war. Then there will be a community, funds, new plans, schools, stadiums – everything!”

After these words, you do believe that Litvinova is a great motivator.

“Ukrainians are very freedom-loving, committed to the defense of liberty and independence of their country,” she continues. “This struggle has been going on for hundreds of years. All the time we are forced to prove our right to exist. My acquaintance once said: it turns out that I love Ukraine so much, and I have the strength in me that I have never imagined before.”

Yana sincerely believes in the Armed Forces of Ukraine and that all the cities of our country will be de-occupied. Starobilsk residents are also waiting for the return of the Ukrainian army and for the punishment of the collaborators. Every time they repeat: Starobilsk is Ukraine, together we will win!

“War is with us all the time and reminds us of itself. But we continue to live, love, hope. Daily. It’s been almost five months in a row. And to believe. Believe in Ukraine, in the happy future of our children. There is no other way, we must be strong,” says Yana Litvinova, the mayor of Starobilsk, for whom choice and freedom are the greatest values. You don’t know what you’ve got until it’s gone.

Material is prepared within the project “Countering Disinformation in Southern and Eastern Ukraine” funded by the European Union.