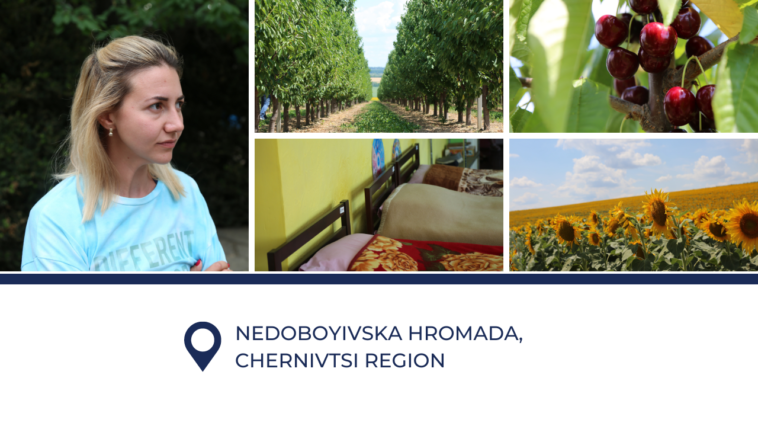 A round-the-clock emergency response center serving about 500 people a day – that was how the Nedoboyivska hromada (community) of Chernivtsi region responded to the full-scale war in the first days. In about 24 hours, the residents teamed up to arrange temporary housing and collect critical necessities for people fleeing the war. Over time, the activities became routine. Some of internally displaced people decided to stay in the hromada. The community needed housing facilities and programs to support the newcomers.

Here’s what life in the Nedoboyivska hromada was before the full-scale war, and here’s how the community copes with new challenges and finds ways to grow as the war rages.

Before the full-scale war

The Nedoboyivska rural hromada is located in the north west of Chernivtsi region. The hromada is not a manufacturing community, most of the revenue comes from fruit farming.

There are just a few hundred hectares of cropland in the hromada. Orchards cover the rest of the cultivated land. Peculiarities of the soil and land surface make perennial plants the best choice for the farmlands of the Nedoboyivska hromada. The community harvests crops almost year-round – apricots, plums, and cherries in summer, and apples in autumn. Apples are the hromada’s specialty cultivated by generations of farmers. 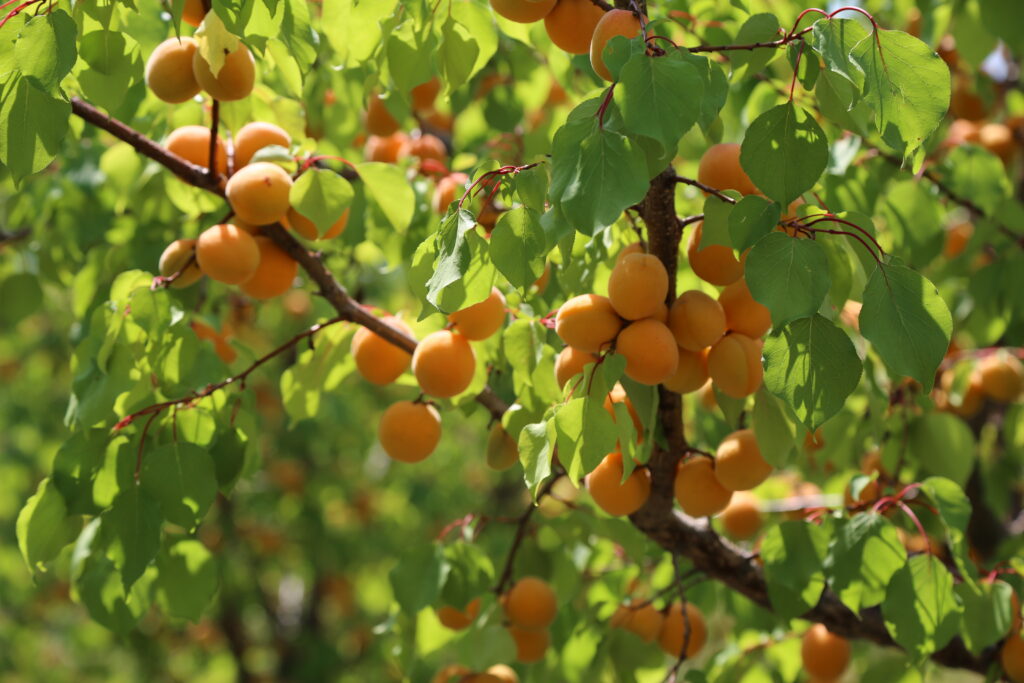 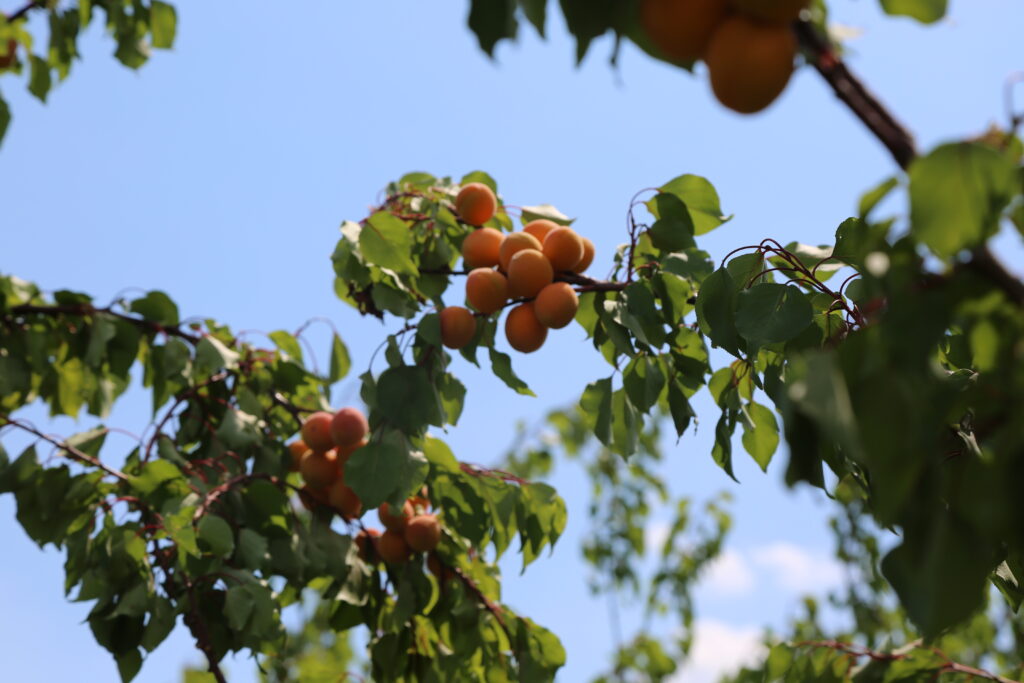 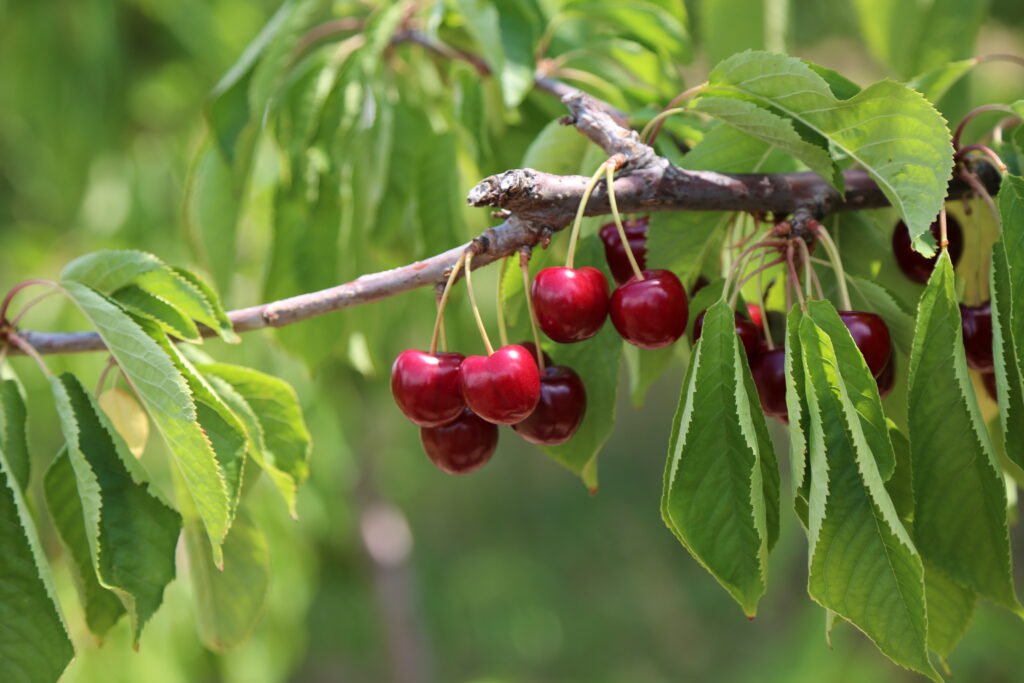 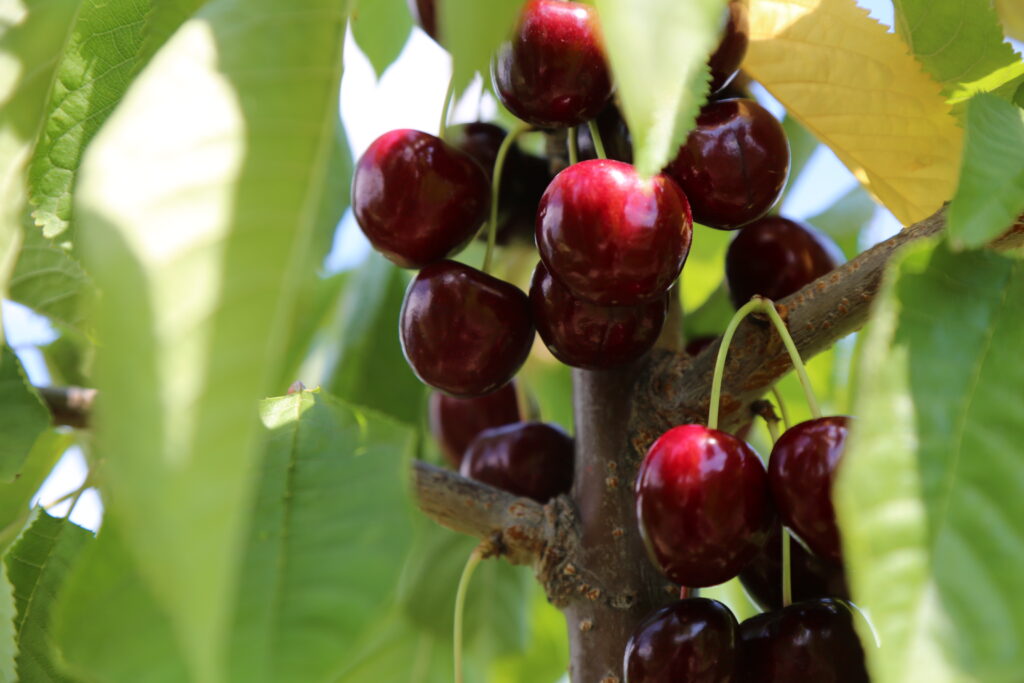 Apples are even part of the hromada’s coat of arms. A share of apples is the biggest among the orchards. Entrepreneurs of the community teamed up to boost their profits and created an agricultural hub. Apples are sorted by color and size, and prepared for sale in Ukraine and exports.

For Vasyl Maydanskyi, director general of the “Pan Sik” (“Pan Nedoba”) juice company, apple farming is his family business. Over time, he decided to make the brand recognizable, emphasize the tradition of quality manufacturing, and promote the hromada. Nedoba was the name of a village land owner centuries ago. The company experiments a lot and creates its own apple-based recipes. Some other ingredients are oranges and lemons. Taxes paid by “Pan Sik” are one of the biggest sources of revenue for the hromada. The juice is sold on-site, in the Nedoboyivska hromada. Its production and distribution was not scaled up nationally. 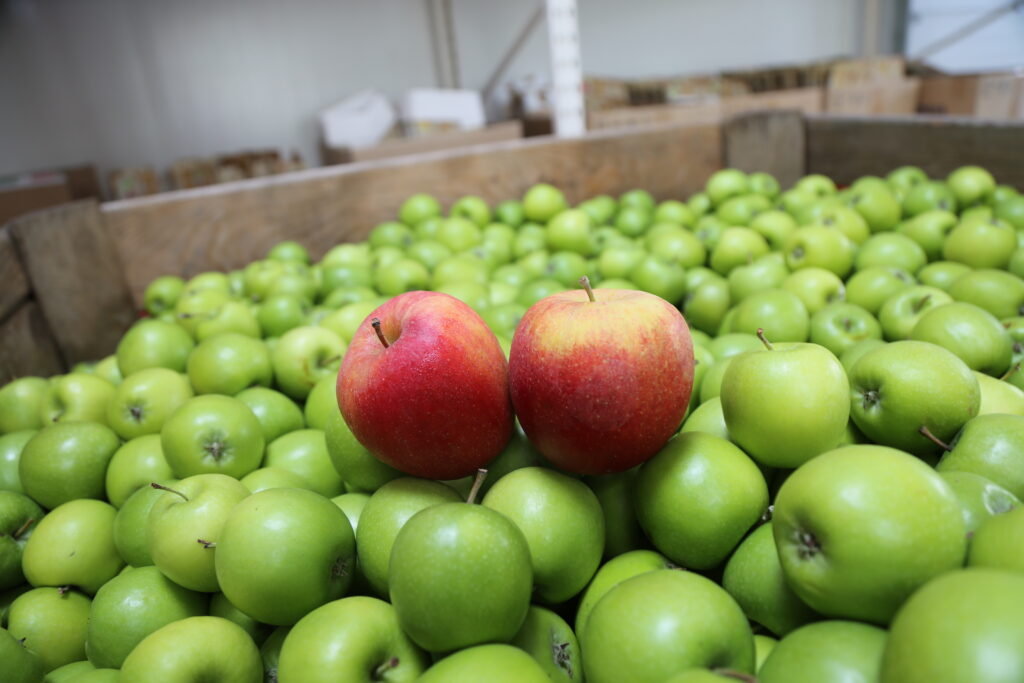 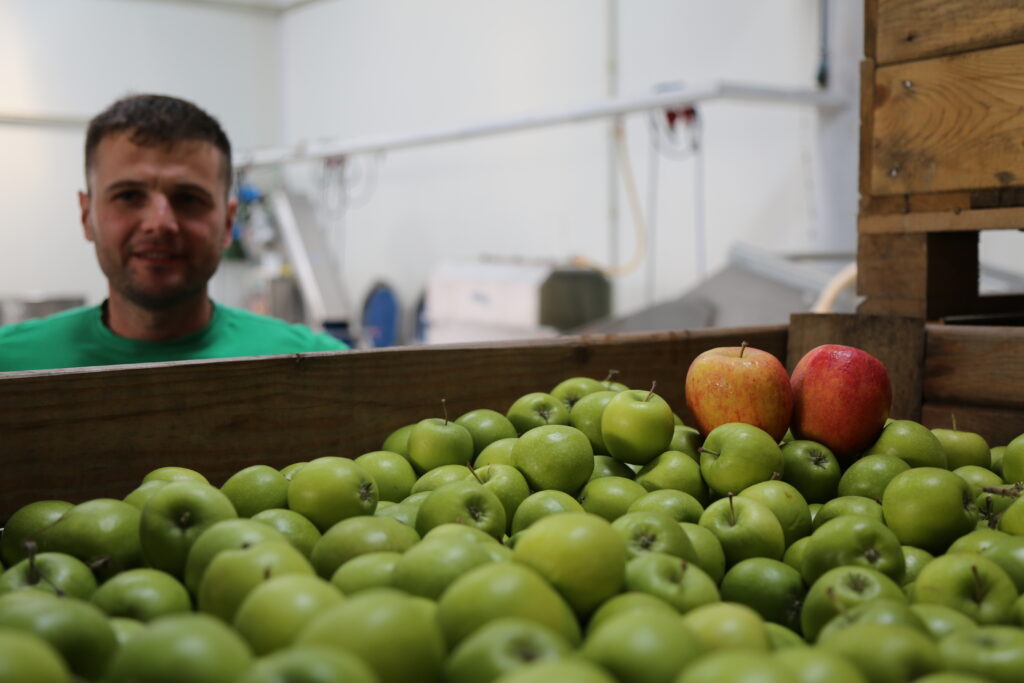 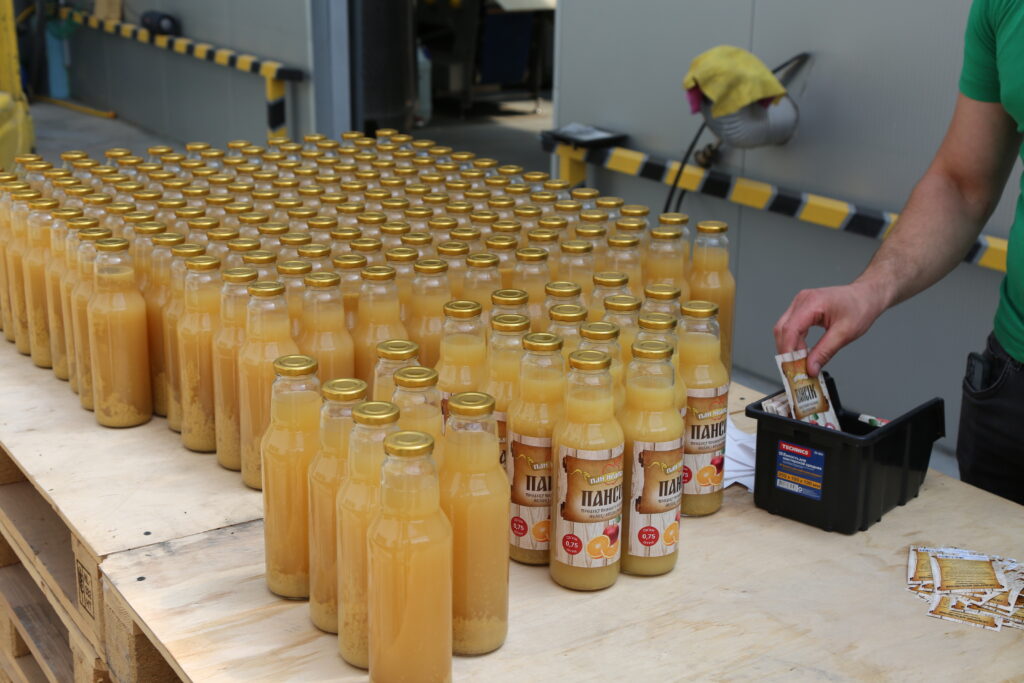 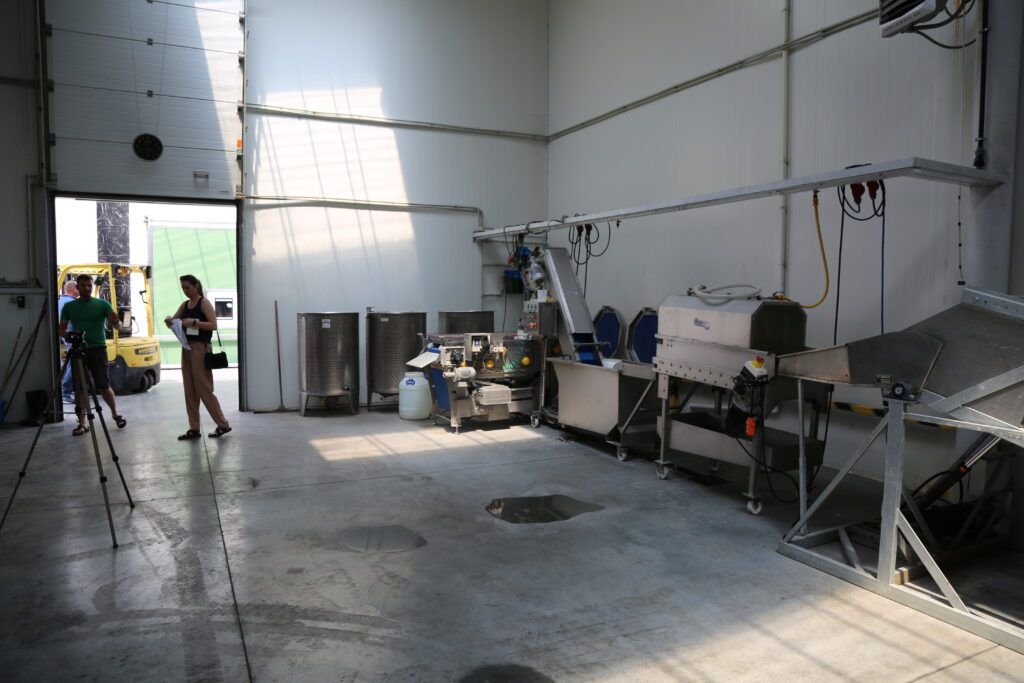 The community planned to establish a conglomerate of apple farming businesses and sustain its development, but then the full-scale war began.

It’s February 24, 2022. Russia begins a full-scale war against Ukraine. The Nedoboyivska hromada, like every other Ukrainian community, had to quickly respond to the new challenges. The village of Nedoboyivtsi is located close to the state border, and the local self-government anticipated that people will look for shelter here. A lot of people stayed overnight in the hromada or stopped for a few days to catch their breath and move on.

About 3.5 thousand people in total have passed through or stayed in the hromada. In the first days of war, the community hosted up to 400 people a day. A round-the-clock emergency response center that the hromada established, registered the refugees and provided housing for them at municipal sites or in private houses. The community residents immediately teamed up and brought critical necessities and food to the center.

“We responded collectively: the deputies, executive committee, and village council joined efforts with the residents. We arranged temporary housing for internally displaced people at municipal sites. We coordinated through the web site of the village council and social media, Viber and Telegram in particular. Teachers reached out to the students’ parents. In one day, a school was made ready to host 140 people. People brought in beds, matrasses, blankets, pillows, and hygiene items. We learned that we are great team players,” secretary of the village council Snizhana Todosiychuk said.

There were people who decided to stay in the Nedoboyivka hromada. Some of them have no home to return to. The community was facing a need of long-term housing facilities. The USAID DOBRE Program helped the Nedoboyivska hromada, its partner since 2020, to address the need through technical assistance. DOBRE Program provided about USD 150 thousand worth of beds, refurbishing, washing machines, refrigerators, kettles, tables and chairs. All people housed at the municipal facilities are provided with basic living conditions. 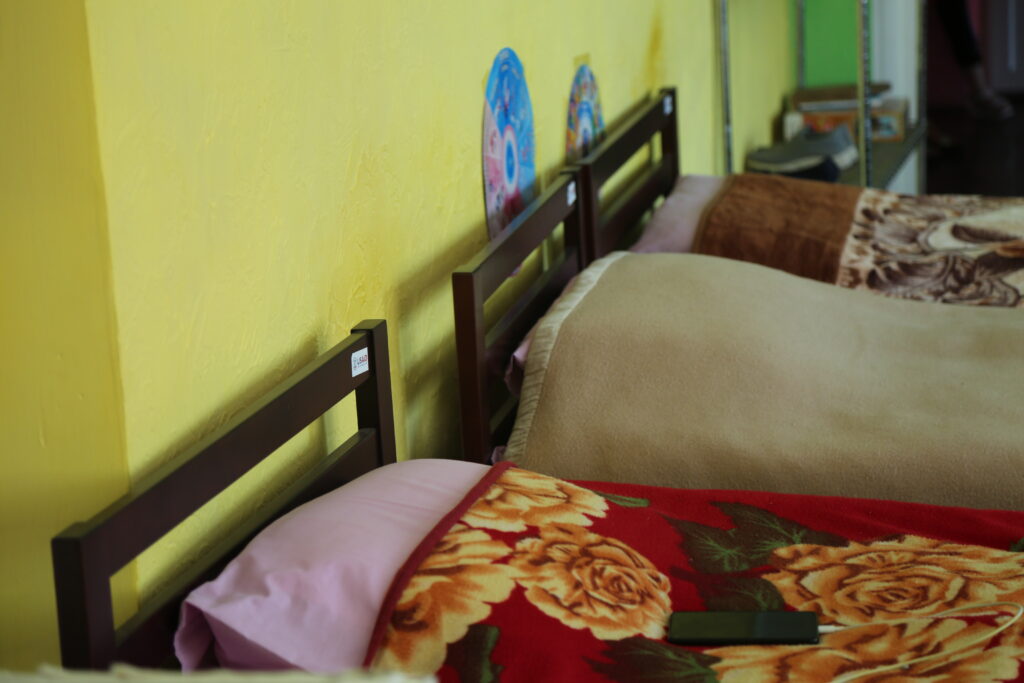 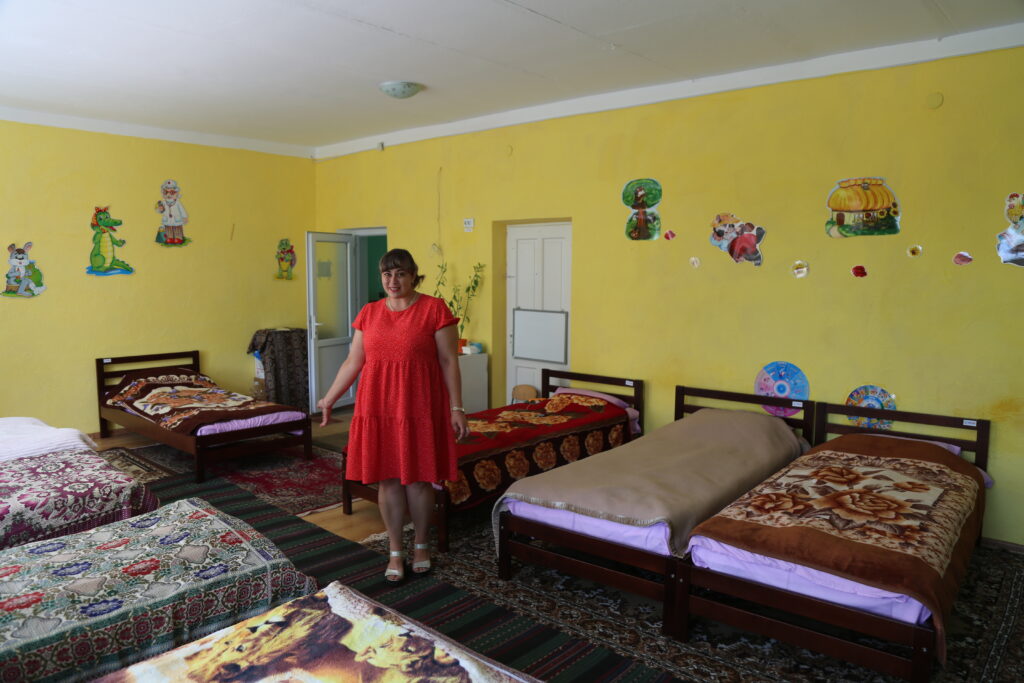 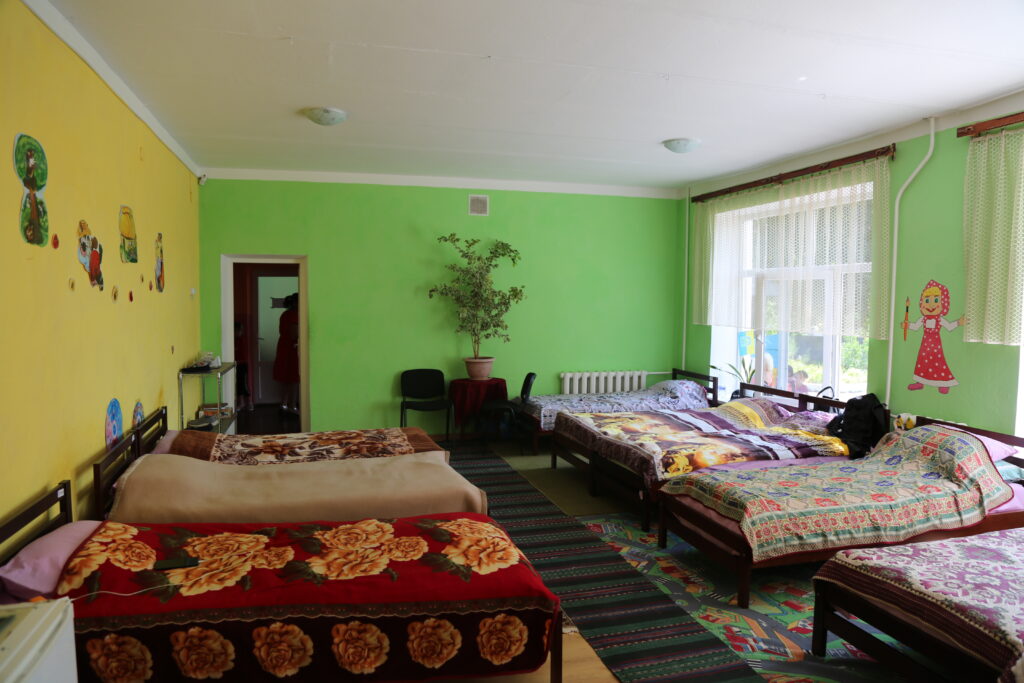 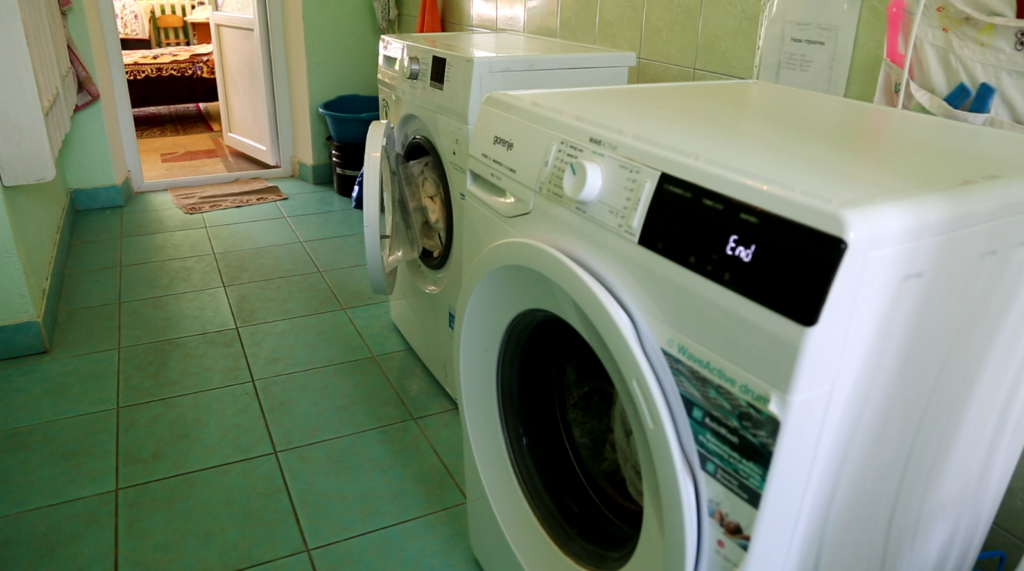 Joint projects that were implemented earlier, regained momentum. The session hall refurbished with the support of the USAID DOBRE Program, serves as a humanitarian relief center. The refugees eagerly spend time on the children’s playgrounds and at the outdoor sports facilities, Snizhana Todosiychuk said. The community runs a number of activities for local residents and internally displaced people, including charity tournaments. 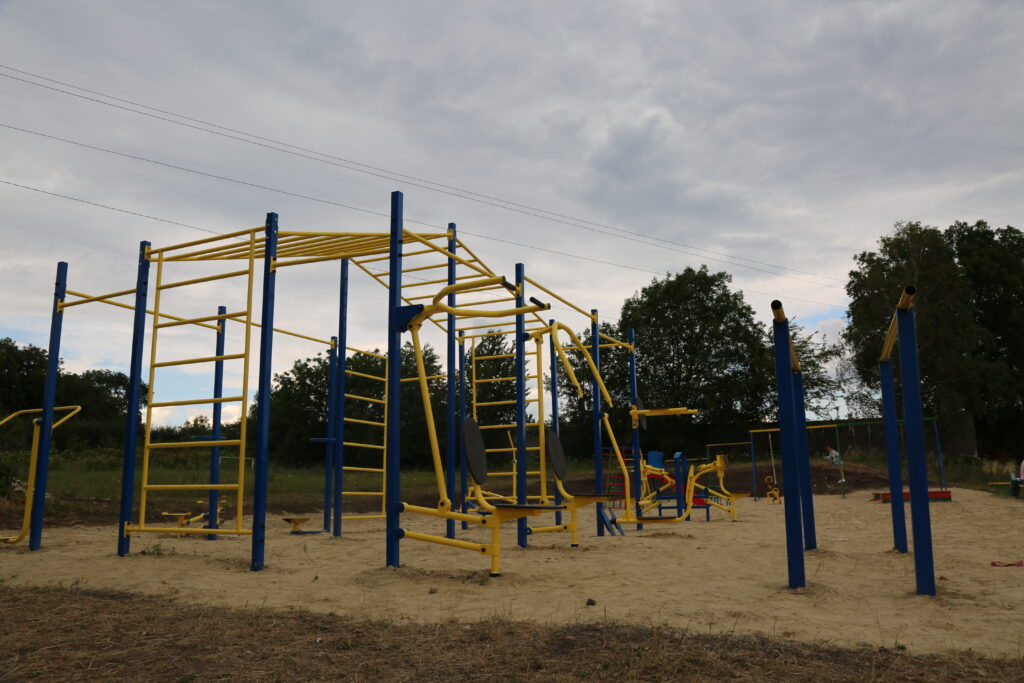 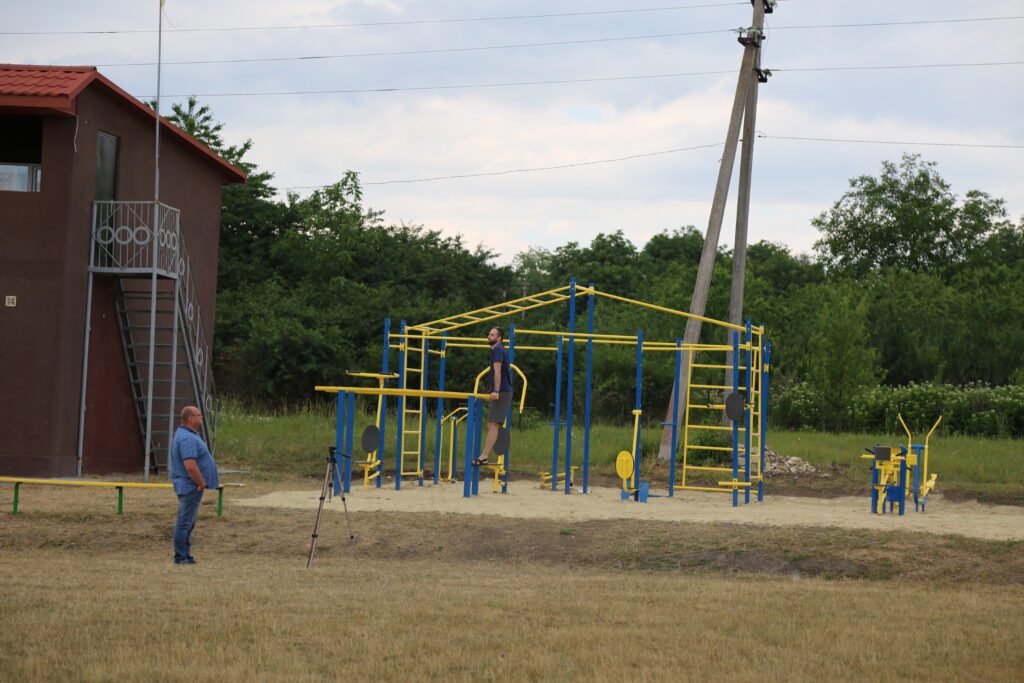 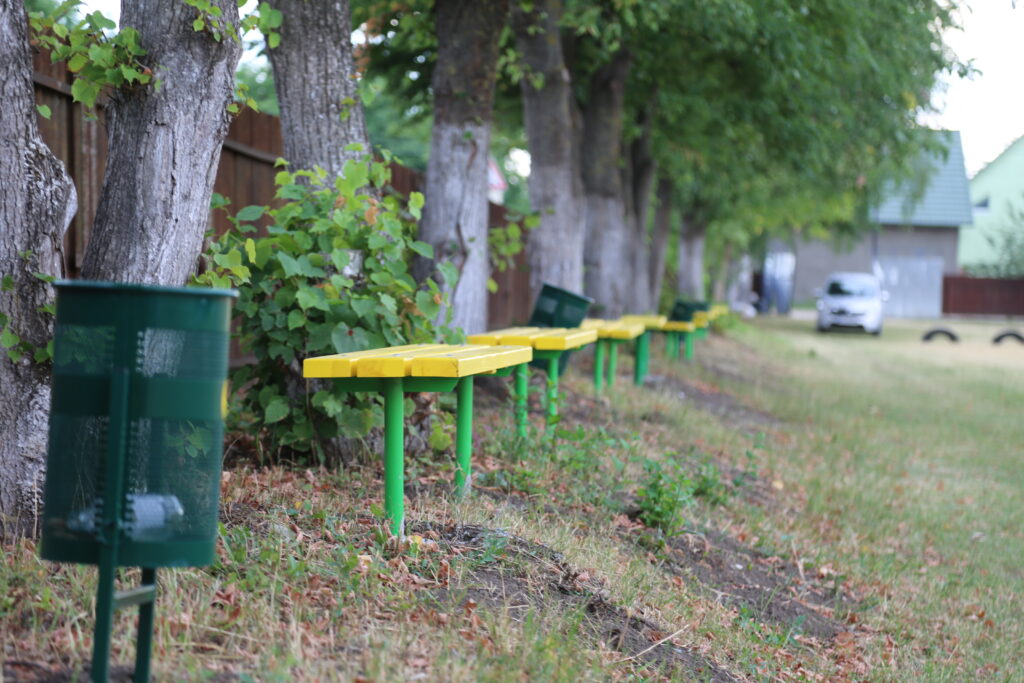 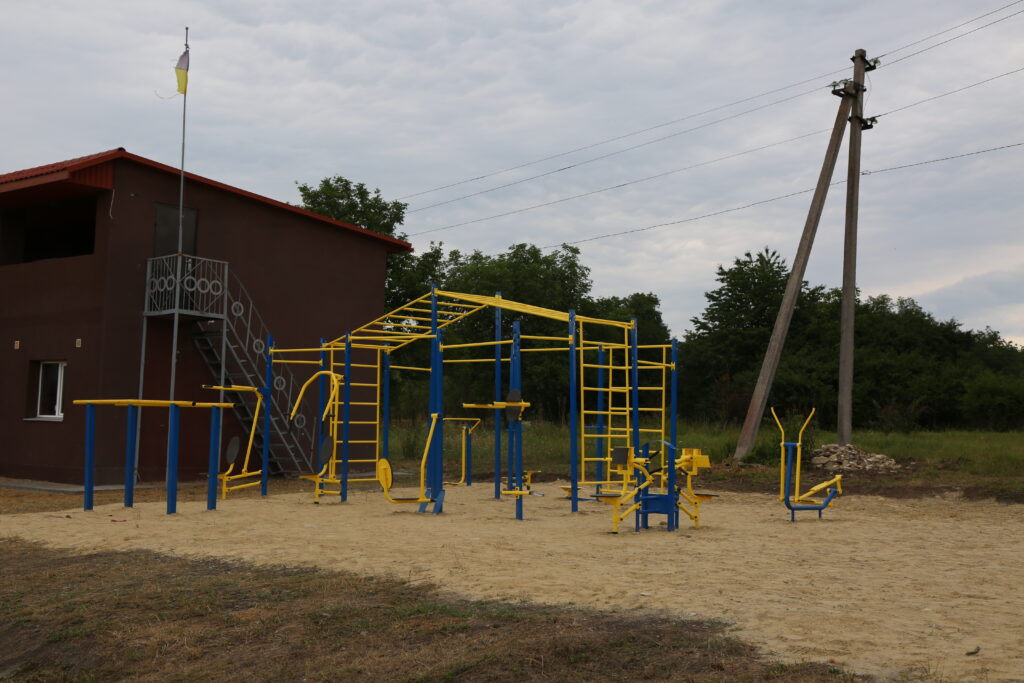 People rebuilding their lives in hromada

There are currently about 1,400 internally displaced people in the Nedoboyivska hromada. More than 100 of them have temporary housing at kindergartens or schools.

Natalia is a refugee from Donetsk region. She’s used to distant sounds of explosion, the woman says. When it got worse, she left with the children.

“The war rages at our home since 2014. I know what it is like to come under attacks. After February 24, when the [Russian] troops advanced toward Kyiv, the attacks became more frequent. One night, an explosion was so close that it felt like [the plaster] was falling off the walls. My son jumped off the window of our private house. We decided to leave. We took an evacuation train to Chernivtsi, and then travelled to the Nedoboyivska hromada. We found a warm welcome here. We were provided with housing. We have everything now. But we want to go back home. We made an attempt to go back – we stayed at home one day and returned here. It’s still too dangerous there. Some days there can be as many as five incoming attacks,” Natalia said.

The family is learning to live again. Natalia says they are impressed by the beauty of the place and the kindness of people. Her family joined the residents of the hromada as they were harvesting crops. Natalia’s teenage children were so excited. They also earned their first money.

There’s a family of refugees from Mariupol whose lives were shattered by war. They’ve come a long way to get to Nedoboyivtsi. Valentyna and her little daughter came to the hromada shortly after the full-scale war. At first Valentyna’s mother, brother and other family members did not want to leave Mariupol. They grew accustomed to the sounds of explosion since 2014. They hoped that the city would withstand it. But it didn’t. There was no connection as they fled the besieged city struggling with lack of food and cold. As she followed the news, Valentyna did not know if her family were alive. She could only guess what they were living through in a once vivid city. They made several attempts to flee, before they succeeded. The city was encircled and hostile checkpoints set up. They were checked at each post. They did not know if they would pass through. The eyes of Hanna, Valentyna’s mother, wet as she remembers what they went through. It took her more than a month to reach her daughter and granddaughter, a long and difficult way.

All family members have fled to safety. Valentyna stays in Nedoboyivtsi with her mother and daughter. Other family members went abroad. Mariupol is occupied by the Russian forces. There is no building in the city left intact. In Nedoboyivtsi, the family learns to carry on and waits for the victory. The hromada met them as old acquaintances whom they haven’t seen for a while, Valentyna said. They stay in a private house. Valentyna is looking for remote work to be able to take care of the daughter.

“We hope to be able to come to Ukrainian Mariupol one day, to see it. But that will be a different city. I will not be able to show my daughter the places where I grew up and met her father. Someone we know helped us get here. That is probably the best place where we could be. It has cool people and beautiful sites. That’s a super place for a child. What’s best here is people. They say hello, ask questions, try to support and help us. It is extraordinary and touching. Local self-government gives us a lot of support. They call or text us to make sure we have everything we need,” Valentyna said.

People dream of coming back home, to their villages and cities retaken by Ukraine. As long as that is not possible, they try to rebuild their lives in new communities. Local self-government tries to address the new challenges and help the people affected by war.

How hromada copes with new challenges

Almost all businesses switched to a single two per cent tax rate. The excise tax on fuel was slashed to zero. As the center for administrative services did not operate fully in the first weeks, fees for the services did not contribute to the revenue. Still, the hromada found a way to compensate the lost revenue, particularly through the property and land taxes, head of the financial office of the Nedoboyivtsi village council Natalia Myronets said. The hromada finds the money to support internally displaced people through local programs. The community restructured unspent budget items – some UAH 770 thousand (approx. USD 21 thousand), to give three meals a day and food packs to refugees staying at municipal shelters. The hromada encourages civil society organizations and charities to help the refugees that stay in private houses.

Thanks to the partners’ support, the community fulfils its strategic priorities. In the early days of cooperation with the USAID DOBRE Program, the Nedoboyivska hromada researched the community needs and projected key development areas. One of the most acute problems was solid waste management, the community found.

“That is not just a problem of our community. Historically, only cities and towns had waste management programs. The villages didn’t. It’s hard to change it as not so many villages can afford to buy waste collection vehicles or waste carts. Thanks to our cooperation with DOBRE Program, we can do that. We began to set up the process, a complicated but useful thing to do,” head of the hromada Yuriy Yuzva said.

The hromada installed 10 sites for separate waste collection, and bought a waste collection vehicle through DOBRE Program. The new system will serve municipal sites joined by private houses at a later stage.

The hromada takes the waste to a temporary landfill. It is negotiating a joint landfill with the neighboring Khotynska hromada.

The Nedoboyivska hromada of Chernivtsi region supports internally displaced people, local residents, and the Ukrainian Armed Forces. The community is determined to cope with new challenges through collective efforts and continue to develop in the peace time.