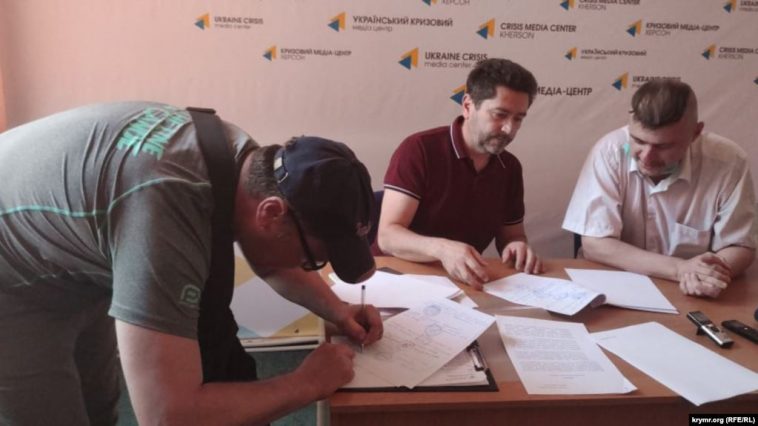 On June 9, 2020 at Crisis Media Center. Kherson, NGO representatives spoke about their complete disagreement with the announced plans to start supplying the Dnipro water to the occupied Crimea.

Volodymyr Molchanov, Head of the Kherson Region Transport Organization, and Ibrahim Suleymanov, Head of the Kherson City Mejlis of the Crimean Tatar People, presented an Open Appeal to the President of Ukraine, the Speaker of the Verkhovna Rada and the Prime Minister with a protest against the restoration of water supply to the occupied Crimea and even against official discussions on this topic.

NGO representatives call on the country’s leaders to immediately make official statements and put an end to all insinuations about the North Crimean Canal supplying water to the occupied Crimea. They believe that supplying water to Crimea will only increase the occupiers’ colonization of the peninsula, and therefore should be considered under Article 111 of the Criminal Code of Ukraine as “treason, i.e. an act intentionally committed by a citizen of Ukraine to the detriment of sovereignty, territorial integrity and immunity, defense and economic security of Ukraine.”

In their Appeal, public activists demand the adoption of a law stipulating that public calls to restore the supply of electricity and water to the occupied territory of the Autonomous Republic of Crimea, until the territorial integrity of Ukraine is restored, will be considered a criminal offense.

For the video broadcast of the event see here.

For the text of the appeal adopted at the event see here.