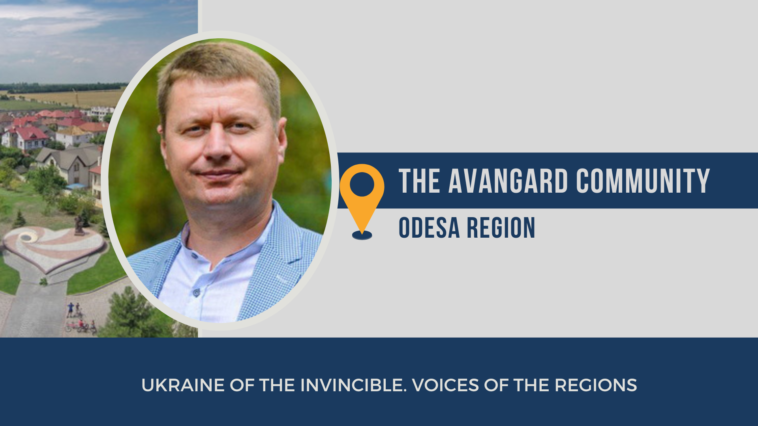 The Avangard territorial community fully corresponds to its name. In 2017, it was among the first to appear as a result of decentralization of power in the region. The first to join was the Prylymanska village council, and then the village of Nova Dolyna. Now this area of ​​73 square kilometers is a powerful self-governing unit bordering the western part of Odesa. We asked the village head Serhiy Khrustovskyi to tell us in what else it is ahead of many others.

He dreams of the day when the Russian Federation will sign its capitulation. He promises to put on a white shirt embroidered by his mother, summon an organizing committee of the staff of the village council and cultural institutions, and give orders to arrange a big holiday in the community. Then there will be loud and carefree children’s laughter in the Avangard community.

However, now there is a war, and it cannot be heard. “The undeclared, but no less bloody war takes the lives of our compatriots every day,” Serhiy says sadly. “The best sons and daughters of Ukraine die defending our home land from the Russian invaders, and we wish they hadn’t died so young. On May 27, our brave countryman Denys Slabenko died during a combat mission in the Kherson region. When the full-scale war began, he was among the first in our community who went to defend the country from the aggressor. The soldier was buried on June 4 at the village cemetery in Avangard. Two minor children were left without a father. On June 21, our resident and soldier Oleksiy Zvonarev was laid to rest in the village of Khlibodarske. Oleksiy Leonidovych stood up to defend our country back in 2014, participated in the anti-terrorist operation. He did not hesitate to go to defend Ukraine when a full-scale invasion began.”

These days, every conscious Ukrainian contributes to the victory: some fight and defend the country, others keep the economy afloat, and still others are in the ranks of the IT army and communicate the truth about the war to the whole world. And almost everyone helps the army financially and materially as much as they can.

At the same time, Ukrainians have become a nation of volunteers who help soldiers and displaced persons and support each other. The patriotic residents of the Avangard territorial community joined the volunteer movement from the first days of the all-out war.

Among those who care and do everything possible and impossible to bring our victory closer, the head mentions the Osypenko family from Avangard:

“In our conversation, Svitlana admits that at first she, like most Ukrainians, was in a kind of stupor and tried to collect her thoughts, because it is hard to accept the fact that in your country a full-scale war has started, sirens are sounding, civilians are killed by explosions and atrocities of the enemy, whole cities and villages are on fire. Moreover, Svitlana is a mother of many children, so, of course, she primarily worried about her children. But then she understood that something had to be done, because even in the rear you can bring victory closer and help our defenders. Svitlana’s husband Oleksandr, together with his sons and other young people from Avangard, started making Molotov cocktails in order to “welcome” the enemy if necessary.”

The community has formed a food reserve, which is constantly renewed and replenished. They have established cooperation with a number of public organizations and charitable foundations. A number of programs have been adopted to support the residents and funding is provided from the local budget. During June 2022 alone, 1,690 food kits for IDPs were distributed in the community, namely:

• 300 food and vegetable kits from the House of Glory church;

• 750 food boxes with fresh vegetables and fruits from the Fresh Market agricultural cooperative from Odesa (300 of which are supplemented with egg trays);

• 180 food kits were formed from products purchased by the village council and distributed to residents;

• 60 food kits, as well as 322 sanitary and hygiene kits (50 children’s and 272 adults) from Dopomoha Charity Fund and Vostok-SOS Charity Fund.

“We also support other communities,” Khrustovskyi continues. “Recently, the Avangard village council approved a corresponding program aimed at restoring the infrastructure, in particular the lighting and sewage systems, in the Nemishaieve territorial community (Bucha district), which had suffered from the armed aggression of the russian federation. According to this program we allocated UAH 500,000 and purchased materials and equipment (lamps, hatch covers, etc.), which in accordance with the current legislation were transferred to the Nemishaieve village council. Thus we contribute to the return of its residents to normal life.”

Despite the war, the Avangard territorial community continues to develop, implement scheduled projects and establish cooperation with other communities. In May, a delegation from the Avangard community visited the German town of Bad Wörishofen, Bavaria, to initiate cooperation between municipalities for the implementation of joint development projects. Concerned about the situation in Ukraine, residents of Bad Wörishofen initiated collection of humanitarian aid, which was handed over to people affected by Russian aggression.

Also, in May, a tripartite cooperation agreement was concluded between the Avangard village council, the KNP “Avangardivska AZPSM” and the private enterprise “Medical center ‘INTERNATIONAL-MEDICAL’.” The agreement envisages provision of humanitarian aid to the Avangardivska AZPSM: medicines, medical supplies and equipment. Besides, in the event of hostilities on the territory of the community, the parties can organize additional places for the provision of first aid or operations on the basis of the PE “Medical Center ‘INTERNATIONAL -MEDICAL’”. And in the future, after the medical center is opened, a system of discounts on the agreed list of services will be established for the Avangard community residents.

A private medical center is constructed in the village of Nova Dolyna at the initiative of the president of the “International Horizons” charitable foundation for development and aid, Doctor of Medical Sciences, Professor Alireza Pakhlevanzade, who is also the head of the International Educational and Scientific University, the “Odesa International Academy” PO, the “World rehabilitation center” GO, “Student Dental Clinic” Medical center, PE “Amazon”.

The scale of the project is really impressive. Professional experienced narrow-profile doctors, including therapist, surgeon, neuropathologist, cardiologist, pediatrician, ophthalmologist, dentist, obstetrician-gynecologist, allergist and others will see patients in spacious modern offices of the medical center, fitted with the most modern equipment.

The Avangard TsNAP also adapted to work in wartime conditions. It continues to do what it is good at: providing high-quality administrative services to the community residents, including IDPs. It accepts 40-50 applications from internally displaced persons every day. The Center handles each application and provides assistance on various issues.

For the purpose of support and social adaptation of internally displaced persons who had arrived on the territory of the community since 2014, in 2021, four apartments were received in the communal ownership for temporary use by IDPs. The apartments were purchased at the expense of the local budget funds and subvention funds from the state budget to local budgets for the implementation of measures to support territories affected by the armed conflict in the east of Ukraine, in accordance with the procedure determined by the Resolution of the Cabinet of Ministers of Ukraine dated October 4, 2017 No. 769. Today, IDPs live in these apartments, in particular, a family that moved to the Avangard community from Mariupol after February 24, 2022.

According to the village head, the model of territory management chosen during the war is fully justified:

“The system of wartime government, which was formed in Ukraine during the four months of the war, is quite successful. Local government is the same constitutional structure as the state government. It is closest to the citizens and the voter sees the results of its work first of all. Local self-government not only does not hinder the military, but also holds out against the invaders with its own forces. Local self-government bodies of all levels cooperate with the military command and military administrations.”

By the way, this relationship developed long before the Russian invasion in February. At the beginning of 2021, cooperation between the village council and military units stationed on the territory of the Avangard village council began to be established. Last year in February, a program of support for military units was adopted. It was aimed at improving their material and technical base, creating conditions for satisfying, in particular, their everyday needs. Besides, plans on holding joint events and national-patriotic education of children and youth of the community were also developed.

It is impossible to foresee everything. Khrustovskyi says:

“If we had known there would be an armed aggression that would threaten the lives and health of civilians, then first of all, we would have focused on the formation of a fund of civil protective structures, both bomb shelters and anti-radiation shelters. As a matter of fact, today this is one of the main tasks. We are pursuing this goal in cooperation with the State Emergency Service. Basements are cleared of debris, inspected and will be properly equipped.”

Serhiy is confident that having held out since 2014, we will win now as well. For more than four months, Ukrainian defenders have courageously and selflessly defended the country, and the entire Ukrainian people have shown indomitability in the war unleashed by russia. The enemy predicted to capture all of Ukraine in a few days or weeks. However, those plans did not come true.

The head of the Avangard community is proud of how Ukrainian military demonstrate to the whole world their capability of beating an aggressor despite his superiority in weapons and manpower:

“And we will not retreat, because this is our land, our Motherland, our children live here.”