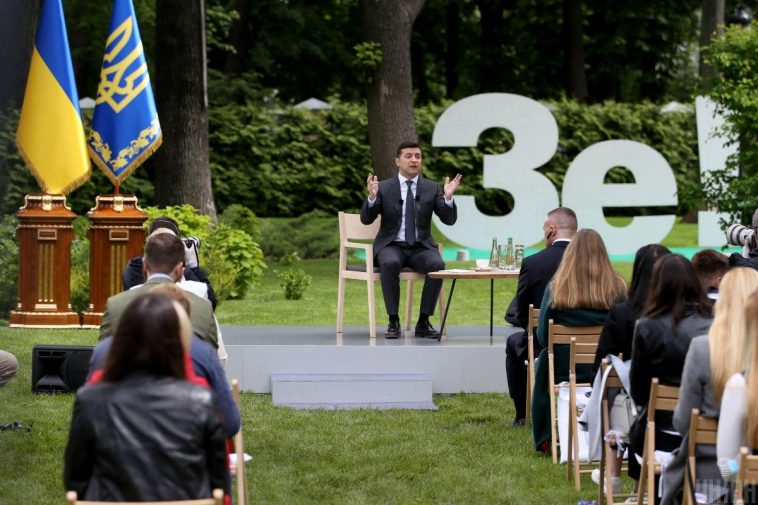 Precisely one year after he took the oath of office, President Zelenskyi held a press conference. Unlike for his first meeting with media last autumn, his administration in Bankova put aside the idea of record long marathons, opting for a traditional outdoor format. Journalists asked Zelenskyi about domestic affairs, ties to oligarchs, relations inside the administration and much more. UCMC picked the highlights, read on.

Experts and voters: two perspectives on the President’s first year in office

On the one hand, after one year in office Volodymyr Zelenskyi still enjoys the trust of 57 per cent of citizens, according to an opinion poll held by the sociological group “Rating” on May 12-13, 2020.

On the other hand, interviews of experts and journalists reveal less positive findings. Thus, regional journalists and experts surveyed by the Ilko Kucheriv Democratic Initiatives Foundation on May 8-15, 2020 gave relatively low marks to Zelenskyi’s tenure as President. The average mark for his job performance is only 3.1 out of the 10 possible. Their opinion is in sharp contrast with that of the voters.

Interviewed experts said President’s interaction with the Parliament was most efficient, while giving him the lowest marks for staffing – 2.1 out of the 10 possible points.

Experts say, the President’s main achievements during his first year in office are the land market law, liberation of prisoners of war and preserved authority. Besides, nearly all respondents approve of the President’s decision to support the banking law.

On Donbas, Russia and its proxies

At the press conference on May 20, Zelenskyi also got to speak about Donbas. “As for ‘just stop shooting’, it is a complicated process. I have never called on our army not to return militants’ fire. I wanted to demonstrate to the whole world – and that’s what we’re doing now, that while we have a robust army, we don’t provoke, we fight for our country. If we are fired upon, we will respond, but we will not be the ones to start shooting.”

“If the opposite side just stopped firing, in accordance with the Minsk agreements and our agreements made in the Normandy (format), everything would end. But they don’t know what will happen to them then.”

“They can only be influenced by the Russian Federation.”

President added about the Russian troops in Donbas: “They are not all same there, there are Russians, Ukrainians who took the second passport because they cannot live in those conditions, but there are also militants. We see that Russian infantry is there. We know exactly why they are shooting. Russian troops are there, so are Russian citizens. We understand where the orders come from.”

After Zelenskyi took office, he was often accused of depending on oligarch Ihor Kolomoyskyi. Over the time, especially after the banking law was passed, it became clear that the President knows how not to fall under the influence of oligarchs. He seems to be trying to stay equally distant from various industrial and oligarchic groups.

“I build relationships with people by doing what I can and want to. As long as I build my relationships the way I want, I stay independent from financial groups and oligarchs.”

“I am not a lobbyist of their interests. They cannot put pressure on me so that I make an appointment they want. I think they even don’t want to or they are afraid, because they understand that it makes no sense offering it to me.”

“I probably don’t compromise on very important issues only: say, Donbas – invest your money in the territories that are not occupied now. I talk to them, and they are ready to invest their money. I am ready to talk to businesses and oligarchs – let’s build hospitals. What can I do for them in exchange for it? Only equal rules. I want them to live and work by law.”

On disputable appointments and shortage of staff

President Zelenskyi has been often criticized for his appointments and staffing. He has reshuffled two cabinets, many of his appointments are questionable. Like his chief of staff and trusted aide, Andriy Yermak who found himself at the center of a scandal. Journalists asked the President about the principles that guide his staffing choices.

“Mr. Yermak is not my crony, Mr. Yermak is my trusted person, I trust him and he is the Head of the Office of the President.”

Besides, Zelenskyi recognized that shortage of staff is a real problem. “We are short of staff in the country. I cannot find a good Minister of Culture. We addressed the cultural community, asked many people saying: give us (the candidate). It is hard for us to find the Minister of Education and the Minister of Energy. Whoever we pick, next day the media write: they are a person of Akhmetov, or Kolomoyskyi, or Pinchuk.”

On Sheremet’s murder and Minister Avakov

During Zelenskyi’s presidency several volunteers and medics were arrested and charged in the notorious murder of journalist Pavlo Sheremet. Zelenskyi attended the press briefing organized by Interior Minister Avakov. At the same time, the version of the prosecution is not solid, and the general public is incredulous that the arrested persons are actually guilty. Evidence collected so far is insufficient.

“I was invited (to a press conference) and I came, because I want to be invited to all events that concern cases of high interest, including Maidan, Handzyuk, and Sheremet. Interior Minister Arsen Avakov is now leading Pavlo Sheremet’s case. He is the responsible one, and he knows it.”

“If the prosecution, and then the court, proves that the arrested individuals – for now they are possible murderers, are actual murderers, they will go to jail. If not, responsible will be held the persons who took the case to court and charged the innocent.”

On construction of roads and bridges

Ukraine’s roads are far from the satisfactory condition. At the press-conference Zelenskyi said road and bridge construction is one of the priorities of his presidency. “I would like to be the President that will be remembered for the roads in Ukraine that appeared during his presidency. I want it very much, as I plan to live in Ukraine after my tenure of office, and I want to travel along the roads, and I want people to see it, and feel no shame.”

“Our task is to construct all state roads that will unite our country and become a shopwindow. These are 25 thousand priority roads. I am sure that we will have finished all state road construction by the end of my tenure of office that will last as long as the people of Ukraine will decide it should.”

“There is a planned large-scale program, I am looking for USD three billion to finance it. These are all bridges of our country.”

During his election campaign last year Zelenskyi emphasized that he aims for one term only and will not campaign for the second term. Journalists asked him if he changed his intentions.

“I will think about it,” Zelenskyi replied. “Honestly? One term will not be enough. I am in for one term, as I said. I see that the work is complicated, no one will say “thank you”, but if there is massive support by the people of Ukraine, I will be able to consider it. (…) I will give it a thought, I am able to think it over.”

“In this case, I am sure of people’s approval.”