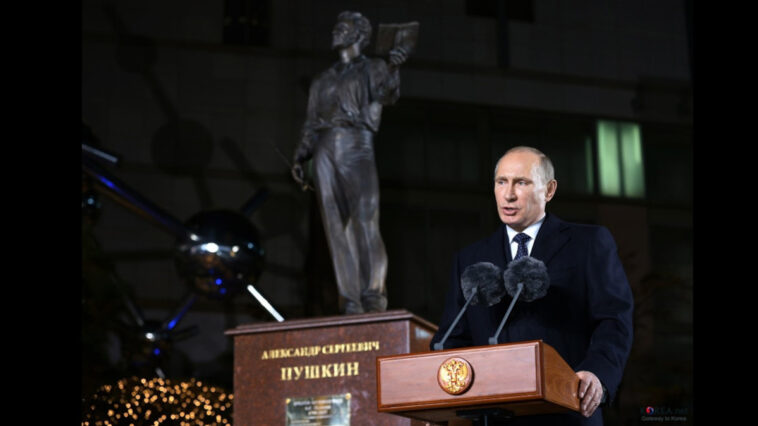 Vladimir Putin at the official unveiling ceremony for the statue of Russian poet Alexander Pushkin in Seoul. Image by Republic of Korea

The culture of ‘Muscovite Rus’ came to form from two heterogeneous sources. The seed of the religious and artistic culture reached Muscovy from southeastern Europe (Byzantium, the Balkans) through Kyiv. On the other hand, the foundation of the political and legal culture came to Muscovy from ‘Ulus Jöchi’, better known as the Golden Horde. As a result, the Russian “spiritual culture” took the shape of a familiar European facade, behind which a non-European state infrastructure hid.

Since Russian culture still existed as one whole, however internally conflicted, the influence of the imperial political culture could not but poison the Russian “Spiritual Culture”. Hence the sincere glorification of the empire by Alexander Pushkin and Fyodor Tyutchev, the extreme anti-Polonism of Fyodor Dostoevsky, the gung-ho patriotism of the early Nikolai Berdyaev.

For those who were either fearful or disturbed by such an imperialist outcome, the Russian “spiritual culture” offered a whole range of personal and political alibis. “Why me? I am a small person. The state is doing something evil, but I have nothing to do with it. I am even trying to hide away from it. Why blame me?”

Examples of this type of alibi can be found in “The Cathedral Folk” (Soboryane) by Nikolai Leskov or in many of Anton Chekhov’s characters and others. Hundreds, if not thousands, of decent “Russian intellectuals” are still hiding behind this alibi.

Finally, the Russian culture presents a third, exceptionally rare, type: openly anti-imperialist and opposed to the idea of a personal alibi. One can find this last type in the early Mikhail Bakhtin (“non-alibi in being”), the first type in Pyotr Chaadayev and Mikhail Salykov-Shchedrin, the second one in the late Berdyaev and others.

From this overview of the Russian political and spiritual culture, it follows that calls from Russian and some European figures to “save the Russian culture from sanctions” because, as they say, “it has nothing to do with Putin” contains some truth along with a good deal of hypocrisy.

The anti-imperialist type of Russian culture requires nothing but support. The only thing its supporters need to acknowledge is that Imperium Russicum delendum est, that is, “the Russian Empire must be destroyed” and this historical task has not been accomplished yet.

For those who hide behind their “personal alibi”, one can only wish that in the process of disintegration of the empire, they may find the formation of a state they would accept as their own, along with the personal responsibility for all of its actions.

Today, they are a ‘dead weight’ worthy only of pity. Furthermore, they are passive accomplices in the actions of their empire because they do not oppose the evil that is committed by and within it.

And those who have deliberately sided with the empire share the full responsibility for all of its crimes.

If you want to quickly find out what type you are dealing with when speaking to a single individual, ask them the classic “Where does Crimea belong?”. One will answer “Russia”, another “Ukraine”, the other one will say “Don’t ask me, I am just a small person”.

What we should not allow right now is for Russian imperialist culture to be treated as one that requires support, regardless of any action of the Russian state.

Today, we can, of course, listen to Wagner without pointing at his antisemitism and how his music inspired the Nazis. We can watch Leni Riefenstahl’s films and admire her cinematic skills. Similarly, the imperialist result of the Russian culture, with its highest manifestations, will become part of the cultural world heritage when the empire that gave birth to it will follow the same fate as the Third Reich.

But right now, we need to work for this to happen.