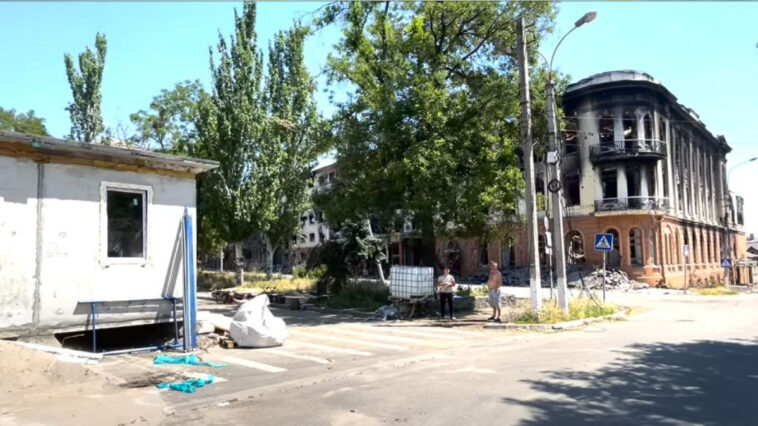 On June 23, a large delegation of the Moscow Patriarchate arrived in occupied Mariupol with an inspection. Its members visited the surviving MP churches and the Drama Theater, – said Petro Andryushchenko, an adviser to the mayor of Mariupol, on his Telegram channel.

After that, representatives of the Orthodox Church instructed the occupying authorities to restore the damaged MP churches and priests to send more prayer services to protect the Russian army. In addition, Petro Mohyla church, belonging to the Ukrainian Orthodox Church, will either be demolished or converted into a Russian Orthodox Church.

In the center of Mariupol, the occupiers are building modular homes – but they are not intended for Mariupol residents. According to Petro Andryushchenko, modular homes are intended for engineers and architects as a “construction headquarters”.

“Engineers and architects will live in the middle of the city. And the city residents – will end up on the frontline, covering the occupiers from the attacks of the Ukrainian army as a human shield. This is what real care looks like”, the mayor’s adviser resents.

There is a curfew in Mariupol. For children under 16 – from 21:00 to 05:00, for all other residents – from 23:00. Violators will be punished by arrest: arrest with the prospect of forced labor at the garbage collection, or a filtration camp.

The mayor’s adviser also reports that the Russian occupiers allow private cars to enter the territory of Ukraine to travel to Zaporizhia via Berdyansk.

“Private cars have been partially allowed to pass. The permission is very limited, but it still exists. Unfortunately, such a sudden passage of cars to Ukraine together with the partial withdrawal of the military contingent may once again indicate that the maneuvers are being covered by evacuation measures. However, do not neglect the opportunity. Evacuate while there is a window,” Andryushchenko emphasizes.

The Work of Drug Сourier

Mariupol residents began to receive messages en masse from an anonymous Telegram Channel “Mariupol-Volnovakha-Work” with an offer to work “at this difficult time.” The team of the mayor’s adviser went all the way from different accounts to find out what kind of work is offered to Ukrainians. As it turns out, this is the work of a drug courier.

“We can say that it is an offer to become a drug courier in the city where you are now. To leave drug caches. And although criminals try to avoid direct answers, this is true.

Therefore, our dear Mariupol residents, we know how difficult it is for you, but be careful and do not buy into these criminal proposals!”, Andryushchenko emphasizes.

The crime rate is growing in the occupied city. The highest level of gang formation is among teenagers who form gangs, loot, and rob elderly people, taking the money received as pensions. The current occupying power does not protect people and does not look for criminals.

The collaboration administration also continues to rob people. They open currency exchange offices working with bank cards. From the amount of money that is withdrawn, they take up to 30% of commission “in their pocket” or exchange at the rate of 1.5 rubles per one hryvnia, despite the official course, which is 2:1. Even with such an official robbery, there are long queues (pictured).

Lack of food and landfill fire

The fire continues at the enclosed landfill. Despite the bravura statements of the occupiers about the localization of the fire, not a single Ministry of Emergency Situations worker even appeared nearby in three days. Toxic smog continues to cover the Primorsky district. There is a high probability of fire at the solid waste landfill in the Left Bank district.