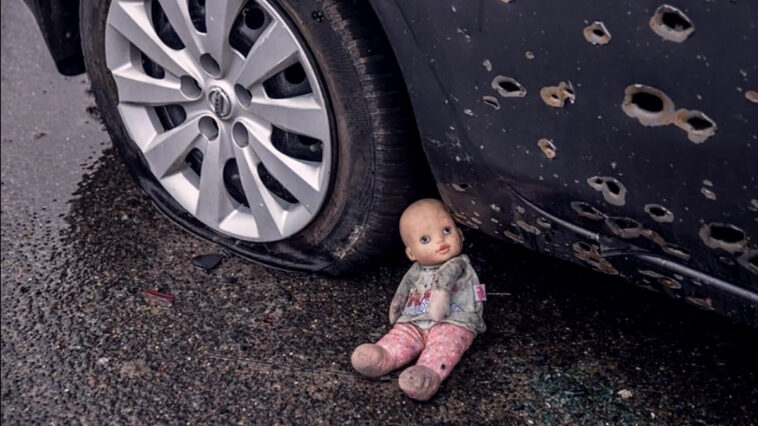 These days the whole world (including Ukraine) are paralysed with horror after seeing the pictures and hearing stories of the liberated towns of Irpin and Bucha. Joy from news of Ukrainian army seizing back the control over borders of Kyiv and Chenihyv regions was swiftly replaced by terrible pain and grief caused by scum(zz)’s terror in these Ukrainian towns in just one month of occupation and looting.

It seemed that neither Ukraine nor Lithuania or Poland would be surprised by the atrocities of russians, who had not changed their cruel ways of bringing “russian world” to other countries. However, one thing is to read about them in history books, another – to see them with your own eyes.

These criminal acts were unfolding in 21st century, in Europe, in prosperous towns near the capital of independent ( for 30 years!) Ukraine. Unfolding in the world where NATO, UN and many other organisations representing the values of security, human rights, looking into the future.

In 2022 while the world discusses upcycling in design, flights to Mars and 3D printed buildings, the horde of looters, rapists and russists are committing mass shootings of civilians, rape women and children, loot, torture and kidnap civilians. They commit these crimes in a foreign land which they came to “de-nazify” and “demilitarize” in order to re-create their soviet union, which used to satisfy their ambitions of imperialism and terror.

The level of shock these photos trigger, cannot be put into words. No one in a modern and civilized world can find the words to describe the shock one feels hearing the stories of the Bucha residents who had survived this nightmare.

Stupor and hate are the feelings that we are all feeling today. As my friend who left russia a long time ago, put it : “Russians know and understand these traits in themselves, when the outsiders get nauseated just thinking about justifying this behaviour.”

It cannot be more true as I don’t want to dig into the historical reasons why they became so inhumane. “How did millions of people become cannibals?” – a question which can have many answers. It’s partially their beloved culture which always depicted a russian person as someone who is very “special” and “spiritual” while the famous russian literature tells us that he just killed a grandma with an axe or drowned his dog.

Part of it is the transformation of the Victory Day (when USSR was liberated from the nazis during World War II) into a new symbol of militarization and imperial ambitions. And a phrase russians love to pronounce “we can repeat it” about the most terrifying war of the XX century (referring to repeating the World War II). A big part of it is absence of punishment for the crimes they commited in Georgia, Chechnya, Syria, Crimea and Donetsk&Luhansk regions. The absence of condemnation for the terror in soviet union carried out on occupied territories can also be added to the list.

After all, in Ukraine alone millions have fallen victim to Holodomor (famine), mass shootings of inteligensia in Sandarmokh otherwise known as “Shot at Rennaissance” (mass shootings of more than a thousand Ukrainian poets, writers and painters), forced deportation of Crimean tatars, labour camps and terror for the rogue.

The ugly face of modern russia has many grins which did not appear just yesterday or the day before.

When we say that atrocities in Bucha, Irpin, Hostomel, Volnovakha, Mariupol have no military reason and are surprised by the seemingly “pointless” savagery of russians, we have to remind ourselves that there is a point to all that. But the meaning of this is too terrifying and senseless for a modern person.

What it really is, is not putin or the regime, but rather the impunity of terror and hunger for blood, torture and violence nourished for centuries. It’s the willingness to destroy everything which is different, better or is not theirs. Each and everyone of those who thinks or wants to live differently, who wants freedom, beauty and happiness has to be eradicated. Quoting the famous russian fable by A.Krylov: “Your only fault is that I’m hungry” (again, the great russian literature…).

Atrocities of russia started a while ago and walk hand in hand with russian propaganda which had cynically asked today to call an urgent UN security council meeting to “condemn blatant provocations of Ukrainian radicals in the town of Bucha”.

As always, they try to lay the blame on us and on those who they systematically try to kill. In Syria, when russka used chemical weapons, she also said that it was a fake video and that “the dead bodies were not positioned naturally enough”. Finally today their propaganda has no value – the world sees all the truth live on their screens. Each crime is documented by Ukrainian and international experts, modern medicine can accurately determine the cause and time of murders. Nobody will be able to turn a blind eye to these acts of savagery. Even those who are worried about the rising prices of gas will know, that they pay extra just to rid the world of medieval horror and barbarism. It’s a small price to pay to eradicate an inhumane regime which, if not stopped today, will tomorrow be killing the civilians in other beautiful countries.