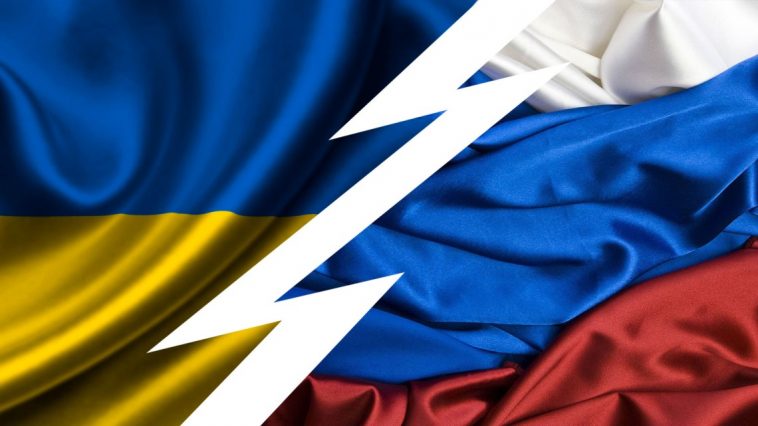 There’s an escalation in the combat zone in Donbas, and tensions mount on border with Ukraine. As Ukraine, the U.S. and the EU have condemned the escalation, the Russian Federation continues to flex its muscles. (Read “Russia masses troops near Ukraine border. A war to come?”). Several videos posted on social media show Russian fighting vehicles being massively moved by rail from Siberia to the Ukraine border. The bridge over the Kerch Strait linking Crimea and Russia was closed to allegedly enable a massive move of the military equipment into the occupied peninsula.

Russia-backed forces stepped up attacks on the contact line, and the Russian state television amped up the violent rhetoric. Besides, the spread of fake news intensified, here’s the analysis of a recent fake news story on the child’s death in the occupied territory: “Crucified Boy v.2 – How Kremlin’s Propaganda Justifies Escalation”. Does that mean that the “frozen war” between Russia and Ukraine is to enter a more intense phase?

A war with no end in sight. The conflict in Donbas began exactly seven years ago. Despite the numerous ceasefire deals, it has never really stopped. According to the UN, it has claimed over 13,000 lives since April 2014, and has displaced over one million people.

Most recent heavy fighting took place in Avdiivka in January 2017, while the exchange of sniper and mortar fire is routine. On March 26, 2021, an attack near Shumy, north of Donetsk, the biggest one in the past months, claimed the lives of four Ukrainian soldiers. Since July 2020, 45 Ukrainian troops have been killed in action and nearly 320 have been wounded, an official report from last month says.

Beginning in late March 2021, Russia has visibly intensified the movement of the troops near Ukraine’s eastern border, and in Crimea. Ukraine and its international partners have raised concerns over Russia’s military buildup.

Should Russia’s threat be taken seriously? Yes, definitely. What’s worth knowing is that the so-called winter drills of the Russian Federation Armed Forces are drawing to a close. They usually end with combat readiness exercises that include field training of the companies, battalions, and regiments.

Those exercises are expected to run until the end of April. Sometimes, the exercises focus on training high-end warfighting scenarios. Like in April 2019 when the Black Sea Fleet, and the 4th army of Russia’s Air and Air Defense Force practiced a simulated war scenario against NATO in the Black Sea.

This time, according to official reports, the Southern Military District of the Russian Federation will practice the defense of the Black Sea coast (including the occupied Crimea and Krasnodar Krai). More vehicles and weapons will be moved to Crimea. The exercise follows the training of the 7th air assault division (Novorosiysk) conducted throughout March 2021.

According to Texty.org.ua, at least 45-50 thousand troops will take part in the combat readiness exercises, operating in the single information environment.

Similar large-scale training will be also conducted in the Western and Central Military District of the Russian Federation as part of the combat readiness exercises. According to the OSCE Vienna Document 2011, the participating states need to give prior notification of the military exercises that include over 13,000 troops and invite observers. The Russian Federation is apparently ignoring the Vienna Document 2011.

What is the major difficulty facing Ukraine? Neither Ukraine, nor its Western allies can be 100 per cent sure if the drills are part of the massive combat readiness exercises or the beginning of the large-scale aggression. It is not possible to say at this point, as the sequence of actions is identical under both scenarios – troops are moved in, command and control, and supply system is deployed.

Russia has previously used military training to prepare for an offensive. That was the case in summer 2008, when Russia attacked Georgia, and in early March 2014, when it invaded Ukraine.

In 2014, the Russian Federation built up 78 battalions near the border with Ukraine as part of the snap combat readiness checks of the Southern, Western, and Central Military Districts. Besides, the Southern Military District is the smallest one, massive build-up of the troops also means that they can be quickly moved to Ukraine, and that Ukraine would have less time to respond.

To that end, the concerns of the Ukrainian command seem grounded. When an enemy can deploy against you up to half of the major assault forces in the three of the four military districts, there is no place for jokes.

What Russia wants: two theories. Neither Ukraine, nor the U.S., nor the rest of the Western world knows for sure what the Kremlin’s goal behind the massive military exercises and redeployment of the brigade combat teams is. Experts are divided between the version that it’s a demonstration of power, and the vision that local provocations may follow, set to greenlight the deployment of Russia’s “peacekeepers” (without an authorization from the OSCE or UN).

Supporters of the first theory say that’s it’s a demonstration of power set to intimidate Ukraine and send a signal to the Western states that Russia is ready for a rapid intervention.

“The ostentation with which the troops are being moved confirms that Russia is saber-rattling rather than contemplating a blitzkrieg,” wrote Maxim Samorukov in a commentary for the Carnegie Moscow Center.

In the past, Russia massively moved the troops as part of the military exercises that did not end in intervention, experts note. Some analysts say that build-up of the troops in that context does not count.

Still, supporters of the opposing theory point at the conflicts that Russia has started along its borders. These are the so-called “frozen conflicts” in Georgia (Abkhazia and South Ossetia), and Moldova (Transnistria).

The Russian troops came and stayed there as peacekeepers without an authorization from the UN or OSCE. The “peacekeepers” destabilize the situation to Moscow’s benefit.

Deployment of the OSCE peacekeeping contingent in Donbas was discussed before. There is no clarity, if the peacekeepers are to patrol the border or stay on the contact line.

Many experts are convinced that Russia would currently not dare to restart a large-scale war or try to seize a larger territory of Ukraine.

James Sherr, Senior Fellow of the Estonian Foreign Policy Institute at the International Centre for Defence and Security (Estonia) assumes that Russia wants to deploy the “peacekeepers” inside Ukraine.

“A localised escalation, dramatic and devastating, leading to the deployment of Russian ‘peacekeepers’ on the current demarcation line, is probably the most realistic option,” he wrote in the commentary for the International Centre for Defence and Security.