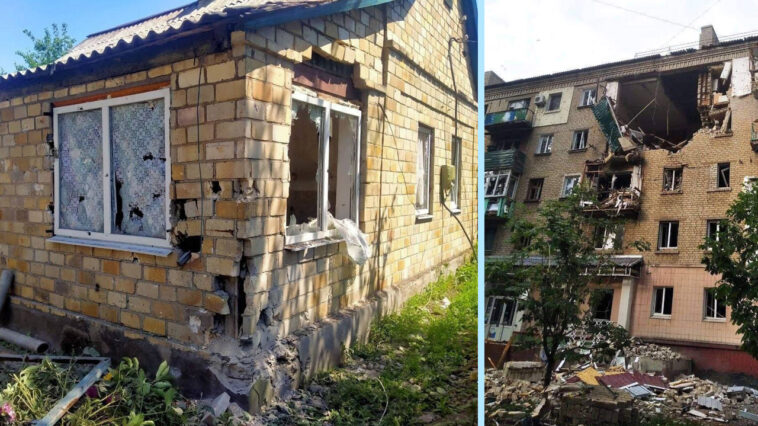 Over the past day, on June 2, the Russian occupiers killed at least 7 civilians in Donetsk and Luhansk regions, and wounded 8. Information about the injured and dead is being clarified. Russian criminals fired on 28 settlements.

5 large fires caused by enemy shelling in the cities of Lysychansk, Bakhmut, Avdiivka, and Bohoiavlenka of Volnovakha district. In a number of cases, fire and rescue units came under fire and were forced to return to their locations.

Pyrotechnics of the SES units, which are part of the Joint Forces group, found and neutralized 15 explosive devices in Bakhmut, Pokrovsk, Volnovakha, and Kramatorsk districts of Donetsk region.

Over the past 24hrs, rescuers evacuated 1,472 people from the areas of hostilities.

According to Serhii Haidai, head of the Luhansk Regional Military Administration, fighting is underway in Severodonetsk, and the Russians have launched an air strike on Myrna Dolina.

With little progress at the front, the enemy reports another victory over civilian infrastructure, beating homes and businesses.

In Severodonetsk alone, where fighting is taking place in the city center, nine houses have been damaged. In Lysychansk – two, as well as infrastructure and transport of the fire department. In particular, four cars that could go on fire and save lives. 16 houses were destroyed in Hirske, six – in Zolote, three more – in Toshkivka.

Yesterday morning in Lysychansk a woman was killed by a Russian artillery shell.

In addition, in the area of ​​Metolkino and Bilohorivka, the enemy tried to carry out assault operations, suffered losses, retreated to previous positions.

Since the beginning of the Russian invasion of Ukraine, 339 civilians have been killed in shelling and bombing in the Luhansk region.

According to Pavlo Kyrylenko, head of the Donetsk Regional Military Administration, on June 2, the Russians killed 3 civilians in the Donetsk region: 2 in Avdiivka and 1 in Staryi Karavan. Another 9 people were injured.

Excluding casualties in these cities, the Russians have killed 464 civilians in the Donetsk region since the beginning of the invasion and wounded 1,211.

With the beginning of the full-scale invasion of the Russian Federation, the residents of the Marinka community are under constant fire.

Most people have already left these places, but that is not enough. The head of the Donetsk Regional Military Administration calls on everyone to evacuate!

One person was killed and two others were injured in the shelling of Soledar by the Russians. On June 1, a shrapnel hit almost the city center when people were there. The Russians are constantly bombing residential neighborhoods, so all civilians should leave the region.