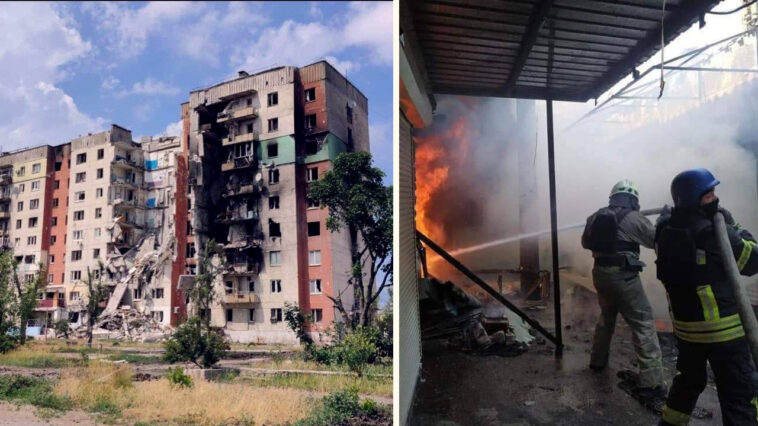 The enemy continues to kill the civilian population of the Ukrainian Donbas. For the previous day, at least 8 civilians have been killed and 15 injured. Information about the victims and the dead is being constantlyclarified.

Russian troops destroyed and damaged 59 civilian objects. Among them: 48 residential buildings, twice – Phoenix Poultry Farm (Maiaky), PAOK Enterprise (Mykolaivka), the building of the Department of Civil Defense and the premises of the family sports club “Magama” (Severodonetsk), an administrative building of the village council and a shop (Orlivka), kindergarten, lyceum № 14, mining and industrial college, pavilions of the Central Market (Lysychansk), cafe (Avdiivka).

As a result of the shelling of the city of Niu-York, houses were damaged, people are under the rubble, search and rescue operations are underway.

Over the past day, rescuers evacuated 1,238 people from the areas of hostilities.

According to Serhii Haidai, head of the Luhansk Regional Military Administration, the Russians fired on the market, a mining college and a school in Lysychansk, where two people were injured, and the fighting for Severodonetsk is in full swing.

For several hours, rescuers eliminated the fire in the trade pavilions of the market with a total area of ​​1,000 square meters.

The flames were extinguished only closer to evening.

The city’s educational institutions were also destroyed – the building of the Mining and Industrial College, which practically burned down, as well as the secondary school, from where two victims were evacuated. Three more wounded in Lysychansk and Pryvillia were hospitalized in medical institutions of other regions – two men and a woman.

On the morning of June 6, there was a massive shelling of the city of Zolote, where, according to preliminary data, 13 houses were destroyed at once. In the afternoon, the Russians hit the town of Hirske – 11 damaged houses.

Since the beginning of the Russian invasion of Ukraine, 345 civilians have been killed in shelling and bombing in the Luhansk region.

According to Pavlo Kyrylenko, head of the Donetsk Regional Military Administration, on June 6, the Russians killed 4 civilians in Donetsk region: 2 in Niu-York, 1 in Chasov Yar, and 1 in Pisky. Another 7 people were injured.

Also yesterday the authorities managed to clarify the information about 1 dead in Lyman and 2 wounded in Lyman community.

In addition, 4 civilians were injured in Kostiantynivka in Luhansk region.

Excluding casualties in these cities, the Russians have killed 478 civilians in Donetsk since the invasion and wounded 1,238.