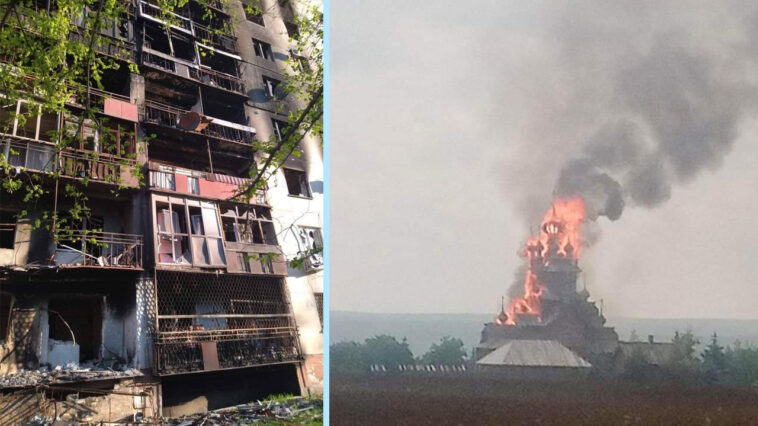 The enemy continues to kill the civilian population of the Ukrainian Donbas. During the yesterday, on 5 June, at least 8 civilians were killed and four were injured. Information on injured and dead is being clarified.

Russian troops fired on 22 settlements in Donetsk and Luhansk regions.

Pyrotechnics of the SES units, which are part of the Joint Forces, found and neutralized 10 explosive devices in the Pokrovsk and Volnovakha districts, in the cities of Sloviansk and Lysychansk.

Over the previous day, rescuers evacuated 1,491 people from the areas of hostilities.

According to Pavlo Kyrylenko, head of the Donetsk Regional Military Administration, on June 5, the Russians killed 3 civilians in the Donetsk region: 2 in Avdiivka and 1 in Druzhkivka. 2 more people were injured.

Excluding casualties in these cities, the Russians have killed 473 civilians in Donetsk region since the beginning of the invasion and wounded 1,225.

According to the head of the Donetsk Regional Military Administration, yesterday the All Saints church of the Sviatogorsk Lavra monastery burned down as a result of the shelling of Sviatogorsk, but this is not the first religious building destroyed by the Russians.

In Sviatogorsk alone, which combines three architectural and cultural monuments, the Russians damaged a historical and architectural museum, destroyed a temple, two hermitages and two cells of the Sviatogorsk Lavra, killing four monks.

In total, the Russians have destroyed or damaged at least 43 religious buildings in the region – the vast majority of which belonged to the Moscow Patriarchy.

“This is a purposeful destruction of any manifestations of Ukrainian culture. Russia must be stopped – otherwise the culture of other European nations will be threatened,” Pavlo Kyrylenko stressed.

According to Serhii Haidai, the head of the Luhansk Regional Military Administration, the Russians are storming Severodonetsk, there is a lot of destruction in the Hirske Community.

Rescuers extinguished the fire in an area of ​​about 1,000 square meters. meters in Lysychansk. The Russians fired on a bakery that baked bread for the locals to the last moment.

In addition to the bakery, several government buildings and two high-rise buildings were damaged.

A local woman was wounded during the enemy shelling of Pryvillia. She was taken to hospital by police.

More serious destruction in the mountain community. These are 16 houses in Zolote, three – in Hirske. Also, six houses were destroyed in Vrubivka.

It is difficult to count how many destructions are in Severodonetsk, because street fights are taking place there. However, the Armed Forces of Ukraine are defending themselves. President Zelensky, who visited our advanced positions in Luhansk region at night, was convinced of this.

The occupiers carried out assault operations in the areas of Bilohorivka and Mykolavka. The enemy suffered significant losses in manpower and equipment.

Air strikes were inflicted on civilian infrastructure in Lysychansk.

Since the beginning of the Russian invasion of Ukraine, 345 civilians have been killed in shelling and bombing in the Luhansk region.