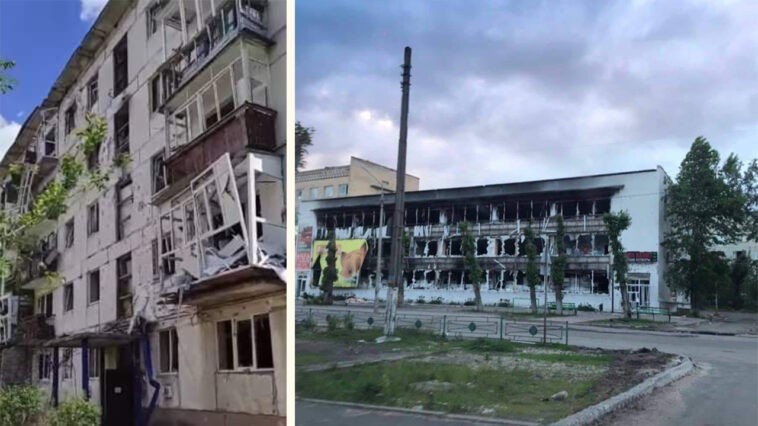 During the day, on May 26, Russian war criminals killed 13 civilians in Donetsk and Luhansk regions and wounded at least 15. During the day, 55 settlements were shelled by Russian troops.

The enemy destroyed and damaged 169 civilian objects, including: 137 houses, 12 private enterprises, a mechanical workshop of the Artemsil mine, a fire brigade with special equipment, garages, cars, as well as a school, recreation center “Zelenyi Gai”, hotel complex “Lysychansk” and “Budynok Tekhniky”, which houses the center of humanitarian aid of Lysychansk.

Units of the State Emergency Service, which are part of the Joint Forces, eliminated 6 fires in the Donetsk region in one day as a result of enemy shelling: in Soledar, Sviatogorsk and Khrestyshche. In the Luhansk region, due to intense enemy shelling, firefighting is impossible.

Over the past day, rescuers evacuated 759 people from combat areas.

According to Serhii Haidai, head of the Luhansk Regional Military Administration, throughout the day the Russians tried to push their way into Severodonetsk from Purdivka and Shchedryshchevo, attacking the positions of our military in the Ustynivka area.

Residents of Severodonetsk have already forgotten when the city was silent for at least half an hour. Russians are continuously shelling at residential neighborhoods.

On May 26, four Severodonetsk residents were killed by enemy shells. All – in the old districts of the city. Two of them – at the same time, near one high-rise building.

Damage to the housing stock was added – 11 apartment buildings and one private house. And this is exclusively in Severodonetsk.

It is estimated that 19 objects were destroyed after a powerful artillery attack on Lysychansk on May 25.

On May 26, the Russians opened fire on a police station. Fortunately, no one was injured.

Another man was killed by a Russian shell yesterday in Komyshuvakha. It also became known about the death of two women in Hirske during the last week.

In general, in Popasna and Hirske communities the destroyed housing cannot be counted. What is known about May 26: 11 houses in Zolote, nine – in Hirske, eight – in Toshkivka, four – in Nyrkove, three – in Mykolaivka.

Since the beginning of the Russian invasion of Ukraine, 330 civilians have been killed as a result of shelling and bombing in the Luhansk region.

According to Pavlo Kyrylenko, head of the Donetsk Regional Military Administration, on May 26, the Russians killed 5 more civilians in Donetsk region: 2 in Marinka, 2 in Lyman, and 1 in Zoria.

Also today the authorities managed to clarify the information about 1 dead and 1 wounded in Dibrova.

Excluding the casualties in these cities, the Russians killed 437 civilians of the Donetsk region, 1169 were wounded