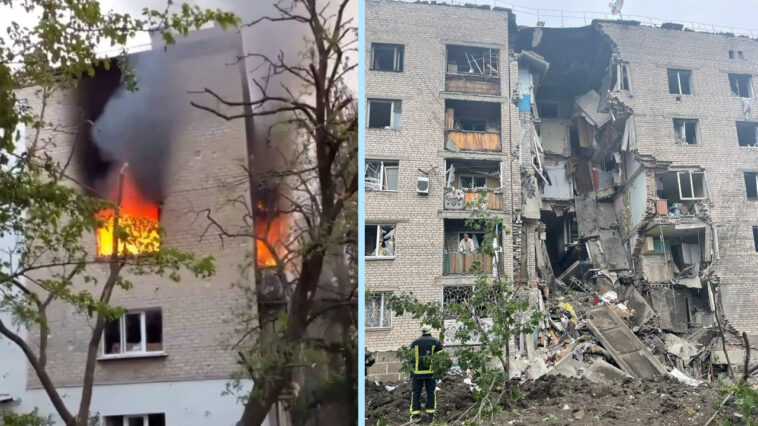 Yesterday, on May 19, about 20 civilians from Donetsk and Luhansk regions were killed by Russian missile bombings and artillery shelling. At least 50 people were injured. Preliminary, the number of victims in Severodonetsk, Avdiivka, Lysychansk, Marinka, other towns and villages may be much higher, the information is being clarified. Rescue and search operations are underway, which are complicated by air strikes, intense missile strikes and artillery shelling of the enemy.

Moscow war criminals continue to destroy the infrastructure of Donbas. With barbaric airstrikes and shelling, the Ruscists completely destroyed or damaged 105 residential buildings and 15 other civilian objects in one day, including a hospital, a dormitory, a sports complex, a shopping center, a bank building, a sanatorium, a regional education department, and a car company, a warehouse, gas pipeline, cars.

The high-rise buildings in Severodonetsk, Lysychansk, Avdiivka, and Bakhmut were severely damaged.

In the Donetsk region, State Emergency Service units eliminated 6 fires caused by enemy shelling. In the Luhansk region, firefighting is impossible due to intense shelling of settlements.

Units of the SES, which are part of the Joint Forces, continue to provide assistance to the population: water and humanitarian supplies have been delivered to the affected areas of Toretsk, Avdiivka, Krasnohorivka, Bilytske, Lysychansk, and Pokrovsk.

During the day, rescuers evacuated 1,044 people from the areas of hostilities.

According to  Serhii Haidai, head of the Luhansk Regional Military Administration, the Russians are conducting an offensive operation in the areas of Lysychansk and Severodonetsk. There are more than 60 destroyed houses in the Luhansk region.

Last night 12 people died in Severodonetsk, one – in the village of Hirske. Houses are being destroyed and burned down. In some places, like in Nyrkovo, there are five houses in a row. In Zolote – six, in Vrubivka – three, three more – in Rubizhne. It is impossible to count the damage in Toshkivka, where hostilities continue.

Data on the dead and injured are still being clarified, as it is impossible to inspect the area under fire. The authorities now have 12 killed and more than 40 injured, who are receiving medical treatment.

However, the assault on Severodonetsk was unsuccessful – the Russians suffered personnel losses and retreated.

The aftermath of the offensive was considerable: residents were killed and at least five high-rise buildings destroyed.

The situation is not better in Lysychansk and nearby cities. Thus, 12 houses were damaged by shelling in Lysychansk, 14 in Novodruzhesk, and 17 in Pryvillia.

Since the beginning of the Russian invasion of Ukraine, 301 civilians have been killed in shelling and bombing in the Luhansk region.

According to Pavlo Kyrylenko, head of the Donetsk Regional Military Administration, on May 19, the Russians killed 5 civilians in the Donetsk region: 2 in Bakhmut, 1 in Krasnohorivka, 1 in Avdiivka, and 1 in Khrestyshche. Another 6 people were injured.

It is currently impossible to establish the exact number of victims in Mariupol and Volnovakha.

The Russians struck another air strike on Bakhmut.

“The Russians continue to shoot at civilians, but timely evacuation allows us to save hundreds of lives. Of the 73,000 inhabitants of Bakhmut, just over 20,000 now remain in the city, thanks to which we are able to avoid the number of casualties that the enemy expects. Once again, I ask everyone who has the opportunity to leave the Donetsk region. Now there are no absolutely safe places in Donetsk region. Evacuation saves lives!” Pavlo Kyrylenko stressed.

Since the beginning of the Russian invasion of Ukraine, 397 civilians have been killed and 1,109 wounded in shelling and bombing in the Donetsk region. The number of Russian victims in Mariupol and Volnovakha is currently unknown.