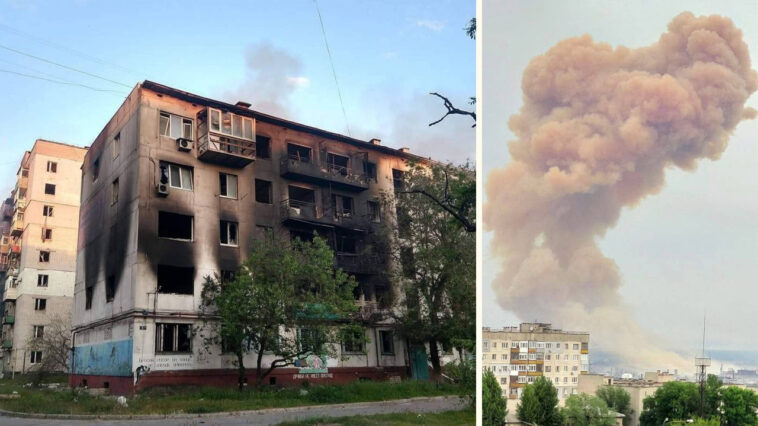 Over the past 24 hours, on May 31, four people were killed and at least 10 were injured in enemy air and missile strikes and artillery shelling in Sloviansk, Severodonetsk, and Raihorodok. Information about injured and dead is constantly updated.

Russian troops fired on 21 settlements in Luhansk and Donetsk regions.

Russian war criminals destroyed and damaged 46 civilian objects, including 40 high-rise and private buildings, an art school (Hirske), a kindergarten (Yarova), and the farm buildings of the Proletariy plant (Lysychansk). The building of the police station in Avdiivka was damaged. During the airstrike on the territory of the Severodonetsk Azot chemical enterprise, a tank with nitric acid was destroyed, as a result of which chemikals leaked.

Pyrotechnics of the SES units of the Joint Forces found and neutralized 43 explosive devices in Bakhmut, Pokrovsk, Volnovakha, and Kramatorsk districts of Donetsk region.

3 large fires caused by enemy shelling in Sloviansk and Yarova of Kramatorsk district were eliminated.

Over the past day, rescuers evacuated 13,907 people from the combat areas.

According to Serhii Haidai, head of the Luhansk Regional Military Administration, the Russians are storming, consolidating their forces in the center of Severodonetsk, while continuing to destroy infrastructure and industrial facilities.

Yesterday at 18:55, the occupiers attacked the Azot enterprise from an airforce, which resulted in the release of toxic substances.

During the day, the enemy fired with artillery at the Proletary plant in Lysychansk, damaging several buildings. The cynical destruction of the housing stock continues.

In Hirske, the Russians destroyed at least six houses and a local art school, in Vrubivka – six houses, in Novoivanivka – five, in Severodonetsk – four, in Lysychansk – three, in Mykolaivka – two.

The occupiers carried out assaults on May 31 in the northern, southern and eastern districts of Severodonetsk, and are consolidated in the city center.

The Russians control 70% of Severodonetsk. Some Ukrainian troops moved to more advantageous, pre-prepared positions. Another part – continues fighting inside the city.

Lysychansk is completely under Ukrainian control.

All free settlements of Luhansk region are constantly under fire.

The evacuation in Luhansk region has been suspended.

It is not possible to import humanitarian supplies to Severodonetsk (the hospital has a sufficient amount of medicines and other medical supplies, humanitarian staffs have stocks of food – this may be enough for a while).

Since the beginning of the Russian invasion of Ukraine, shelling and bombing have killed 336 civilians in the Luhansk region.

According to Pavlo Kyrylenko, head of the Donetsk Regional Military Administration, on May 31, the Russians killed four civilians in the Donetsk region: 3 in Sloviansk and 1 in Raihorodok. Another 7 civilians were injured.

Excluding casualties in these cities, the Russians have killed 454 civilians in Donetsk region since the beginning of the invasion and wounded 1,192.

Yesterday, the Russians launched a missile strike on a residential area of ​​Sloviansk.