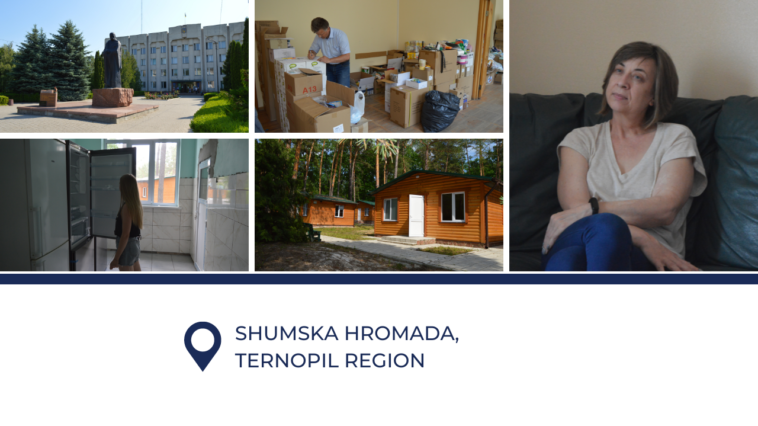 The Shumska urban territorial community (hromada) in Ternopil region became a second home to Ukrainians fleeing the war and occupation. There are 1,571 new residents in the community. The biggest challenge facing the hromada is temporary housing for internally displaced persons. They live in schools, hotels, and hostels. Some stay with local families. People, who had to flee their homes, also need a job, and quality social, utility, medical, and educational services. We traveled to the Shumska territorial community to see how the cooperation between the hromada and the USAID Decentralization Offering Better Results and Efficiency (DOBRE) Program helps the community to cope with war consequences in Ukraine.

In 2015, 44 towns and villages voluntarily united into the Shumska urban territorial community (hromada), one of the largest in Ternopil region. It has a population of around 25,000. Shumsk is the hromada’s central town. Its history dates back to the 10th century. The town has more than 5,000 residents. Shumsk is a two-hour drive from Ternopil, the region’s capital city. In downtown Shumsk, life swirls. It’s common to see horse wagons and cyclists alongside passenger vehicles. Those are optimal modes of transportation in times of fuel shortage.

The hromada’s administrative building stands on the central street, Ukrainska. It overlooks the monument to Ukrainian poet Taras Shevchenko installed to mark the 850th anniversary of the first written record of Shumsk. A quote from Shevchenko’s poem is engraved into the monument’s base: “Deeds of the good will replenish themselves, deeds of the evil will vanish.”

“On the first day of war, I was shocked. But I also had my spirits high as the hromada residents kept calling me to ask how they can help,” the head of Shumska hromada Vadym Boyarskyi said after we were introduced to each other.

On February 25, the hromada already welcomed the first internally displaced persons from Chernihiv region. Those were the wives and children of border guard service members. They chose to move their families to safety in the face of Russia’s looming full-scale invasion. A few days into the war, the Shumska hromada set up and staffed operative headquarters. The hromada registered the people who continued to arrive, and supplied them with critical necessities, clothes, and food. In the first days of the large-scale invasion, Shumska hromada was a destination for residents of Chernihiv and Kyiv regions fleeing the war. Later, residents of Luhansk, Donetsk, Kharkiv, Mykolayiv, Kherson, Zaporizhzhia, and Odesa regions resettled to the community. The Shumska hromada hosted around 3,000 internally displaced people since the war began. Half of that number continue to stay.

The hromada provided housing for refugees in hotels and schools, Vadym Boyarskyi said. Some families offered their home to refugees. Temporary housing was one of hromada’s biggest challenges. The Ministry of Education recommended to begin preparations for a new academic year. Children will go to schools that have bomb shelters. Hromada’s schools are still used as temporary housing for refugees, hosting a total of 42 people. Housing is still a challenge.

“In the first days of war, together with our partners from DOBRE Program that we’ve been working with for several years, we discussed possible solutions to the housing hurdles facing community’s new residents. We chose to place 100 refugees in a resort facility. We also agreed that DOBRE Program will provide them with new furniture items, blankets, bed linens, crockery, kitchen appliances, and washing machines. Our joint project nears completion. I will show you the housing center that we installed,” the head of the hromada said.

Within the Shumska hromada, there is an understanding that to properly integrate the internally displaced persons, the community also needs to provide them with jobs, and quality social, utility, medical, and educational services, in addition to housing. Some of the hromada’s private companies already hired refugees, Vadym Boyarskyi said. One of them is the Shumsk butter plant that restarted operations in January 2021. It employs 60 workers and plans to expand operations. Reopening of the factory also supports cattle breeding at local farms. Families that breed cows and supply milk to the factory, earn up to UAH 15,000 (approx. USD 507) a month. There is also a sewing facility that produces work uniforms. Local utilities and a hospital that provides both primary and secondary care are ready to hire the refugees.

Vadym Boyarskyi shows us a former rayon hospital now transferred to community ownership. The Shumska and Velykodederkalska hromadas united their primary care services in a single facility to improve their quality.

We go inside a three-story hospital located near the hromada’s administrative building. Patients queue at the reception and wait in the corridors. The corridors still resemble the Soviet times during which the facility was built. Yet some of the units – the general medicine, pediatric, neurology etc. units were renovated and modernized. The surgical unit and a primary care facility are being renovated now. The hospital has advanced equipment and experienced personnel. It signed a contract with the National Health Service of Ukraine that covers the cost of 15 service packages provided to patients. The hospital admits six thousand patients a year. They are residents of the Shumska hromada, and of other communities in Ternopil and Khmelnytskyi regions. Quality medical services result from joint efforts by the state, hromada, international donors, and private charities. Within cooperation with DOBRE Program, the hromada installed an ultrasound imaging room based on a survey it conducted among the residents. It is of great help to the facility in diagnosing and treating patients.

Across the road from the hospital, there is a kindergarten. It continues to work, and children eagerly play on a playground that the hromada jointly installed with DOBRE Program. During the four years of cooperation with DOBRE Program, the community designed a long-term development strategy and implemented nine large and small projects. Besides the already mentioned, the hromada installed outdoor sports facilities in the Shumsk gymnasium, and in Rokhmaniv village. Modern equipment was installed in the physics lab of the gymnasium. Equipment and software was provided to the office of administrative services to collect data for biometric passports.

We saw waste carts near private houses. They are part of a joint project between the hromada and DOBRE Program seeking to improve solid waste management. All projects implemented within cooperation with the program boosted the community’s capacities. It also helps to meet the challenges facing the community in times of war.

“Housing for refugees is important. People like me need a safe place to stay.”

We wanted to meet the people who fled the war. The head of the hromada Vadym Boyarskyi took us to a place where refugees from Kyiv and Kharkiv regions, and other areas live. Sixteen people stay in a two-story house. Pre-war, its owner planned it as a hostel. He let the refugees live there for free.

We meet 51-year-old Valentyna Koval. Others kindly call her “mum”. She keeps the house well-organized. We sit down in the large living room. A long wooden table with a cloth cover and benches stands in the middle of the room. The house is clean and cozy. Children run into the room. They are curious about the guests. They show us their plush toys, smile at us and want us to play with them. It’s hard to imagine what they have been through.

Valentyna finds it hard to speak. She resettled from Yakovlivka, a village in Merefyanska hromada, in Kharkiv region. On March 2, Russian aircraft threw bombs on her village. One of them hit a local community club that is just 100 meters away from her house. “We were at home when we heard the first explosion. Then came the second one. We jumped out a window and hid in the basement. The shock wave blew out windows and doors in our house,” Valentyna said.

The family stayed all night in the basement. Next day, she learnt that the godparents of her child were killed. That night, four residents were killed in Yakovlivka, and 14 more were wounded and taken to hospital. More than half of the houses were destroyed. The attacks blew windows and roofs off the houses. Her family decided to leave – it was no longer possible to stay in the house. Her son’s teacher hosted them in Merefa overnight. Then they joined their friends headed westwards, to Shumsk in two cars. The hromada welcomed them cordially, Valentyna says. The community helps them with everything. A lot of help also comes from a local Christian church.

The new residents of the hromada do not sit idle. Valentyna shows us her vegetable garden.

“We have cucumbers there, salad and tomatoes here. We planted potatoes over there. I am not going home until I gather the crops,” the woman smiles.

The refugees help the community. They joined neighborhood cleanup activities (toloka), and cooked meat stew for the military in the frontline together with local residents. The men tiled the housing center for the refugees.

“Housing for internally displaced persons is an important project. People like me need a shelter, a place where they will feel safe,” Valentyna said.

Valentyna’s daughter Yulia goes with us to see the housing facilities.

Built as a children’s summer camp, “Dyvosvit” was owned by the Shumsk rayon council. A few years ago, 19 new wooden houses with bathrooms and hot water heaters funded from state and local budget provisions, were installed.

In late 2020, the facility was transferred to community ownership, and the hromada hoped to relaunch it. The war changed their plans. The camp in the pine forest will soon shelter around 100 refugees.

Each house will have new beds, mattresses, ben linens, blankets, pillows, wardrobes, and chairs, all funded by DOBRE Program. We also saw new kitchen equipment purchased within the project. A separate block was projected as a shared kitchen facility where people can cook. Tables and chairs bought through DOBRE program will be installed in a large dining room. Hot water boiler was brought in as we watched the kitchen under construction. There will be a shared laundry room. Washing machines and dryers just need to be connected. DOBRE Program will provide a total of USD 100,000 worth of equipment, furniture, household appliances, bed linens and other critical items for hromada’s refugees.

Internally displaced people will soon move to the housing center from the schools they now live in, Vadym Boyarskyi said. The hromada is also ready to host Ukrainians who evacuate from the hot spots now. The Shumska community stands ready to become a second home to everyone who needs it.