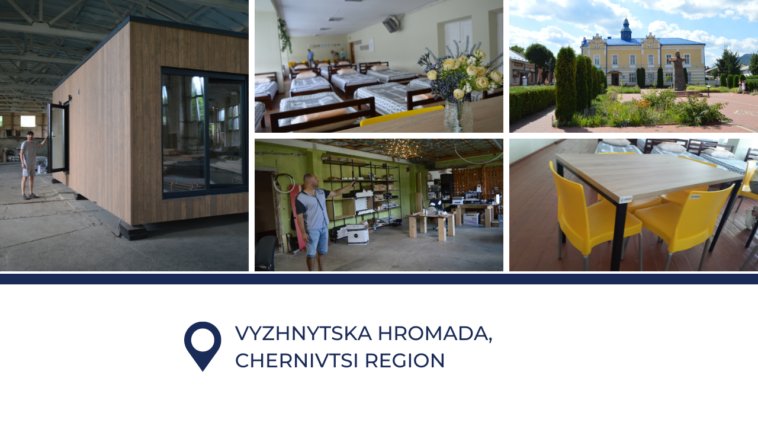 Vyzhnytska urban community (hromada) established in 2017 – a partner of the USAID DOBRE Program – shelters about four thousand internally displaced people and hosts the companies that relocated.

Vyzhnytsia, the administrative center of an urban territorial community (hromada) in Chernivtsi region, is often called the gates of the Carpathians in the region of Bukovyna. Its clean air and natural beauty, thought to have healing power, turned it into a resort a long time ago. Ukrainian writers Ivan Franko, Mykhailo Kotsyubynskyi, and Lesya Ukrayinka visited Vyzhnytsia, a land of blue mountains crossed by the Cheremosh river. Music by singer Nazariy Yaremchuk and the band “Smerichka” is rooted in the land. The Cheremosh river also separates the area from neighboring Ivano-Frankivsk region.

There are several sites in the center of Vyzhnytsia that are examples of medieval architecture – the square, market, city hall, and narrow streets with sidewalks. The building that was constructed as the city hall now houses a municipal court, not the city council. The office of the city council is in simple premises, a line of internally displaced people queuing for humanitarian aid at its doors.

We meet with the head of the Vyzhnytska urban hromada Oleksiy Chepil in his office. Our conversation flows about the advantages of the decentralization reform. He tells us what helps the community stand on its feet and deal with the challenges posed by the war.

“We voluntarily united [into a hromada] in 2017. We made the right decision. We got the powers and funds. As a community that was established voluntarily, the hromada received additional state funds to develop local infrastructure, healthcare and education sectors,” Oleksiy Chepil remembers.

International assistance programs, and the USAID DOBRE Program in particular, trained representatives of the hromada to be transparent and publicly accountable at work, engage civil society, and efficiently use resources and funds, Oleksiy Chepil said. The Vyzhnytska hromada established anticorruption and youth councils, conducted a financial audit and an inventory audit of the community property, adopted a registry of the community property, a privatization and rent ordinance, and other local government documents.

The hromada together with DOBRE Program equipped the session hall of the city council with voting devices, and set up audio visual and broadcast equipment. DOBRE purchased an electronic voting system, including a server and software, and 27 tablets for the members of the city council. The hromada bought a display, projector, and speakers.

Before the Covid pandemic and Russia’s full-scale invasion of Ukraine, the Vyzhnytska hromada used to host several large Hutsul ethnic festivals a year, the head of the hromada said. Concerts of Ukrainian and international ethnic music bands and artisan markets were part of the gatherings. Hundreds of tourists used to come here for the festivals. The hromada supported by the USAID DOBRE Program commissioned the design of the zoned area of the Vichovyi Maidan (square). It also received a mobile stage that the community plans to use extensively after the war.

“The war changed our plans for development. Since the full-scale invasion, the Vyzhnytska urban hromada has hosted about 4,000 internally displaced people. We completely reshaped our work to help those who fled the war,” Oleksiy Chepil said.

Since the early days of the Russian onslaught, internally displaced people from the regions of Kyiv, Mykolayiv, Donetsk and elsewhere have been coming to the hromada.

Housing and food were the primary needs of the refugees. The hromada hosted them in private houses and at municipal sites – in kindergartens, schools, and community houses. The community relied on its budget, and local residents volunteered to help. Then, international organizations began to provide humanitarian assistance. The USAID DOBRE Program revised its activities to include assistance for internally displaced people. The program supported eight hromadas in western Ukraine to improve housing conditions for the refugees.

Most of the assistance was sent to the refugee shelters. The head of the hromada introduces us to the business owners who moved their companies to the community.

We meet Maksym Levanets who owns a company that manufactures LED lights. In 2018, he registered the trademark Lumof. He’s got clients in Ukraine, Poland, Germany, Belgium, and Iceland. The production facilities were located in Mykolayiv, and the office in Irpin.

“I lived in Irpin with my family, my windows overlooking Hostomel. We saw and heard everything. On February 25, we packed one bag and left. Someone we know helped us get to Vyzhnytsia,” Maksym said.

He still gets offers from other communities, and if it weren’t for the hromada and its head that help him a lot, he would go elsewhere.

Maksym and his family were provided housing in an administrative building of a local company, Ukrainian Green Technologies. Twelve internally displaced families live on two floors of the building. They pay zero rent and only pay electric bills. The hromada and international organizations, including DOBRE Program, helped the new residents get clothes, furniture, refrigerators, electric kettles, and microwaves. The hromada also provides social services.

“Our children go to kindergarten for more than a month, and our older children prepare to go to school. We can focus on our business,” the entrepreneur said.

He moved the equipment and unsold products to Vyzhnytsia through the state program for relocating businesses. Together with the head of the hromada, he was looking for a site to locate production facilities, and chose to accept an offer by the owner of the building where they now live. They agreed that the company will begin to pay rent as soon as it earns its first profit.

The owner of the business says he will move the production facilities back to Mykolayiv after Ukraine wins the war. He will leave a company’s branch in Vyzhnytsia. The company in Vyzhnytsia now employs seven people, of which four are on probation, and two female workers are internally displaced. Maksym also plans to expand his business in the Vyzhnytska hromada. He wants to start a furniture manufacturing company and a production facility to paint furniture and metal parts.

A manufacturer of modular homes from Kyiv also relocated to the building of the Ukrainian Green Technologies. The owner Oleksandr Koshovyi moved his company – equipment, sections of homes, and materials – through the state program for relocation of businesses, and restarted production in Vyzhnytsia. Ten employees of the company also moved here. Oleksandr plans to work both in Kyiv and in the hromada in the future. He is now implementing a project in the hromada that has become his new home. Supported by international charities, the company manufactured two modular homes that were installed in the village of Chornohyzy in the Vyzhnytska hromada. The city council of Vyzhnytsia provided land for the houses where internally displaced people will live. The hromada set utilities in the houses, including electricity. The community plans to scale up the project.

A community house in Chornohyzy village is renovated into a shelter for internally displaced people. The hromada anticipates a flow of refugees who will have to flee eastern Ukraine in autumn due to destroyed infrastructure and fighting.

The Vyzhnytska hromada values the new residents as a priceless asset that will create momentum and encourage hromada’s dynamic growth in near future.