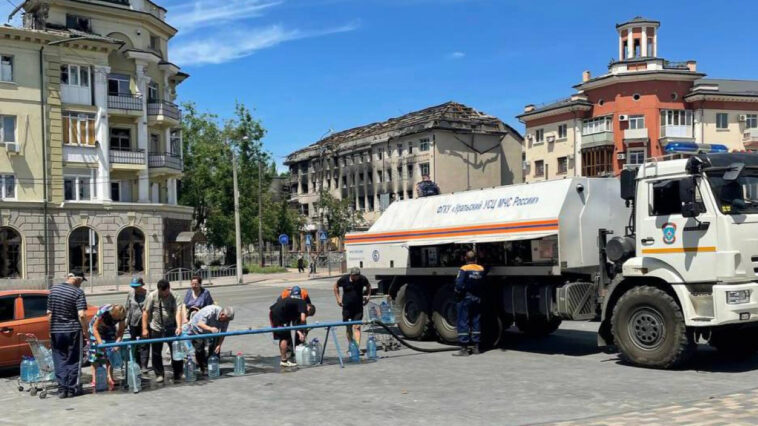 Mariupol continues to live under occupation. Russians only make pictures for screens, and don’t care about people. Mariupol residents are forced to literally fight for humanitarian aid from the occupiers.

According to Petro Andriushchenko, adviser to the mayor of Mariupol, locals must first register in the queue and wait for 2-3 days. On the day of the “queue” a person has to be among the first 300 lucky people in the live queue.

There is no place to hide from the burning sun in the square where the humanitarian aid is distributed. Food kits that are given to people without a refrigerator can quickly go spoiled.

Despite the nice pictures from the propagandists, the city is catastrophically short of doctors. They have already begun to “persuade” retirees over the age of 80 to return to work, Andryushchenko noticed.

The city lacks not only narrow specialists, but also general therapists. Residents are offered to “wait” or go to Donetsk on their own.

In the photo published by Andriushchenko, the list of doctors of Mariupol Hospital №3. It now serves the Central and Primorsky districts, where live at least 70 thousand people.

Another lie from the occupiers – the restoration of water supply in the city, namely – 650 km of pipes repaired. But in fact on the Theater Square there is a device with rusty pipes through which water flows from the car for firefighting of the Ministry of Emergencies of Russia.

In addition, a new cemetery of cars was discovered in Mariupol. It is located on the penalty area on Nikolsky Avenue in the Illich district. It is reported that Mariupol residents cannot pick up or disassemble their own cars.