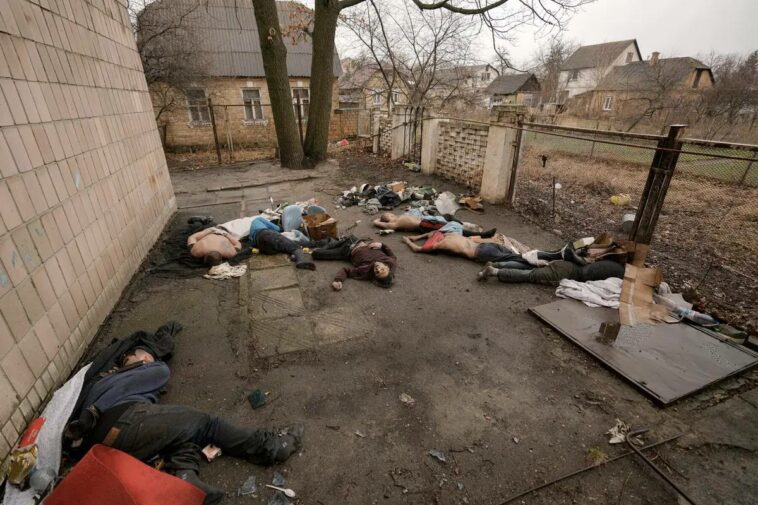 The New York Times published new evidence of the atrocities of the Russian occupiers in Bucha on May 19.

Journalists showed photos and videos of paratroopers of the Russian Armed Forces committing war crimes against civilians on March 4 while in Bucha. The Russians shot dead 9 locals who were unarmed and unable to resist the soldiers. Before the execution, the men were forced to walk a tightrope, bending over and holding on to each other, threatening them with machine gun barrels.

The videos, filmed on March 4 by a security camera and a witness in a nearby house and obtained by The New York Times, are the clearest evidence yet that the men were in the custody of Russian troops minutes before being executed.

“Hostages are lying there, against the fence,” the person filming one of the videos says. He counts: “One, two, three, for sure, four, five, six …” In total, nine people are being held.

The men are forced to the ground, including one wearing a distinctive bright blue hooded sweatshirt.

The video ends. But eight witnesses recounted to The Times what happened next. Soldiers took the men behind a nearby office building that the Russians had taken over and turned into a makeshift base. There were gunshots. The captives didn’t return.

A drone video filmed a day later on March 5, also obtained by The Times, is the first visual evidence that confirms the eyewitness accounts. It showed the dead bodies lying on the ground by the side of the office building at 144 Yablunska Street as two Russian soldiers stood guard beside them. Among the bodies, a flash of bright blue was visible — the captive in the blue sweatshirt.

On the other side of the building stood Russian military equipment. There they noticed a truck and an armored personnel carrier with the same “V” signs. Therefore, it confirms that the Russians committed genocide in Bucha.

When Ukrainian defenders drove the occupiers out of the Kyiv region, many mass graves began to be found in the region. However, in Bucha most of the bodies lay in the middle of the street or in the yard. This was the case with these prisoners who were shot on Yablunska Street. They were found there after the liberation of the city on April 3.

To uncover what happened to these men, The Times spent weeks in Bucha interviewing a survivor, witnesses, coroners, and police and military officials. Reporters collected previously unpublished videos from the day of the execution — some of the only evidence thus far to trace the victims’ final movements. The Times scoured social media for missing persons reports, spoke to the victims’ family members and, for the first time, identified all of the executed men and why most of them were targeted.

They were husbands and fathers, grocery store and factory workers who lived ordinary civilian lives before the war. Nearly all of them lived within walking distance of the courtyard in which their bodies would later lie.