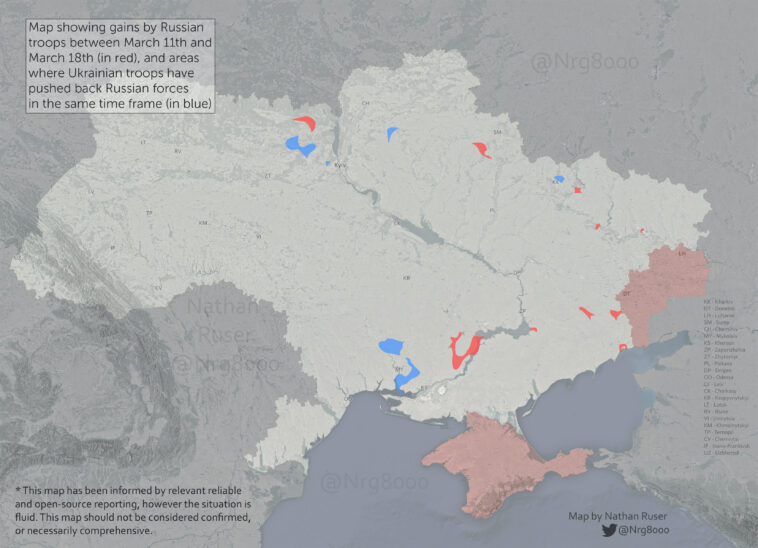 On the right bank, the Ukrainian Armed Forces threw back the Russian troops to the positions 70 kilometers away from Kyiv, said Deputy Chief of Staff of the Ground Forces Command of the Ukrainian Armed Forces Brigadier General Oleksandr Hruzevych. It rules out a possibility of artillery attacks on Kyiv, while missile threats remain. On the left bank, the Ukrainian troops stopped slight advance of the Russian forces. They also destroyed more than 100 saboteurs and 35 subversive groups.

Grave problems are facing the Russian army in Ukraine, said Austrian military expert Tom Cooper who analyzes the war in Ukraine. The Russian troops fail to advance on a majority of directions. In the South, the Ukrainian troops are on a solid counterattack. “There wasn’t that much going on on battlefields of Ukraine War yesterday,” the analyst wrote in a Facebook post. “in the Kyiv area there was only sporadic shelling and rocketing. (…) Further south-east, it turned out the Ukrainians have recovered the southern side of Izium, two-three days ago: the 144th motorized rifle division has attempted to capture the same, yesterday, but was ambushed and lost a number of vehicles (yes, ‘once again’)”.

“In the Luhansk area, the Russians are claiming to have captured Rubizhne: actually, they did reach the northern outskirts, before running out of steam: too few troops to run a bigger assault. For similar reasons, also the attacks on Sieveierodonetsk and Popasna remained unsuccessful.”

“In Mariupol, there is bitter house-to-house fighting in the western centre of the city. The only thing I’m sure by now is that, in the East, the 150th MRD suffered heavy losses and was stopped while advancing along the M14 highway in between the Kalmiusky District in the North, and Livoberezhnyi District in the south. Two days ago, the 810th Naval Infantry Brigade and Separatists (the author refers to Russia’s hybrid forces in the occupied parts of eastern Ukraine – edit.) have run that attack from West in direction of the Freedom Square, but were cut to pieces: word is the Separatists have lost another of their commanders: I just couldn’t find out his name. Of course, the city is all the time plastered by air strikes and artillery.”

“If there are really ‘news’, then from the battlefields in the south, and then the western bank of Dnipro, in the Mykolaiv area. (…) Since two days the 58th CAA (Russia’s Combined Arms Army –edit.) is on full withdrawal back to Kherson. Realising the Russians have no troops to launch an amphibious landing on Odessa, the Ukrainians brought in their 28th Mechanised Brigade and, pushing south from Mykolaiv, liberated Posad-Pokrovske on the M14 highway (that’s only some 40km outside Kherson),” the analyst said.

Putin will threaten West with nuclear weapons. President Vladimir Putin can be expected to brandish threats to use nuclear weapons against the West if stiff Ukrainian resistance to Russia’s invasion continues, according to a new assessment by the Pentagon’s Defense Intelligence Agency.

Russia continues to terrorize civilians. A U.S. citizen was killed in Russia’s attack on a bread line in Chernihiv, National Police reported Thursday. Later, advisor to the Interior Minister Anton Herashchenko released a picture of the victim’s ID. He was identified as James Whitney Hill, born on June 27, 1954 in Minnesota, the U.S. Hill taught English in a school in Chernihiv. His partner Iryna recently survived a stroke. “He was not going to leave Ira’s side in her condition,” his sister told CNN.

Who are Ukrainians? What is their identity, what is their political culture? In which way are they different from Russians? What is Ukrainian political tradition? — We continue our “Explaining Ukraine” podcast by sharing our analysis of the Russian invasion and Ukrainian resistance. Hosts: Volodymyr Yermolenko, analytics director at Internews Ukraine, and Tetyana Ogarkova, in charge of international outreach at the Ukraine Crisis Media Centre.Listen to the podcast.

Since the occupation of Donbas in 2014 multiple international organizations have been active in Ukraine. Their task was to help relieve the humanitarian crisis and facilitate dialogue between the Ukrainian and Russian sides. SMM OSCE and the Red Cross were major international actors that were expected to build effective logistics, procedures and connections ‘in the field’ to secure implementation of these goals. Ukraine’s efforts to restore justice by bringing Russia into court and prosecuting individual criminals were assisted by the International Court of Justice, Interpol and International Criminal Court. Ukraine has been in reasonably effective working contact with the UN’s specialized agencies, such as IOM, UNICEF and UNDP.

Yet, as the full-fledged war with Russia started on February 24, 2022, the majority of international organizations that are usually there for countries in distress appeared to be ineffective, unresponsive or absent. SMM OSCE ceased operations in Ukraine and left the country by March 6. The International Committee of the Red Cross repeatedly fails to provide timely responses on humanitarian corridors to its Ukrainian counterparts. UN’s diplomatic support, though unified, does not result in immediate help on the ground. Institutions of international justice were the most responsive to Ukraine’s appeals, but their decisions will have little effect on the severity of Russian aggression today. International organizations should be more inventive and proactive in responding to unprecedented violence against civilians in Ukraine.

Ihor Burakovsky, professor, Head of the Board at the Institute for Economic Research and Policy Consulting