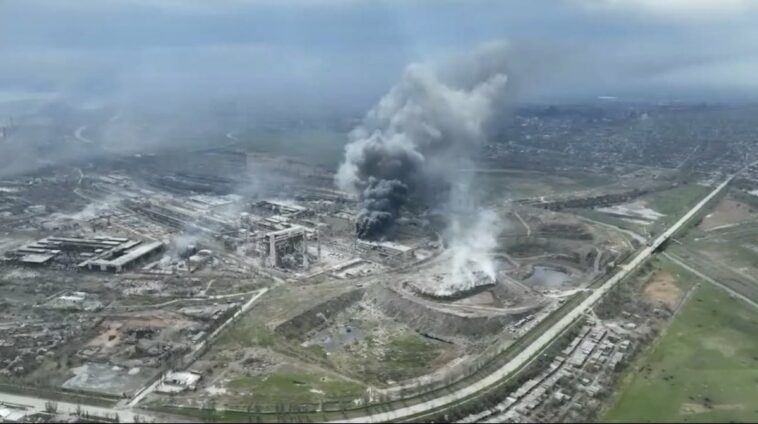 Azovstal bombed-out, completely destroyed. Mariupol’s Azovstal steel works “bombed-out and almost completely destroyed” as Russians dropped heavy bombs on it, deputy commander of the Azov regiment identifying himself by his call sign Kalyna told Radio Liberty. “Too many people” are left under the rubble, he added. Russia also dropped a heavy bomb on the plant’s hospital. It was empty, advisor to the mayor of Mariupol said. The area around the steel works is under heavy bombardment. Yet it has been empty for a long time, especially the hospital that was already in ruins.

The United States sees ongoing Russian activity in eastern Ukraine as a prelude to a much larger offensive in the country, a senior U.S. defense official told Reuters on Tuesday.

How can we describe Putinism? Is it closer to far-right totalitarianisms like fascism/Nazism, or to far-left system like Stalinism? What is the nature of Russian imperialism? Is Stalinism’s heritage still alive? Our “Explaining Ukraine” podcast. Hosts: Volodymyr Yermolenko, Ukrainian philosopher and journalist, chief editor at UkraineWorld.org, and Tetyana Ogarkova, Ukrainian scholar and journalist who is in charge of international outreach at the Ukraine Crisis Media Centre. Listen to the episode.

Ukraine in Flames #40. International isolation of Russia: what should be and what is already done

The world political community has begun the process of sanctioning Russia for its wrong-doing against Ukraine. In fact, a new model of political order is being created today, where Russia is given a place on the political and economic periphery of the world. One more important dimension of Russian isolation is diplomatic one, in particular participation of Russia in different international organizations. This is what we are going to talk about in Ukraine in Flames #40.

Valeriy Chaly, Ambassador of Ukraine to the United States (2014-2019), Chair of the UCMC Board