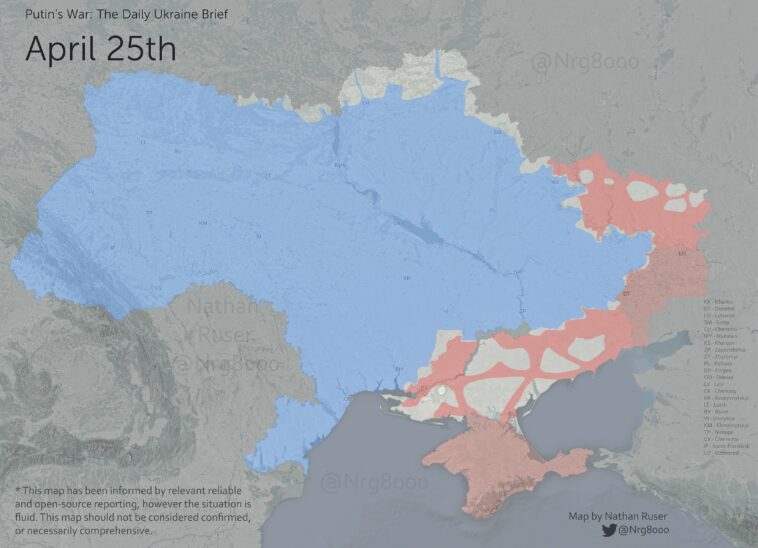 Fires in Russia’s Bryansk: pretext for Russia to declare military mobilization? On the night of April 25, two large fires erupted in Russia’s Bryansk. An oil depot Transneft-Durzhba caught fire, the Russian government said. A second fire was reported at a military base, media reports say.

Oil storage facilities went ablaze after suspected drone strikes by Ukraine, Russian media said. They gave no evidence to support their claim. “At about 2a.m., drone strikes hit oil storage facilities at Transneft-Druzhba oil depot and a military base in the city. One of the oil tanks caught fire. A bigger tank that can hold up to 20 thousand tons was empty as drones struck the facility,” Russian media Readovka said.

Ukraine did not comment on the incident. Earlier, General Staff of the Ukrainian Armed Forces warned of Russia’s provocations in Russia that would justify a decision to “continue a long exhausting war.”

“Two fires in the same area is not an accident,” military analyst Oleh Zhdanov told Radio Liberty. “Second, Ukraine does not have weapons to hit a target 170 kilometers away from the border,” Zhdanov said.

Russians can do that to declare martial law and draft more citizens to the military, the analyst proceeds.

On April 25, authorities in Bryansk said that the local terrorist threat level would be kept at yellow.

As little as one per cent of Ukrainians are not sure if their country will thwart Russia’s onslaught.

Two months have passed since Russia’s full-scale invasion of Ukraine. We’re drawing some key conclusions: failure of the Russia’s initial plans; Ukraine’s remarkable resistance; Russian army’s immense cruelty; changes of Russian discourse about the war; some forecasts about the future. We also analyze new trends in the Russian propaganda, and give you testimonies of the war witnesses. Hosts: Volodymyr Yermolenko, Ukrainian philosopher and journalist, chief editor at UkraineWorld.org, and Tetyana Ogarkova, Ukrainian scholar and journalist who is in charge of international outreach at the Ukraine Crisis Media Centre. Listen to the episode.

Ukraine in Flames #46. Why is Russia’s war against Ukraine not a “Ukrainian crisis”?

Wording about a war is part of a war itself. The Russo-Ukrainian war started eight years ago. Russia overtook Crimea and parts of the Donbas and Luhansk regions and installed pro-Russian governments on the occupied Ukrainian territories. Part of Russia’s justification to invade was to aid Russian-speaking Ukrainians in protecting themselves against the post-Euromaidan ‘junta’ or ‘failed state’. Russian propagandists facilitated any terms to avoid calling their invasion a war against Ukraine: civil war, armed conflict, humanitarian mission, special operation.

The international media often followed, failing to recognise the developments between Russia and Ukraine as a war. The popular wordings like “conflict in Ukraine” or “Ukrainian crisis” objectify Ukraine, put part of the blame for the war on Ukraine, question Ukraine’s sovereignty as an independent state, and deny tens of thousands of people legal recognition as victims of Russia’s war crimes. Past eight years, when the Russo-Ukrainian war is raging, the only just way to call war is war.

One can no longer sit at the grand chessboard and belittle the events that have already put the world in a crisis. Ukraine in Flames #46 illustrates why to call the ongoing war in Europe “a Ukrainian crisis” or “a conflict in Ukraine” is to cynically deny reality and  to support Russia’s narratives.

Ukraine in Flames #44. How effective are imposed economic sanctions against Russia?