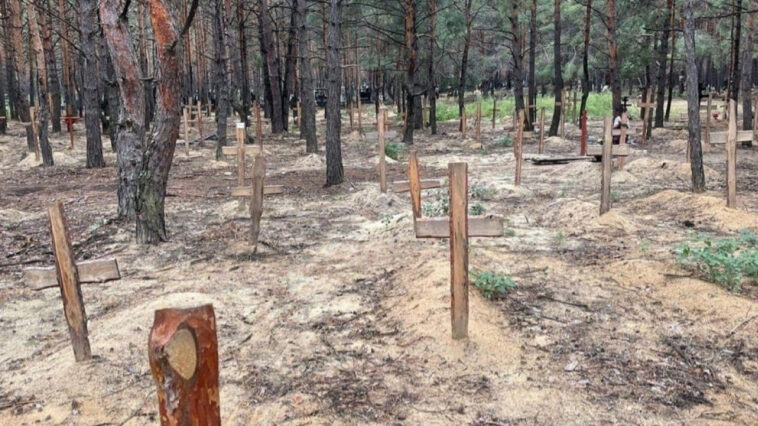 A mass grave was found in a forest strip on the territory of Izyum, Kharkiv region, liberated from the Russian military. This was reported by Oleg Kotenko, the Commissioner for Missing Persons.

More than 440 graves can be counted in the forest belt. Most of them have numbers on homemade wooden crosses. In addition to civilians, there are also Ukrainian military personnel buried there.

“And these graves are just numbers there. Some have surnames, some don’t, but most of them are numbers. When there was shelling, when they captured Izyum, they shelled the city very hard, and people died just in the streets. The funeral services did not know , what kind of people these are, but they took them and buried them in this cemetery,” -Kotenko said.

Today, September 16, the procedure for exhuming the bodies of the dead will be carried out. Sappers have already finished checking the area for safety.

In a comment to Radio Svoboda, the commissioner added that 20-25 people were buried in one of the graves, which had the inscription “17 people of the Armed Forces.”

We remind you that the Russian military left Izyum on September 10. This was confirmed by the Ministry of Defense of Ukraine and Russia.

Earlier, the deputy of the Izyum City Council Maksym Strelnyk reported that at least 1,000 civilians died in Izyum during the Russian occupation. In addition, more than 80% of the city’s infrastructure was destroyed.