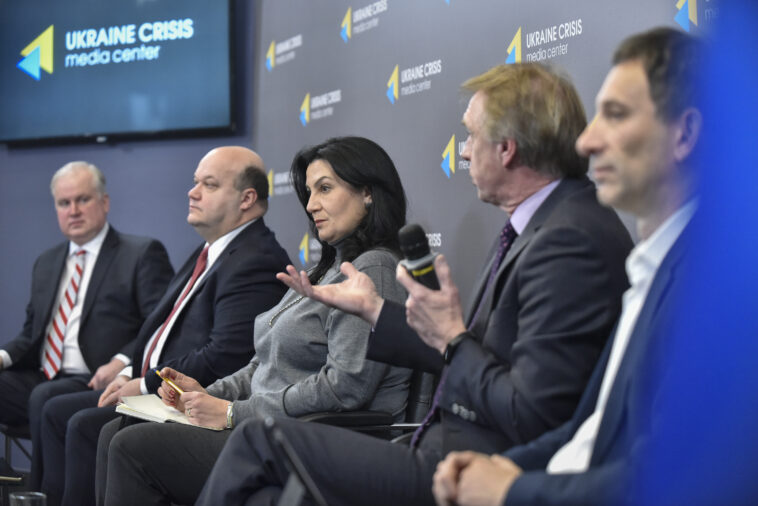 On January 14, at Ukraine Crisis Media Center, experts sat down for a discussion titled “Ukraine at the center of geopolitical standoff: Russia delivers ultimatum, the West reacts.” Ukrainian political analysts, politicians, and diplomats wrapped up a week of talks that followed Russia’s ultimatum to the West, and made projections for Ukraine in a debate organized by UCMC. These are the highlights of the discussion, read on.

Throughout this past week of talks, Russia deliberately “behaved like a hooligan and blackmailer delivering ultimatums”, said Ivanna Klympush-Tsintsadze, MP, Chair of the Parliamentary Committee on Integration of Ukraine to the EU as she opened the discussion. The West predictably rejected those demands, and did not assume the Kremlin’s tone in the talks, the MP added.

“I am not sure if those engagements can yield tangible results. Putin is led by an ambition to have his name written into history of the Russian Empire. He appreciates symbolism, and the year 2022 marks the 100th anniversary of the Soviet Union. The events in Belarus last year and the year before should be seen as part of Russia’s efforts to annex pieces of former Soviet Union. Recent developments in Kazakhstan and deployment of Russian-led CSTO troops there, and escalation around Ukraine all fit this pattern,” Klympush-Tsintsadze said. Russia’s actions could trigger World War Three, the lawmaker added.

While the West is conscious of that, preventive moves are scarce, the politician said. The Kremlin will only understand real actions, not a list of potential measures that are not applied.

Russia will not necessarily begin yet another round of aggression against Ukraine with a full-scale military invasion. It could be a massive blackout, a dam failure on the Dnipro river etc. The cyber attack on Ukraine’s government web sites on January 14 may well be part of a new round of Russia’s aggression.

The West has not drawn a clear line for unprecedented sanctions against Russia, Klympush-Tsintsadze said. That is seen as part of a global democratic recession, she added.

Russia’s scandalous conduct and ultimatums aimed to reach domestic audience, not the U.S. or NATO allies, said Danylo Lubkivsky, director of the Kyiv Security Forum, Deputy Minister of Foreign Affairs of Ukraine in 2014.

“Russia’s diplomatic conduct was to target domestic audience. In the first round, Putin’s system received dividends. Russia aimed to show that it can talk to the West in a scandalous manner. All eyes are now on the Russia-China relations, particularly on Putin’s visit to Beijing in February,” Lubkivsky said.

The U.S. President consolidated European allies. “There is an attempt to unite around new rhetoric on common values and goals. Putin helped the West to become one. Is the West ready for a marathon that the Kremlin forces on it?” he said.

Nord Stream 2 was not sanctioned, but there is room for optimism. Throughout its history, Ukraine has never had such strong support as it now has.

“Not yet a member of the EU and NATO, Ukraine is restored on the mental map of Europe. It is high time for Ukraine’s diplomacy. For now, these are sporadic activities. Real public diplomacy needs to succeed PR efforts and Twitter diplomacy. Ukraine’s President needs to take an active role and deliver on his promises to numerous voters,” Lubkivsky said.

On way to NATO, Ukraine to bolster capabilities to defend itself on its own

Russia stepped back threatened by personal sanctions against Putin, said Volodymyr Ohryzko, head of the Center for Russian Studies, Foreign Minister of Ukraine in 2007-2009.

“Scare tactics is how a mob would act. That line of conduct will stay as long as there is the quasi-empire. We need to get ready for that. As the West served a menu of sanctions to the Kremlin, they began to envision the consequences. Russia saw that the U.S. and NATO are prepared for all types of scenarios. The West wakes up to the Russian threat, and its response is taking shape,” Ohryzko said.

As Ukraine gave up its nuclear weapons under the Budapest Memorandum, it now needs to focus on acquiring conventional and guided weapons to bolster defense capabilities and contain foreign aggression.

“We need to rebuild our capabilities to contain the aggressor. We will never fight against the U.S. or Germany, I mean Russia in the first place. We are not a NATO member, so we have to be capable of protecting ourselves on our own,” Ohryzko said. Ukraine needs to lobby for defensive weapons from the Western allies, he added.

Valeriy Chaly, Chair of the UCMC Board, Ambassador Extraordinary and Plenipotentiary of Ukraine to the U.S. in 2015-2019 outlined three possible scenarios of Russia’s aggression.

In the most likely scenario, Russia will launch a hybrid attack forcing the Ukrainian government to make concessions. The scenario has a 73 per cent probability. Russia could launch cyber attacks on Ukraine’s infrastructure, create power outages and manipulate electricity supplies from Belarus, and halt gas transit. Determination of the Ukrainian leadership to compromise and achieve peace at any cost will lead to a domestic political crisis, the diplomat said. Russia could also deploy “peacekeepers” to Ukraine’s uncontrolled territories and stage further provocations there. Ukraine’s advance toward EU and NATO membership could be blocked for decades.

“The country’s leadership and some Ukrainians are being naïve about Putin’s resolve to make concessions for peace. That’s a very dangerous illusion,” Chaly said.

The weeks after the opening of the Winter Olympics in Beijing on February 4 will be decisive, the diplomat predicted. The Russian President is to attend the opening ceremony, and President Zelenskyi’s team is weighing prospects of a bilateral meeting with Putin during the Olympics, Chaly said referring to an anonymous source. Russia could stage a military attack while the President is away, that would weaken Ukraine’s position. The window of opportunity for Russia to destabilize Ukraine or launch an offensive will remain open until April. Between then and summer, escalation is unlikely.

If there are no dramatic developments until summer, the best solution could be the Membership Action Plan granted to Ukraine at the NATO summit in Madrid in late June 2022. If western leaders are reluctant to proceed in that direction, an equal option could be going ahead with a proposal by U.S. House Republicans to designate Ukraine a NATO Plus country, a U.S. ally alongside Australia, New Zealand, Japan, South Korea, and Israel. Ukraine would need to make sure that the status does not contradict the prospects of NATO membership.