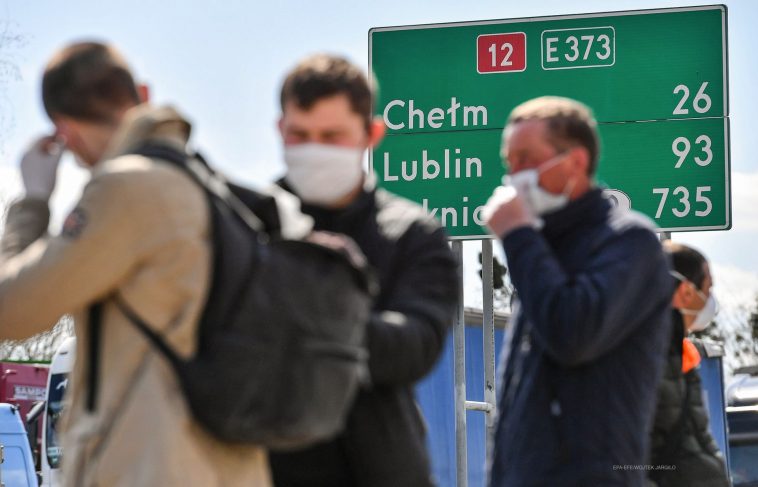 Russia-backed militants kept firing upon Ukraine’s Joint Forces positions in violation of the Minsk agreements. Attacks were recorded near Pavlopil and Starohnativka.

On April 28 in the area of responsibility of Ukraine’s operational-tactic command “Pivnich” (North), Russia’s proxies continuously violated the obligations under the Minsk agreements on heavy weapons withdrawal.

They also fired upon the Ukrainian troops’ positions near Krymske and Zaitseve.

Normandy Format talks: the online meeting of April 30 in a nutshell

Foreign Affairs Ministers of the Normandy Four states – Ukraine, Russia, Germany and France met for a video conference on April 30. It was expected that the meeting would give an impulse to the work of the Trilateral Contact Group in Minsk.

The Normandy Four summit did not happen. It is important to understand that even if the pandemic hadn’t started, the summit would not have happened anyway. Implementation of the Paris summit decisions has not progressed, all dimensions of the Trilateral Contact Group’s work are stuck, while the idea to restart the Group under the Russian scenario was turned down by the rest of the Normandy Four members.

No one expected that the recent Foreign Affairs ministers’ talks would become a breakthrough, but there are a few important outcomes to underline.

Proposal on establishing the Consultation Council has faded away, at least in the format agreed upon on March 11. A different format that would de facto exclude the direct talks between Ukraine and Russia’s puppets in Donbas, is something that has no interest to Russia. Russia was persistently pushing for the initial proposal of the Consultation Council, and blames the Normandy partners for derailing the agreements.

At the same time Ukraine claimed ready to talk to residents of the occupied territories. A recent proposal put forward by the civic council under Ukraine’s Foreign Affairs Ministry suggests that Ukraine forms its own Consultation Council to reinforce its delegation to the Trilateral Contact Group in Minsk. It can become an option. As per the Group’s actual format, Ukraine and Russia are its members, OSCE is a mediator and representatives of the occupied territories are invitees, nothing was changed here.

Security comes first. Until the security provisions are implemented, there are no grounds to get to the political discussion, as Russia would want it. According to Ukraine’s Foreign Affairs Minister Dmytro Kuleba, the meeting’s focus was on security and ceasefire. Trilateral Contact Group has to agree a new ceasefire date. Instead, Russia keeps insisting that the primary steps are to incorporate the “Steinmeir formula” and the Donbas’ special status in the domestic law. It may give an impulse to other dimensions of the talks, Lavrov said.

Humanitarian issues: no significant agreements made. Participants reached no agreements that would lift movement restrictions or open new control points across the contact line. The parties agreed to continue consultations to agree a new prisoner swap.

Land market: President signs the bill, Tymoshenko to appeal against it to the Constitutional Court

Last week the President of Ukraine Volodymyr Zelenskyi signed the land market bill, making it law. The bill’s full name is “On amending some Ukrainian legal acts with farmland circulation conditions”, it was passed by the Parliament on March 31, 2020.

To remind, the International Monetary Fund requested adoption of the law as a precondition for granting Ukraine financial assistance.

Ukrainian seasonal workers locked at home: what is it all about?

Ukrainians working abroad, mostly seasonal workers, have difficulty moving out of the country. Many of them worked a few months in the EU to be later able to maintain their families at home throughout the rest of the year. The coronavirus outbreak sealed the borders, but even as foreign employers claim ready to organize charter flights, Ukraine is blocking the solution. Here’s what the government, human rights organizations and economists say.

How it started? In early April Finland addressed Ukraine’s Foreign Affairs Ministry asking to help bring about 1.000 agricultural workers from Ukraine. Finnish authorities had committed to paying the charter flights and organizing a two-week quarantine for the seasonal workers.

Ukraine’s Foreign Affairs Minister Dmytro Kuleba said in mid-April that Ukraine is getting a lot of similar proposals from EU employers, while the final decision was not yet made. In late April it became clear that Ukrainian authorities are reluctant to let Ukrainians go to work abroad.

The only flight carrying 200 Ukrainians arrived in Finland, the Finnish authorities have little hope of more flights, following the statements made by the Ukrainian authorities.

Position of the government. “We want to try and keep the people in Ukraine, we’ll make each and every effort to achieve that. There are many jobs in Ukraine as well,” said Prime Minister Denys Shmyhal in an interview on April 22. “It now seems illogical to organize massive charter flights to bring Ukrainians to the countries that are also hit by the pandemic,” said Foreign Minister Dmytro Kuleba at a press briefing on April 28. The government keeps promoting the idea that Ukrainian migrant workers will not be able to go abroad in the nearest time, despite their own will and the demand by EU employers.

Legal aspect. Neither the Foreign Affairs Ministry, nor the Cabinet of Ministers have confirmed that there is an official document restricting the rights of Ukrainians to go to work abroad. Ukraine has limited air travel during the quarantine. So, each charter flight departing from the country would need a permission.

The permissions are issued by a working group in the government. Even though there is no formal ban on exit, Ukrainians have no chance to leave with charter flights organized by foreign employers, as the government issues them no permissions.

Later the government posted a notice on the official web site stating that ad-hoc permissions for Ukrainians to leave the country will be issued at the request of foreign employers, should they be able to provide due living, working and healthcare conditions.

What do foreign employers say? European farmers are worried: as the harvest season is nearing, there is a shortage of workers to gather the crops. Given the coronavirus pandemic, quarantine and closed borders, it is possible that seasonal workers, mostly from Eastern Europe, will not be able to come.

They say, authorities have no legal grounds for not letting Ukrainians go abroad. The move violates the Article 33 of the Constitution that guarantees the freedom of movement and the freedom to freely leave the territory of Ukraine.

Human rights defenders emphasize that everyone should have a possibility to decide on their own whether to go to work abroad, even during a pandemic. The only condition that the government can put forward is that it will not finance the eventual evacuation of those individuals.

Economic arguments. In 2019 Ukrainian migrant workers and the diaspora sent about USD 13 billion to Ukraine from abroad, as per the estimations of the National Bank, and about USD 16 billion, according to the World Bank. It makes for 10 per cent of Ukraine’s GDP.

In the view of significance of money transfers by Ukrainian migrant workers, Ukrainian authorities have to be flexible, economists insist. Instead of restricting movement of migrant workers, they need to find a way to guarantee safety of movement and employment for Ukrainians.

On May 3 the Ukrainian Film Academy handed out its annual “Golden Dzyga” awards. “My Thoughts Are Silent” by Antonio Lukić received the Best Picture award. The film received a special mention at the Karlovy Vary festival and had a very successful theatrical release at home. “My Thoughts Are Silent” scooped three more awards: Discovery of the Year and Best Screenplay, its leading actress Irma Vitovska won the Best Actress award.

“Golden Dzyga” for Best Director went to Nariman Aliev for “Homeward”. Aliev, of Crimean Tatar origin, through a very personal and artistically calibrated lens, delivers his take on peninsula’s annexation and the war with Russia in Donbas. The film premiered at the Cannes Film Festival in the “Un Certain Regard” program, Ukraine chose it to submit to the Oscars to contend for the Best Foreign Language Film Award. “Homeward” actor Akhtem Seitablayev also received the Best Actor award.

Mykyta Lyskov’s “Deep Love” animation that hit the Ukrainian festival circuit and was selected by the Annecy Festival to the competition, was chosen Best Animated Short Film.

“Heat Singers” by Nadia Parfan (now available on VOD platform Takflix) was awarded as Best Documentary. It world premiered at “Visions du Reel” and earned favorable critical acclaim as an outstanding auteur documentary piece. Full list of “Golden Dzyga” winners is available on the page of the Ukrainian Film Academy.

A total of 855 children and 2.387 healthcare providers were infected. Ukraine has conducted 134.592 PCR tests.

The number of home care patients is 8.669 including 703 children and 1.975 healthcare providers. Hospitalized were 3.662 patients including 152 children and 412 medics, 160 of them were connected to ventilators, including one child and 14 medics.