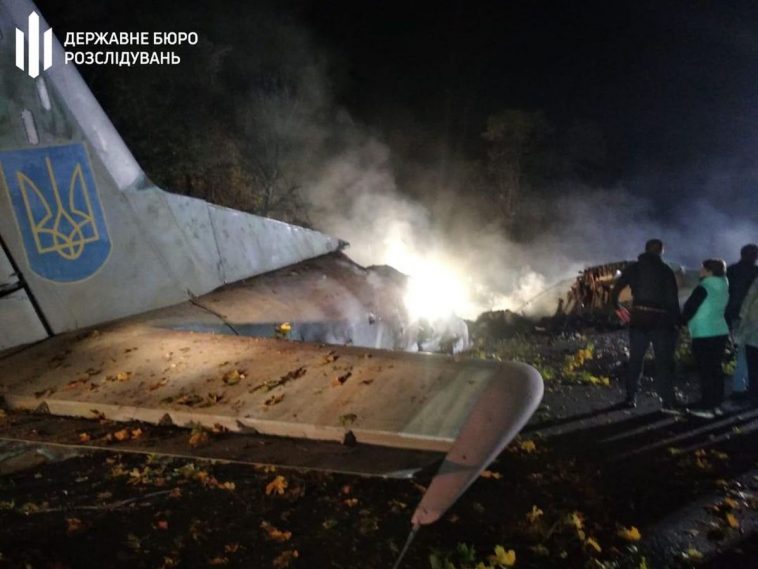 On September 23, Ukrainian troops recorded hostile unmanned aerial vehicles that crossed the contact line twice near Vodiane, thus violating the agreements made on July 22 by the Trilateral Contact Group.

On September 22, the Ukrainian Armed Forces command reported that Russia’s proxies kept denying entry into the territory beyond the government control to the monitors of the OSCE Special Monitoring Mission to Ukraine.

“Patrolling by the OSCE is also blocked by the occupants. Meanwhile, Ukraine’s Joint Forces command has ensured unimpeded access to OSCE patrols across the contact line,” the command’s statement reads.

Twenty-six killed in an An-26 military plane crash

On September 25, an An-26 military plane crashed in Chuhuyiv, Kharkiv region. The plane was carrying military pilots and cadets from the Ivan Kozhedub Kharkiv National University of Air Force.

The 27 people aboard were seven officers and 20 cadets. One more cadet was not let participate in the flight. Twenty-five bodies were recovered from the crash site. Initially, two cadets survived. One of them suffered burns on 90 per cent of his body, and died in a Kharkiv hospital on September 26. Nineteen cadets and seven officers were killed. The bodies were charred beyond recognition, so a DNA test would be required to identify the bodies. It will take up to two-three weeks.

The only survivor, cadet Viacheslav Zolochevskyi is at the Northern military medical center, he’s got numerous bruises and a concussion. His condition is stable, he injured his leg and has numerous bruises. He’ll be discharged from hospital soon.

What caused the plane crash? Immediately after the plane crashed, it was reported that the pilot was saying to the air traffic control that the left engine failed. However, the next day, the Defense Minister Andriy Taran told journalists that the main version of the crash is the malfunction of one of the aircraft’s sensors. It resulted in a wing-strike, causing the crash.

According to ProZorro, the An-26 aircraft that crashed, was produced in 1977. By October 1, its operational time would have been extended for two more years. The Air Force command confirmed that, adding that the plane was operable.

The Office of the Prosecutor General opened a criminal proceeding based on article 416 of the Criminal Code – violations during flights and preparations that caused a plane to crash, and resulted in severe consequences. The investigation into the plane crash will be carried out by the State Bureau of Investigation. The possible causes that they are currently considering include technical malfunction of the aircraft, improper performance by either the flight crew or air traffic control, and poor maintenance.

Local elections will be held in Ukraine on October 25, 2020. The upcoming elections are special as they are the first taking place after the decentralization reform started, granting local communities more resources and powers.

The overwhelming majority of voters (82 per cent) intend to vote in October’s local elections. Voter mobilization across the regions is high.

These are the findings of the national poll jointly held by the Ilko Kucheriv Democratic Initiatives Foundation and the sociological service of the Razumkov Center between August 14 and 19, 2020. Voters were polled across Ukraine but in Crimea and in the occupied territory of Donetsk and Luhansk regions. The pollsters also asked Ukrainians about their expectations of the elections, and the qualities they look for in the candidates.

Integrity is what over 55 per cent of the voters value most in candidates running for the office of mayor or town council head. The candidates need to demonstrate transparency of assets, a service record with no dark spots, offenses or acts of corruption committed. Second, scoring 48 per cent, comes the candidates’ successful experience of chairing the community, city or village. Third most important criterion (47 per cent) is a clear action plan that the candidate will uphold if elected to the office. Other important markers affecting the voters’ choice include the candidates’ promptness to maintain direct and consistent communication with voters (43 per cent), residency in the community (39 per cent), and the team of like-minders ready to step in after election (39 per cent).

Poisoning of Russian politician and anti-corruption activist Alexey Navalny, his evacuation to Germany for treatment and subsequent allegations that Kremlin used “Novichok” nerve agent in this attack became a subject of ongoing disinformation campaign.

Kremlin officials, pro-government experts and state-controlled media offer an array of explanations, more often than not contradictory. A suggestion that there was no poisoning at all and Navalny’s doctor assisted him in faking the symptoms, an argument that he was possibly poisoned but not with “Novichok”, a theory voiced by Putin that “Novichok” was indeed involved  and the activist has somehow ingested it himself – all of these claims represent a textbook example of Russian disinformation campaign.

On September 24, Drahoman Prize, a newly founded award for translators of Ukrainian literature was presented at Ukraine Crisis Media Center. The prize was jointly founded by the Ukrainian Institute, PEN Ukraine, and the Ukrainian Book Institute.

A translator can be nominated either by the awards committee, or by foreign cultural and diplomatic institutions, research centers, publishing houses, or artistic associations.

Submissions are open from September 24 to November 30. The application should include a digital and paper version of the nominated book, as well as an e-application form.

The winner of the Drahoman Prize 2020 will be announced during the award ceremony to take place in Kyiv in April 2021. Three finalists will be invited to attend the ceremony.

For more information on the Prize in English, follow the link.

The coronavirus pandemic has claimed over one million deaths globally. About 242 thousand new cases were recorded in the past day. India leads in the number of daily new coronavirus cases, followed by the U.S., Brazil, and France. Meanwhile, Argentina records close to nine thousand new daily infections, Russia and Colombia – over seven thousand.