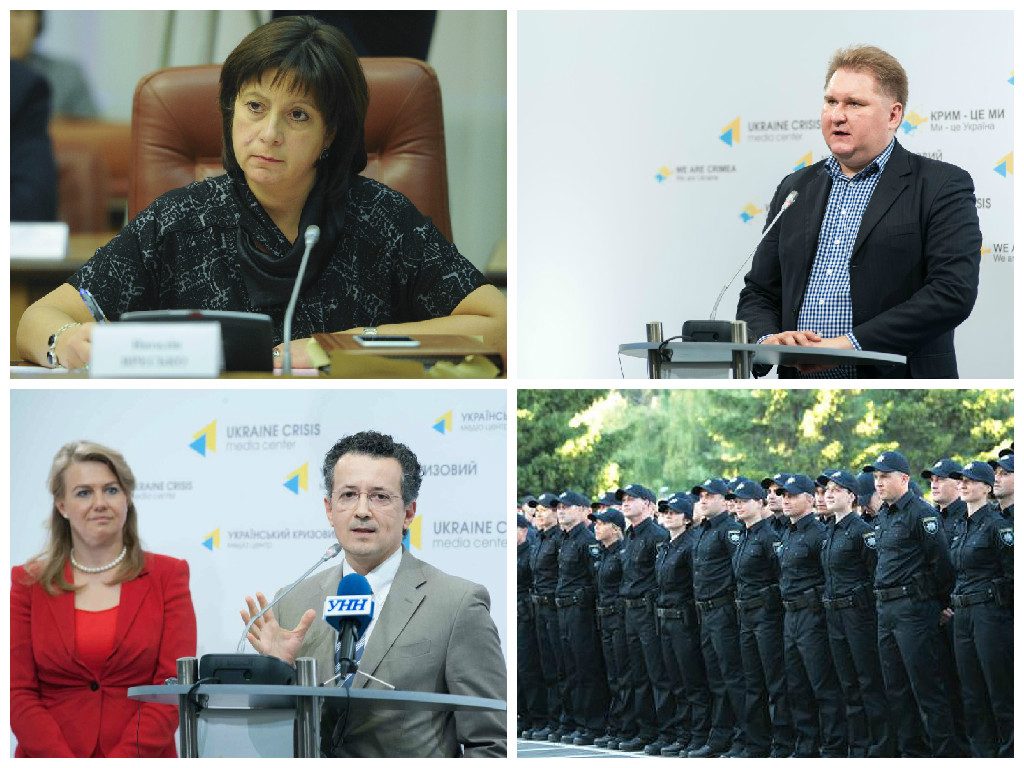 Macrofinancial stabilization. Ukraine reached agreement with the creditors committee on restructuring and partial debt relief. Thus USD 3,8 billion of debt out of the total USD 19,3 billion have been written off. The rest sum of USD 15,5 billion are due to be paid starting from 2019 until 2027. The coupons’ level is 7,75 percent, which constitutes only 0,55 percent more than the current level. By striking a deal, Ukraine has not only prevented default but has also restructured its debt on favorable conditions. Almost simultaneously the World Bank disbursed USD 500 million for reforms implementation in Ukraine as part of the financial support package that foresees disbursement of USD 2 billion to Ukraine throughout 2015. International Monetary Fund expressed its support to Ukraine as well. Support of international financial institutions sends a clear positive signal to investors.

The agreement reached on servicing the state debt enables Ukraine to continue implementing the policy for macrofinancial stabilization. The policy is aimed to achieve stability of state finances in mid- and long-term perspective. The agreement is especially timely given the preparations for 2016 state budget and the start of tax reform.

Apart from external factors, there are also internal ones that serve to Ukraine’s benefit. As of August 25, around 37 million tonnes of grain were milled – two tonnes more than last year’s figure – has drastically decreased the production index of the basic sectors due to increase of production volume in agricultural sector from 17,6 percent in June to 8,7 percent in July. The National Bank of Ukraine has cut the discount rate from 30% to 27% effective August 28. Taking into account the war in eastern Ukraine and the economic crisis, it is an unprecedented step that Ukraine’s National Bank has first made since August 2013.

Law enforcement reform. Successful experience of reforming patrol police in Kyiv was transferred to Odesa and Lviv. Four hundred policemen in Odesa and in Lviv were publicly sworn in last week. Requirements to the patrol policemen were similar to those in the Kyiv patrol police candidates. Twenty persons were competing for one post. Eighty percent of candidates have higher education with average age of 30. New police as to demonstrate the new quality of relations between the citizen and the state built on mutual respect, transparency and zero tolerance to corruption. Actual examples of the reform effectiveness will guarantee that the Law On National Police, which comes into force on November 7, is to be enforced across the country.

Higher Qualification Commission of Judges amended the procedure and methodology for qualification evaluation of judges on August 19, 2015 and sent the amendments to the Judicial Council of Ukraine. The above documents are basic for re-evaluation of Ukrainian judges.

Decentralization. Before the constitutional amendments on decentralization are voted in by the Verkhovna Rada, the initiators of reforms sent a clear signal on irrevocability of changes. The draft law On Prefects introduces an instrument for implementing constitutional amendments and technically marks a shift of management functions  the shift for central authorities from management to control and monitoring functions. The draft law was discussed and supported by the reforms taskforce. It is to be introduced to the Parliament for consideration in the nearest time.

Introduction of prefects should be regarded as a component of the civil service reform that should result in brand new approaches for selection of civil servants. The bill in question will only be able to effectively work if the new versions of the laws On Civil Service and Central Executive Bodies are adopted. These documents are already in the Parliament and have been recognized as priority ones for adoption. Their adoption is also important in the context of preparation of the 2016 state budget.

Meanwhile, financial decentralization introduced in 2014 has positive outcomes despite the concerns of skeptics. Property tax that is usually one of key sources for replenishment of local budgets in developed economies has started functioning in a similar way in Ukraine. Actual revenue to local budgets was twice more than planned: UAH 455,5 million against the UAH 226,6 million. In general increased financial capacity of communities is a corner stone of not only the decentralization reform but of the tax reform as well.

Government transparency. The increased openness and transparency remains among the key priorities of the government and demands of the wider society. In Ukraine, the National open data portal http://data.gov.ua started its work. Any citizen can offer disclosing a certain set of state information to make it public. The Cabinet will consider the relating requests at its monthly meetings and approve a list of data required for publication in a transparent manner.

During August 2015, all executive power central authorities have made proposals for datasets and registers to be opened first.  The Ministry of Infrastructure has published a working version of the procurement contract database on its official site. It includes enterprises that have been managed by the Ministry since the beginning of 2012 to the first quarter of 2015.

Deregulation. For the first time since its independence, Ukraine has determined oil and gas fields development rules.  The Ministry of Ecology and Natural Resources of Ukraine approved the corresponding order. These regulations are being approved in other ministries and will be registered at the Ministry of Justice of Ukraine in the nearest future.

The development of rules shows the investors that the state is ready to set up civilized relationships built on the existence of clear rules common to all market participants. Lack of such approaches frightened away investors, and did not promote the development of competition.

Agriculture reform. Good harvests create positive trends in the economics. Agricultural development requires a long-term strategy for all stakeholders on the market including the state. The Ministry of Agriculture has developed a strategy that covers not only legislative measures but also lays fiscal policy priorities in the field of agriculture, organizational and other administrative measures.