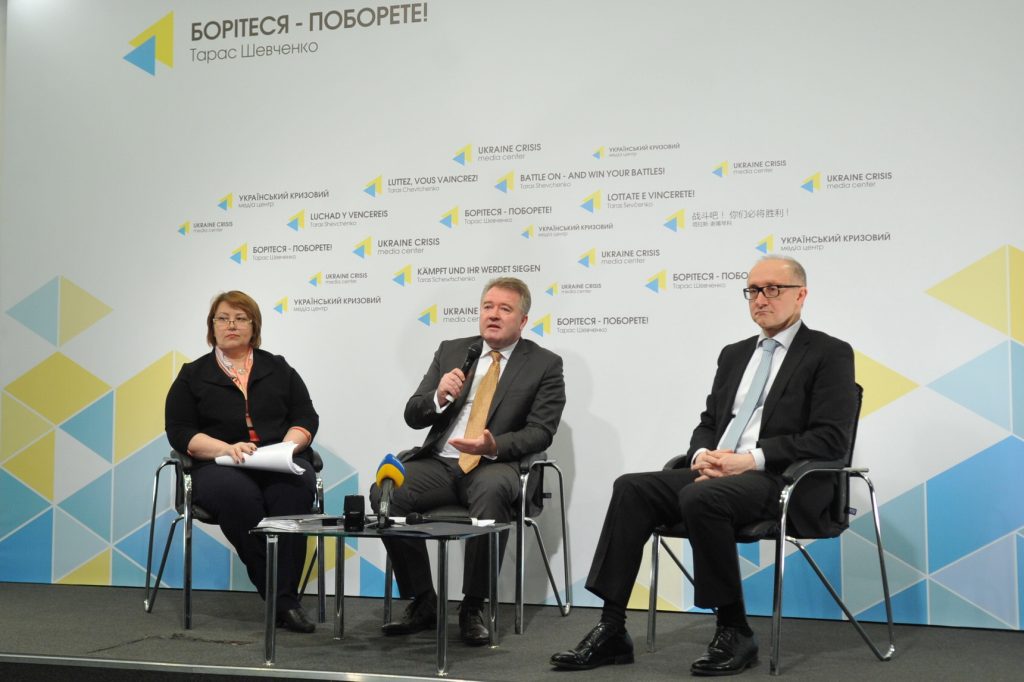 Kyiv, March 25, 2016. The High Council of Justice, the Council of Judges of Ukraine and the High Qualification Commission of Judges of Ukraine have announced a new format of their activities. “We have started coordination activities among these authorities in order to coordinate their steps and to ensure faster cleansing of the judiciary. […] I hope that with the adoption of amendments to the Constitution of Ukraine, we can implement this format in legislation and it will proceed on a legal basis,” said Igor Benedysyuk, Head of the High Council of Justice, at a press briefing at Ukraine Crisis Media Center.

Representatives of the judiciary noted that though changes within the judiciary are actually slower than society expects, there are first positive changes already. In particular, the Council of Judges adopted several key regulations – “On the evaluation of judges” and “Regulation on monitoring compliance with the law on conflict of interests in the activities of the courts.” “This regulation concerns observance of anti-corruption legislation by judges, the issues of regulating conflict of interest by the Council of Judges, adopting recommendations for judges to eliminate conflicts of interest and prevent real or potential conflicts of interest,”  explained Valentyna Simonenko, Head of the Council of Judges of Ukraine. In addition, in the framework of the strategy for developing the judiciary, approved by the Council of Judges, this year will be devoted to supervising courts’ activities. The first checks, Ms. Simonenko said, began in 2015 (in Dnipropetrovsk, Kherson, and Odesa). The Council of Judges has adopted a system of evaluation of judges and is finishing the development of a methodology to involve the public in this process – people will be able to complete a questionnaire posted on the court website and to evaluate the quality and motivation of rulings.

Currently, said Ms. Simonenko, a competency test has been completed for judges. “Almost all the judges wrote applications to undergo a test. 97% of judges have passed this test and received a positive conclusion,” she reported. Ms. Simonenko noted that in some courts the process had slowed so the Council of Judges on the recommendation of the Ministry of Justice has sent a recommendation to the expiration of such inspections. “Soon we will have the final figures of judges’ tests,” assured Ms. Simonenko.

On March 31 evaluations of the first 100 judges initiated by the High Qualification Commission in accordance with the law “On the right to a fair trial” are supposed to finish. “We started with the primary evaluation, which will concern all judges in the country. This order will be applied, probably, for the first time in the world,” said Sergiy Koziakov, Head of the High Qualification Commission of Judges of Ukraine. The procedure involves two stages: the first – anonymous test on the established legal positions of the Supreme Court Ukraine and the European Court of Human Rights and practical tasks which imply the Commission’s further questions; the second – discussion of the findings of the judicial dossier. “The evaluation is based on three regulations which were agreed with the Council of Judges. These are serious and high-quality documents,” assured Mr. Koziakov. The first wave was supposed to include 100 judges whose 5-year term had just ended, they were divided into 5 groups. Of the first 80 judges who had to undergo evaluation in the first wave, 73 came for the evaluation. 10 of them failed and were sent for retraining to the National School of Judges. With respect to another 11, a break was announced – to find out information on their property ownership or professional record (modified, cancelled decisions and so on), all the rest have passed evaluation and can continue to work. He added that the entire process is broadcast live, so anybody who wants to can watch the evaluation procedure.

The High Council of Justice (HCJ), on its part, considers citizens’ complaints against the actions of judges – currently there are about 9000 complaints; half of them came at the time when the HCJ had not worked – until June 2015. Half of this array of complaints have been considered, about 2 thousand complaints have been upheld. “Over this period, the decision has been made on dismissal of about 330 judges for special discrediting circumstances. The lion’s share of them were dismissed for violation of oath, in particular,  judges from Crimea, from Donetsk and Luhansk who had remained to work with the occupation regime,” – noted Igor Benedysyuk. Some of these dismissals – dismissals for violation of oath have been filed by the Interim Special Commission (ISC). The HCJ has considered almost 90% of them. Now the ISC begins to file unconsidered complaints. Currently 13 proceedings filed by the Ministry of Justice are pending in court. One judge (Tatko Viktor Ivanovych, a former head of the Supreme Economic Court) has been dismissed. By the way, the decision on his dismissal is appealed like most of the decisions that we have made against judges. They are currently under consideration of the Supreme Administrative Court. Some of them have been appealed in the Supreme Court,” noted Mr. Benedysyuk. 520 judges dismissed on general grounds, 395 resigned, 92 quit. The HCJ suspended proceedings as to 101 cases and addressed a request to the High Qualification Commission to check whether there were any grounds to dismiss these judges for special (discrediting) circumstances. “Unfortunately, not all our decisions have been implemented – in particular – that on the dismissal of judges by the Verkhovna Rada. Only six judges have been dismissed by sentence and a few have resigned or quit voluntarily,” informed Igor Benedysyuk. The High Qualifications Commission received 10 thousand complaints, however, stressed Sergiy Koziakov, almost 90% of them “are petitions of appeal and cassational appeals just named differently rather than disciplinary complaints within the scope of our authority. That is why we have to reject them.” Ms. Simonenko and Mr. Koziakov noted that the judicial system in cooperation with NGOs are planning to develop a special information campaign – “to explain people how to complain about judges, where to go and how to formulate complaints.”

Representatives of all  three institutions stressed that now it is expected that the parliament will make a decision on appointment or dismissal of 600 judges. The delay in this decision leads to the fact that in some courts “there are no judges who could do justice,” said Igor Benedysyuk. For this reason, said Sergiy Koziakov, head of the High Qualification Commission of Judges of Ukraine, the work of Brusyliv District Court of Zhytomyr region and Magdalinivsky District Court of Dnipropetrovsk region has almost stopped; besides, some more district courts of Ukraine are on the verge of stopping. Currently, these vacant positions have been taken by judges transferred from Luhansk and Donetsk regions who remained faithful to the oath and went to the territory controlled by the Government of Ukraine. “Neither the Council of Judges nor the Qualification Commission nor the High Council of Justice can settle this problem by themselves,” underlined Valentyna Simonenko, stressing that all appeals – including a joint letter sent last week yielded no results. “We lay our hopes on amendments to the Constitution that will empower the Supreme Council of Justice to unilaterally decide on such dismissals. We believe that then this process will be cleaner,” noted Igor Benedysyuk.