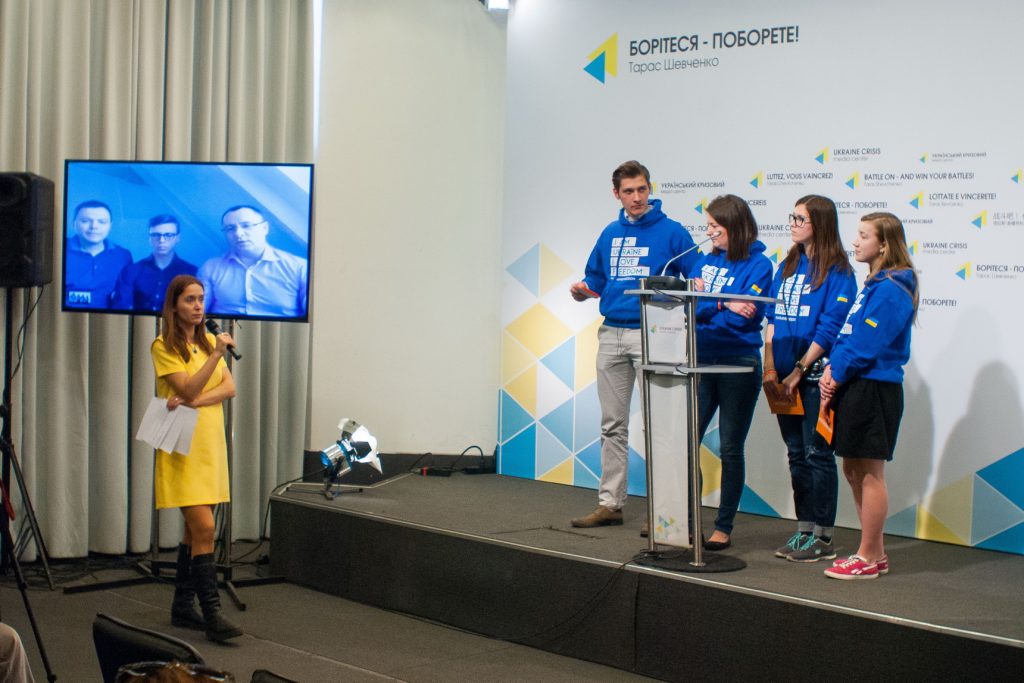 Kyiv, April 6, 2016. “As per the latest information the voter turnout forecast [at the referendum – UCMC edit.] is between 28 – 31 percent. Thus uncertainty stands,” said MP Svitlana Zalishchuk speaking via Skype from the Hague at a press briefing at Ukraine Crisis Media Center. Biggest media outlets and polling companies have agreed not to render public the voter turnout progress on the voting day. At the same time municipalities are publicizing the data, thus the parties will be able to count approximate figures pertaining to the voter turnout and to the result itself, she explained. Whether the voter turnout reaches 30 percent will be clear after 21:00 (22:00 Kyiv time) when the polling stations close. Right after exit poll results will be made public.

According to Svitlana Zalishchuk, if the turnout reaches 30 percent – it is more likely that “no” votes will outnumber the “yes” but the gap will not be big. Local media published possible scenarios. First of all it is obvious that the referendum is of consultative nature, its results are not mandatory for implementation. Thus the government will have to send the issue back to the Parliament and hold a discussion on further parliamentary decision. “It is quite likely that if the gap is not too big, say 52 per 48 percent, the government will be able to keep its previous decision and leave the agreement ratified legitimately enough,” said MP Zalishchuk. “At the same time if the gap is big majority of the political forces, as they said, will not be able to ignore the choice of their voters. In this case it will definitely be a precedent.”

The MP explained that there are no previous examples that one may refer to as to conducting of referenda in the EU. It is thus possible that the Prime Minister of the Netherlands will consult the EU bodies on how to resolve the situation. MP Svitlana Zalishchuk reminded that the Association Agreement has mixed jurisdiction: 85 percent is in the EU jurisdiction and all provisions pertinent to the Free Trade Area will continue working. At the same time 15 percent of jurisdiction is defined by bilateral relations between Ukraine and EU member states. Political decision will need to be adapted to these 15 percent defining how to further deal with it.

“We are telling to the people of the Netherlands that the Agreement is first of all signed with the people of Ukraine and with Ukraine as a state but not with any individuals. Thanks to the implementation of the agreement we reinforce Ukraine’s civil society and independent media that are instruments for combatting corruption, for identifying corruption,” said Vasyl Myroshnychenko, head of Ukraine Crisis Media Center office in the Netherlands. He noted that in the light of the Panama Papers scandal, the theme was mentioned in the debates. However he is convinced that it is a good outcome as independent media will be able to openly speak about it. Nevertheless in the perception of many Dutch people it may be reinforcing their previous impressions about Ukraine and about corruption in particular. Anti-European moods are also present. They are spread all over the EU. Myroshnychenko says anti-European moods get even stronger as more and more refugees arrive to the EU from Syria and Iraq. The Brussels attacks also played their role. “Ukraine is perceived through the prism of war,” he says. The Dutch people are aware of the big number of internally displaced persons and the ‘no’ camp is afraid that all the displaced will come to them. “Here the fears are manipulated,” says head of Ukraine Crisis Media Center in the Netherlands. “These fears and myths that have been brought to a new level were impeding us. We have neutralized them to the maximum extent possible,” he adds.

One of the most efficient Ukrainian projects of civil society in the Netherlands became the “Hop, Nederland, Hop!” campaign. The campaign includes videos by talented Ukrainian children who perform, sing calling on the Netherlands to vote for Ukraine. Gennadiy Kurochka, co-founder and member of the Board, Ukraine Crisis Media Center and the brain behind the project noted that one of the leading Dutch newspapers published a positive one page long article about Ukrainian children. “In the context that Ukraine’s children and the children of EU’s future,” he said. Kurochka noted that there were fears that opponents might say that children were used for campaigning. “We were surprised to have not heard anyone saying that the children came to support campaigning. Me have only precious positive emotions,” Kurochka says. It is important because the video got over 2,5 million views on YouTube, 85 percent of which are residents of the Netherlands. Such emotional message can influence the result of the referendum on Ukraine.

Students of the Ukrainian Academy of Leadership were talking to people in the streets, on trains and other public places in the Netherlands. Khrystyna Shabat, volunteer of the Ukrainian Academy of Leadership said that 50 students went to the country in the framework of the Ukraine Freedom campaign. “We put a goal for ourselves – to get five thousand friends in five days during which we will be in the Netherlands,” said Shabat. Participants of the initiative were talking to the Dutch people and telling them about Ukraine. They were making selfies with respective campaign flyers. The plan was overdone by more than two times, the volunteer emphasized. She said campaigning in the trains was an innovation, it was a successful step. “We started telling the people in the train cars about the referendum on Ukraine. It sometimes happened that people in the cars started applauding. One of the groups of eight decided that it is going to spend all five days in the Dutch trains,” the student said.

Petro Kocherhan, volunteer of the Ukrainian Academy of Leadership from Lviv thinks emotions are an important argument. “We were talking emotions, we were saying what we believed in. We are not big experts in economy, law, international law […]. But we told them about our experience, about what we lived through, and that Maidan started because of it,” the volunteer emphasized. Ukrainian students found points in common, common values such as the rights, freedoms and independence, added Ivanna Hrebenyak, volunteer of the Ukrainian Academy of Leadership from Ternopil.