Designated area for disengagement of troops in Stanytsia Luhanska was attacked twice by the militants over the last day. Luhansk sector stands as second hottest after the longstanding hotspot – Mariupol sector.

The area of combat actions in the Luhansk sector has considerably expanded. Russia-backed militants fired twice yet again upon the area of potential disengagement of troops and equipment in Stanytsia Luhanska, said Colonel Andriy Lysenko, spokesman of the Ministry of Defense of Ukraine on ATO-related issues at a press-briefing at Ukraine Crisis Media Center. In the second half of the day a series of incidents of fire exchange took place in Zhovte and lasted four hours with interruptions. “Massive attacks are also taking place outside Popasna. One of them included the use of mortars when militants fired 20 mines upon Ukrainian positions,” added Colonel Lysenko. In the Luhansk sector hostile troops made a total of 14 attacks, one of them included the use of heavy weapons. 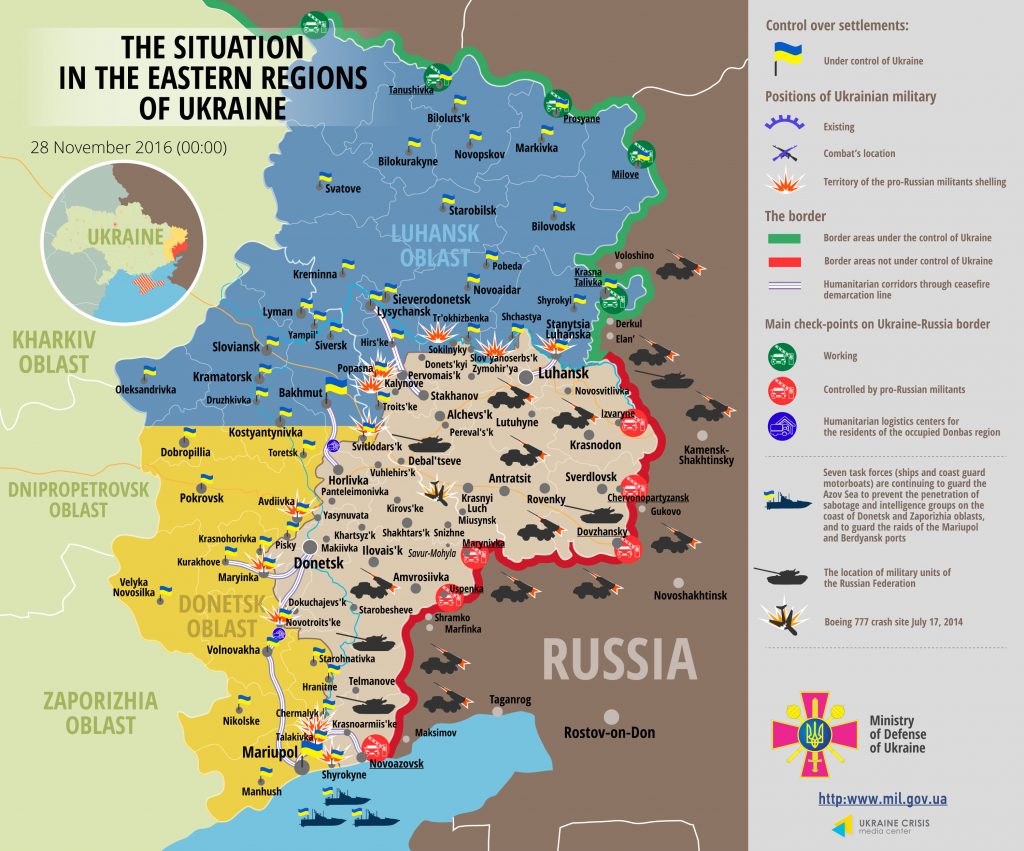 In the Donetsk sector combat actions were on in two areas: in Luhanske and in Avdiivka industrial zone. Shortest attack lasted thirty minutes, rest of the attacks lasted an hour and longer. In addition to light weapons combined Russian-militant troops used infantry fighting vehicles and mortars. “Twenty six mines were fired upon Ukrainian positions in Avdiivka,” noted the spokesman. Militants made a total of five attacks in the Donetsk sector yesterday and one of the attacks included use of heavy weapons.

In the Mariupol sector ceasefire was violated in Maryinka, Novotroyitske and in the areas close to the Sea of Azov. Yesterday militants used heavy weapons twice in Talakivka including mortars and tube artillery. “In Novotroyitske and Shyrokyne hostile snipers were active,” emphasized Colonel Lysenko. Over the last day militants made a total of 18 attacks in the Mariupol sector.

Ukrainian troops incurred no lethal casualties over the last day, six servicemen were wounded in action.

Report on the military developments in East Ukraine as of November 27, 2016 is available here. Interactive map of conflict is here and chronology of shelling is here.