The situation is traditionally the most restless– Pavlopil-Shyrokyne area and in Avdiivka, hostilities also continue in the vicinity of Svitlodarsk.

Luhanske remains the main flashpoint in the Donetsk sector, where hostilities continued for 12 hours with interruptions yesterday. “Enemy is widely using heavy weapons: about 300 mortar shells an 39 artillery shells were launched at our positions,” informed the spokesman of the Ministry of Defense of Ukraine on ATO related issues Colonel Oleksandr Motuzyanyk at a press briefing at Ukraine Crisis Media Center. Moreover, the situation is restless in Avdiivka. Two intense firefights between Ukrainian troops and militants lasted almost five hours. “A private house has been damaged in hostile shelling and household outbuildings ruined. There were no human casualties. Russia-backed militants violated the ceasefire in Novhorodske, Kruta Balka and Butovka coal mine position,” said the spokesman. According to him, main hostilities in the Luhansk sector took place in Stanytsia Luhanska. Militants’ attacks continued over three hours. 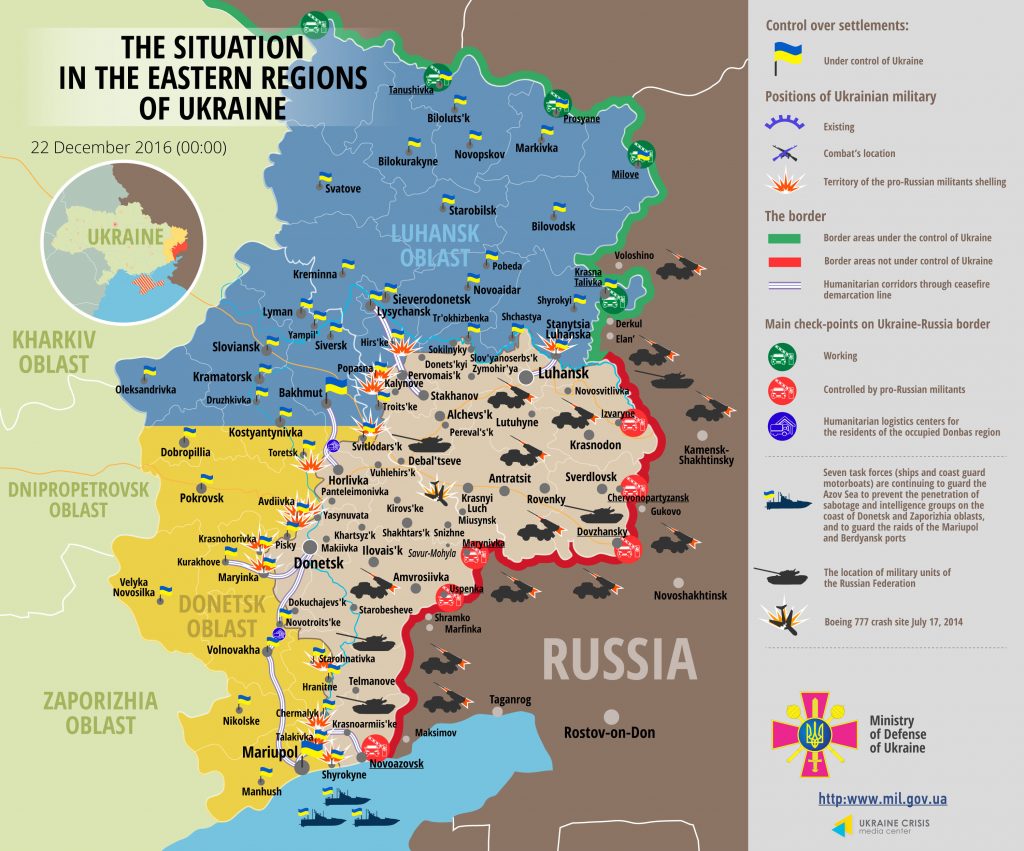 Moreover, Russia-backed militants violated the armistice on the Bakhmut road in Orikhove and Popasna district. Militants’ mortar attacks took place in Krasnohorivka and Pavlopil in the Mariupol sector, and artillery attack was instigated in Novohryhorivka. “It happened in the evening and after the sunset. In general, the situation is traditionally the most restless in the coastal area – Pavlopil-Shyrokyne,” added Col. Motuzyanyk.

According to the spokesperson, Ukrainian Armed Forces incurred no losses in combat yesterday. 11 troops were wounded at the Svitlodarsk bulge as a result of militants’ attacks.

Report on the military developments as of December 21 is available here. Interactive data on the shelling: chronology shelling chart and the interactive map.