Low and medium intensity combat activity continues in the Donetsk sector. There were brief incidents of mortar fire along the entire frontline in this sector. Shooting attacks in Avdiivka and the vicinities do not continue 24/7, but militants use heavy armor almost during each episode. “In some cases Avdiivka residential quarters came under the occupants’ fire. For instance, at least five tank projectiles hit multi-storey buildings in the southern brink of the town in the afternoon. Six more private houses were ruined in hostile mortar attacks. The town was cut off power supply again as a result of the occupants’ criminal actions, when a projectile hit a power supply line. Mobile service is periodically failing. We managed to prevent civilian casualties,” said the spokesman of the Ministry of Defense of Ukraine on ATO related issues Colonel Oleksandr Motuzyanyk at a press briefing at Ukraine Crisis Media Center. 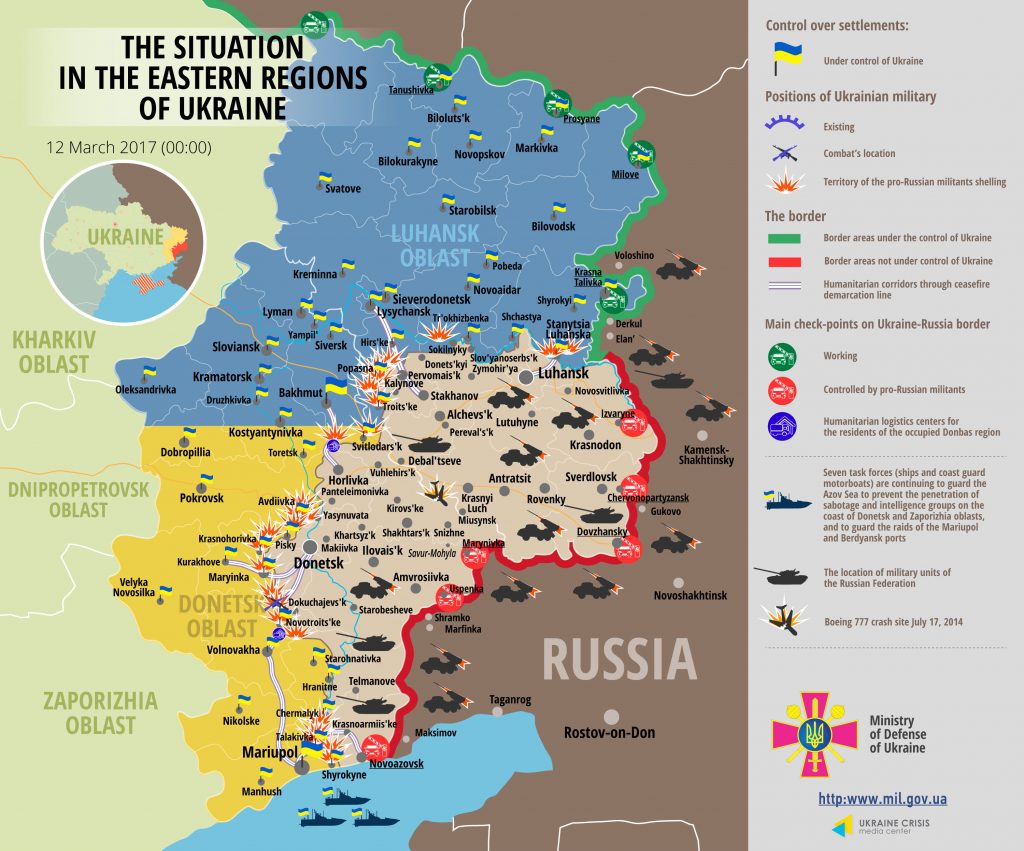 According to Col. Motuzyanyk, in the vicinity of the Svitlodarsk bulge militants shelled Luhanske three times in one day, periodically using APC weapons. The situation was restless only in Zaitseve near the temporarily occupied Horlivka. Russian proxies conducted a brief mortar attack during the day here and instigated several provocations involving use of light weapons. In total, militants conducted 22 attacks in the Donetsk sector, using heavy armor 13 times.

Russia-backed militants conducted five might mortar attacks in the vicinity of Popasna in the Luhansk sector. “Ukrainian Armed Forces’ positions in Katerynivka, Novooleksandrivka and Popasna itself came under hostile fire. The attacks originated from the side of Pervomaisk, and 120-mm mortars were mostly used,” said the spokesman. Insurgents conducted medium intensity mortar attack in Krymske in the morning. It lasted 30 minutes. In total, 11 hostile attacks took place in the Luhansk sector in 24 hours. Six of them involved use of heavy armor.

The situation was the most restless in the Mariupol sector. Militants were active in northern part of the sector – in Krasnohorivka-Mykolaivka frontline sector. Insurgents opened fire from light weapons in various parts of the sectors. They also shelled Mykolaivka from 122-mm artillery and used mortars to attack Slavne. Mariinka was shelled from mortar launchers, tanks and APCs at dawn. Russian proxies conducted one more artillery attack at Mykolaivka. They also shelled Berezove and Krasnohorivka from mortar launchers. “Hostile subversive reconnaissance group consisting of four militants advanced to our positions in Berezove west of Dokuchaevsk. Our troops noticed the group advancement and opened fire for effect. Following a 30 minutes attack, the enemy retreated,” said Col. Motuzyanyk. In the south line of defense militants opened mortar fire at Ukrainian Armed Forces’ positions in Pavlopil, Hnutove, Vodiane and Shyrokyne. In total, 40 militants’ attacks took place in the Mariupol sector yesterday, and 11 of them involved use of heavy armor.

Two Ukrainian troops died in combat in the Mariupol sector. One more soldier was wounded in the vicinity of Avdiivka. A 12-year old boy died in Vuhledar as a result of injuries sustained from a grenade explosion. “The inquisitive boy took this war toy for a lighter and pulled a pin to see the flame. The ordnance blasted in his hands,” said Col. Motuzyanyk.

Report on the military developments as of March 11 is available here. Interactive data on the shelling: chronology shelling chart and the interactive map.