The situation further escalated in the ATO zone, resulting in two Ukrainian servicemen killed and 11 wounded in action yesterday. “According to the General Staff estimates, pro-Russian militants fired at ATO troops around 900 mortar rounds, more than 130 artillery projectiles, 25 tank projectiles and a fourth of GRAD MRLS ammunition load. More than a half of all hostile mortar and artillery attacks took place along the Bakhmut road,” informed Ukrainian Ministry of Defense spokesman on ATO Colonel Oleksandr Motuzyanyk at a press briefing at Ukraine Crisis Media Center. 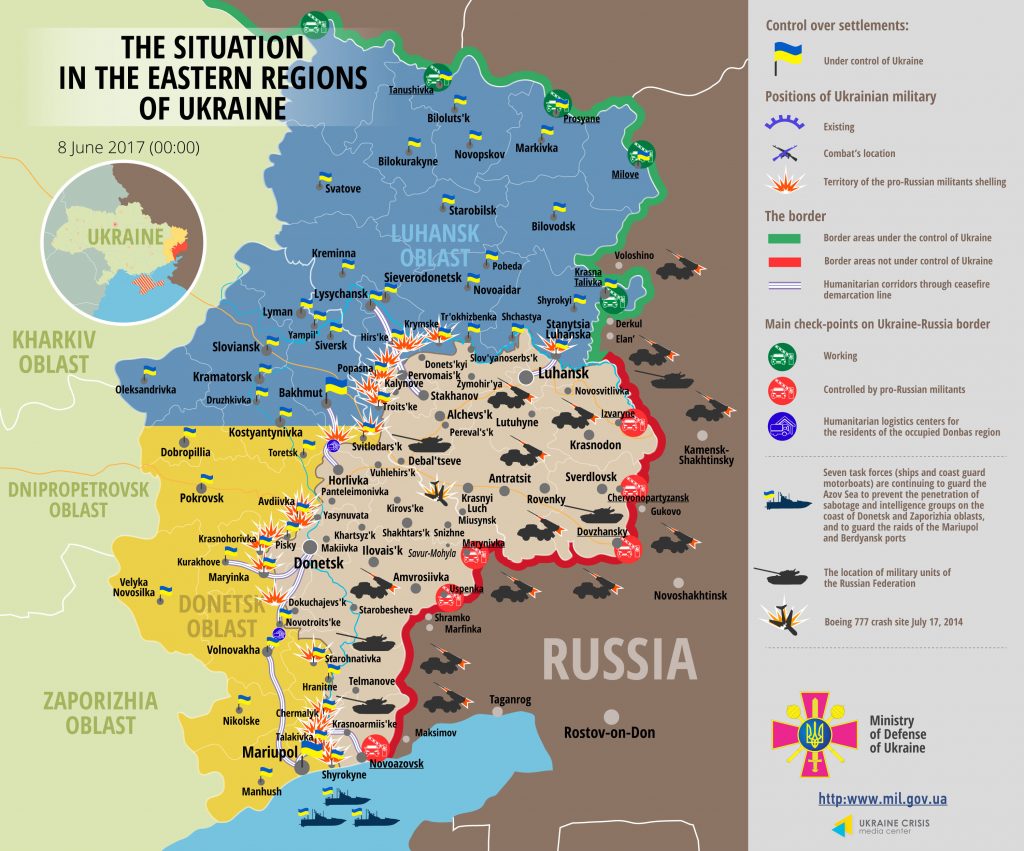 In Luhansk sector the day started with armed provocations in Stanytsia Luhanska and near Popasna. In five hours hostilities moved to the frontline Krymske-Zholobok-Novotoshkivske along the Bakhmut road.

“The enemy attacked our positions with all available heavy weapons except for rocket artillery for 15 hours almost non-stop. We know that the enemy deployed heavy cannons near Donetskyi and Sentiakhivka villages,” said Col. Motuzyanyk. In total, Russia-backed militants violated the ceasefire 23 times in this sector, using heavy weapons in almost every attack.

In Donetsk sector militants were shelling Ukrainian positions along the entire frontline from Svitlodarsk area to Nevelske. Russian proxies employed cannons near Avdiivka before the sunrise, and continued attacking with mortars during the day. “Each episode continued for at least one hour. Militants actively used small arms and armor. In total, 20 hostile attacks were recorded in the sector, militants used heavy weapons in 13 incidents,” added the spokesman.

In Mariupol sector main hostilities were concentrated in Maryinka district and near Chermalyk yesterday. Militants fired from various grenade launchers and sniper weapons in Maryinka. Three mortar attacks took place in Krasnohorivka in the evening. One of these attacks hit residential quarters of the town. “The enemy continued using mortars in Chermalyk, and launched 10 rockets from Grad MRLS in the afternoon. Militants were actively attacking our positions in Pavlopil-Shyrokyne frontline with small arms and grenade launchers during the day. On average, each attack lasted up to 30 minutes,” said Col. Motuzyanyk. In total, militants attacked 28 times in Mariupol sector yesterday, and used heavy weapons in every fourth incident.

Report on the military developments as of June 7 is available here. Interactive data on the shelling: chronology shelling chart and the interactive map.