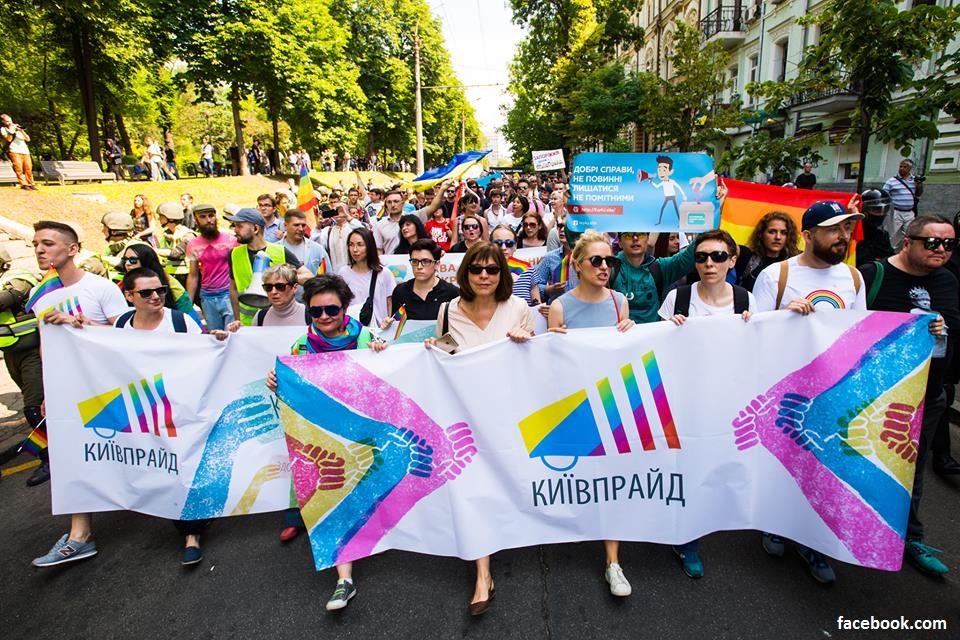 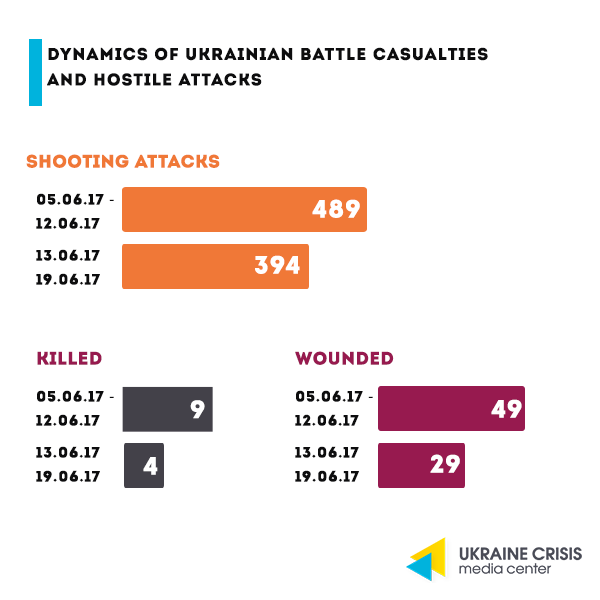 In addition to the above casualties count, one Ukrainian serviceman died in hospital June 16, 2016 of wounds received in action.

Situation in the combat zone. Combat actions do not stop in eastern Ukraine. According to the Ministry of Defense 2,696 Ukrainian troops have been killed and 9,903 have been wounded in eastern Ukraine as of June 16, 2017 since the beginning of the war.

750,000 children may lose access to drinking water in Donbas. It was stated by Afshan Khan, UNICEF’s Regional Director for Europe and Central Asia. The news says that the recent escalation of the armed conflict led to severe damage of the critically important objects of the water supply infrastructure. 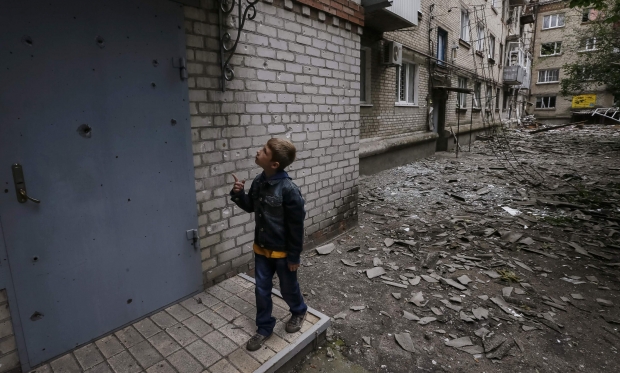 Constant water supply problems. The Donetsk water filtration station has come under fire at least nine times this year that made it interrupt its work for a total of 45 days. It was reported by the OSCE Special Monitoring Mission to Ukraine. The plant supplies with clean water 600,000 people on both sides of the contact line. A total of 72 towns has been cut off water supply for eight days already. This resulted from damage incurred by the power line feeding the plant. 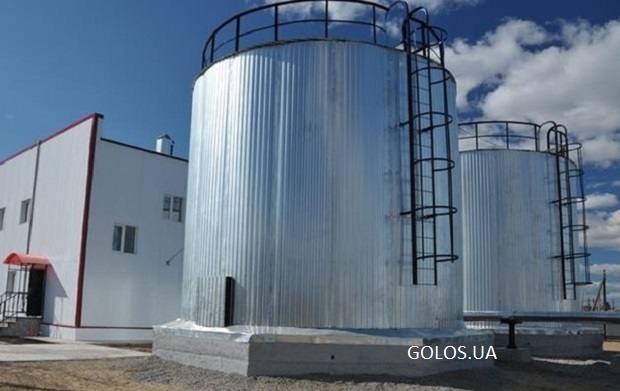 Alternative to the Anti-Terrorist Operation: martial law to be imposed in Donbas?

Ukraine needs a new format to protect itself from the hybrid war the Russian Federation is waging against it. The statement was made by Oleksandr Turchynov, Head of the National Security and Defense Council. According to him the format and the scale of the antiterrorist operation (ATO) has exhausted itself. 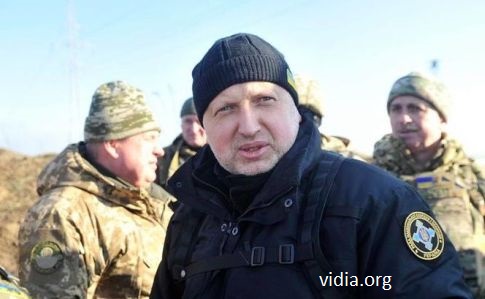 The new draft law suggests recognizing the uncontrolled areas of Donetsk and Luhansk regions occupied by the Russian Federation as well as clearly defines the state policy for their liberation (a series of military and diplomatic actions). In the upcoming weeks, the expert community will work out a respective draft law “On restoring Ukraine’s state sovereignty over the temporarily occupied areas of Donetsk and Luhansk regions” that is supposed to change the ATO format.

What the new law is about? Head of the National Security and Defense Council explained that the operational staff will be set up, it will have wide powers and will be able to coordinate the Ukrainian Armed Forces, all law enforcement agencies and regional military-and-civil administrations. The staff is supposed to secure the martial law in action in the above regions.

Current legislation foresees the use of the Armed Forces only when the war is declared or when an antiterrorist operation is being held. When martial law is introduced, a special legal regime comes into effect in the country (it imposes limits on voting rights, on the work of the parliament and of local councils, introduces the mechanisms to confiscate property etc.).

Is Ukraine to declare martial law? According to MP Oleksandr Bryhynets the draft law in question will introduce an intermediate stage between the ATO and martial law. “Armed conflict” is a term that is sometimes used in the international context. The difference between a war and an armed conflict is in the fact that the latter refers to a limited area. 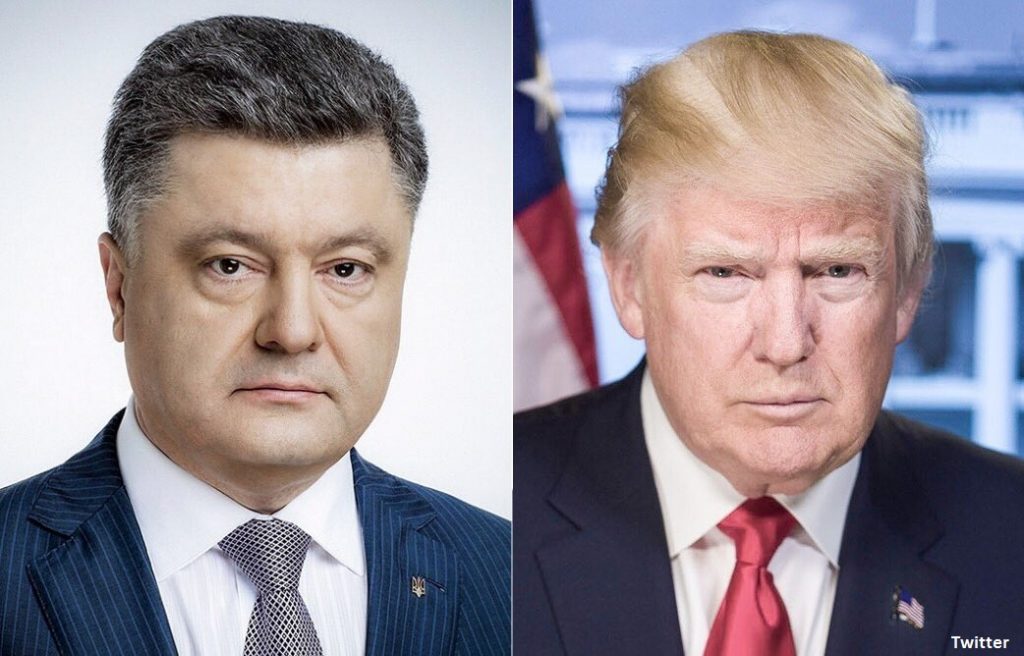 The Ukrainian President is to arrive in the US in the evening on June 19. The most important day during the visit isJune 20 when the head of the Ukrainian State will meet the US President Donald Trump, Vice President Mike Pence as well as the ministers of energy and economy. It is Poroshenko’s third visit to Washington as the president and his first meeting with the new US president. The war in Donbas will be part of the agenda.

Equality March in Kyiv: “Be rebellious, love, don’t give up your rights”

Who, when, where. March of Equality, an event that is part of the KyivPride forum took place on June 18 in downtown Kyiv. The event was called to get public attention to the rights of the LGBTQI persons in Ukraine as well as help overcome discrimination and violence against them. This year the march gathered a record number of participants – 2,5-3 thousand people, with both representatives of the LGBTQI community and people outside of it, who came to support them. Five thousand policemen and National Guard troops secured public order throughout the entire event.

Opponents of the March. About 100 representatives of nationalist groups got together aiming to stop the march. They blocked the street that was supposed to be part of the march’s route. Organizers changed the route to avoid clashes.

Support from the diplomatic community. The march was attended by representatives of Ukraine’s civil society, state agencies, expat community and foreign activists. State agencies included the Office of the parliamentary commissioner for human rights, the Ministry of Infrastructure, the Ministry of Economic Development and Trade as well as the Parliament (MPs). Ambassadors of the UK, Canada and Sweden came to express their support. They noted that the event was well-organized and participants’ safety secured, at the same time there was a number of open opponents to the event.

Ambiguous placards. There was a number of ambiguous situations on the part of the march participants. Majority of activists were carrying rainbow flags and chanting the mottos in support of the LGBTQI-community. However alongside the placards saying “All are diverse, all are equal”, “The country for all”, and “Be rebellious, love, don’t give up your rights” there were the ones that were negatively perceived by the society including “Make love not civil war” (a possible suggestion that it’s not the Russian-waged war in eastern Ukraine but an internal conflict), “Death to the nation, queer to the enemies” (allusion to the nationalist motto “Glory to the nation, death to the enemies”), “Fuck your patriotism”. Event’s organizers said that the placards do not represent the position of the LGBTQI-community but reflect personal views of their authors.

Positive trend. In 2013, the march was attended by about 20 participants, while the number of opponents amounted to over one thousand. It caused clashes and beating of the LGBTQI-activists. This year less than 100 opponents took to streets versus 2,5-3 thousand participants of the event.

Culture: exploring the history of the new Ukraine through fashion 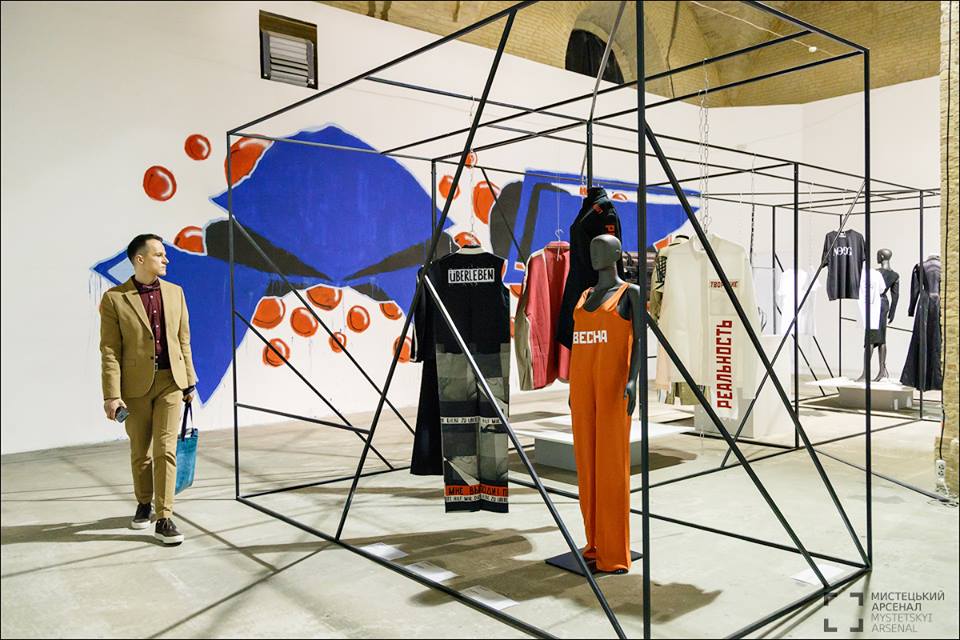 Exhibition on Ukrainian fashion “In progress. Dress-code of Ukraine through the times of independence” has opened in Kyiv. Its curator and fashion critic Zoia Zviniatskovska suggests exploring how the mentality of Ukraine’s nation has been changing through the last 26 years by taking a closer look at its outfits. Exposition is made of designer clothing, on-stage outfits of Ukrainian pop musicians, models that once were part of the fashion shows in Paris, Milan and New York as well as the dress that the first lady was wearing to the presidential inauguration. Ukrainian fashion is presented in the chronological order – starting from 1991 till nowadays. Exposition is split in sections: the one that refers to the period between 1991 and 1997 focuses on formation of new elites and the rise of avant-garde fashion, that between 1997 and 2010 on the search of the national self-identity and the rise of the Ukrainian glamour. The section that covers the time period between 2010 and nowadays narrates urbanism, emergence of mass-market brands and Maidan. The exhibition is on in Mystetslyi Arsenal until August 6.

Ukraine’s national diving team took the second place in the medal count at the 2017 European Diving Championships hosted in Kyiv. Ukrainians won three gold, four silver and three bronze medals. Until the last day of the sports contest Ukraine was leader in the medal count however it did not manage to preserve the top position. The Russian team won the third gold medal and thanks to the number of silver medals found itself being the leader.

Gold medals of the Ukrainian team were won by Illya Kvasha, by the diving duo Oleksandr Gorshkovoz and Maksym Dolhov as well as by Anna Pysmenska.

“Russia Day as a symbol of propaganda schizophrenia” – Livy Bereh