Luhansk sector remains the most restless in ATO zone. Immediately after midnight, a serious firefight between Ukrainian troops and illegal armed groups took place near Katerynivka. “The fighting continued for an hour. In addition to light weapons, the Ukrainian military used armored vehicles. Our servicemen incurred no losses. Later (before dawn, in the morning, afternoon and evening) the enemy continued attacks in Popasna district. Militants repeatedly used mortars and IFVs,” reported Col. Andriy Lysenko, Ukrainian Ministry of Defense spokesperson on ATO, at a press briefing at Ukraine Crisis Media Center. Besides, militants carried out two attacks in Novotoshkivske, one in Stanytsia Luhanska and one in Krymske. 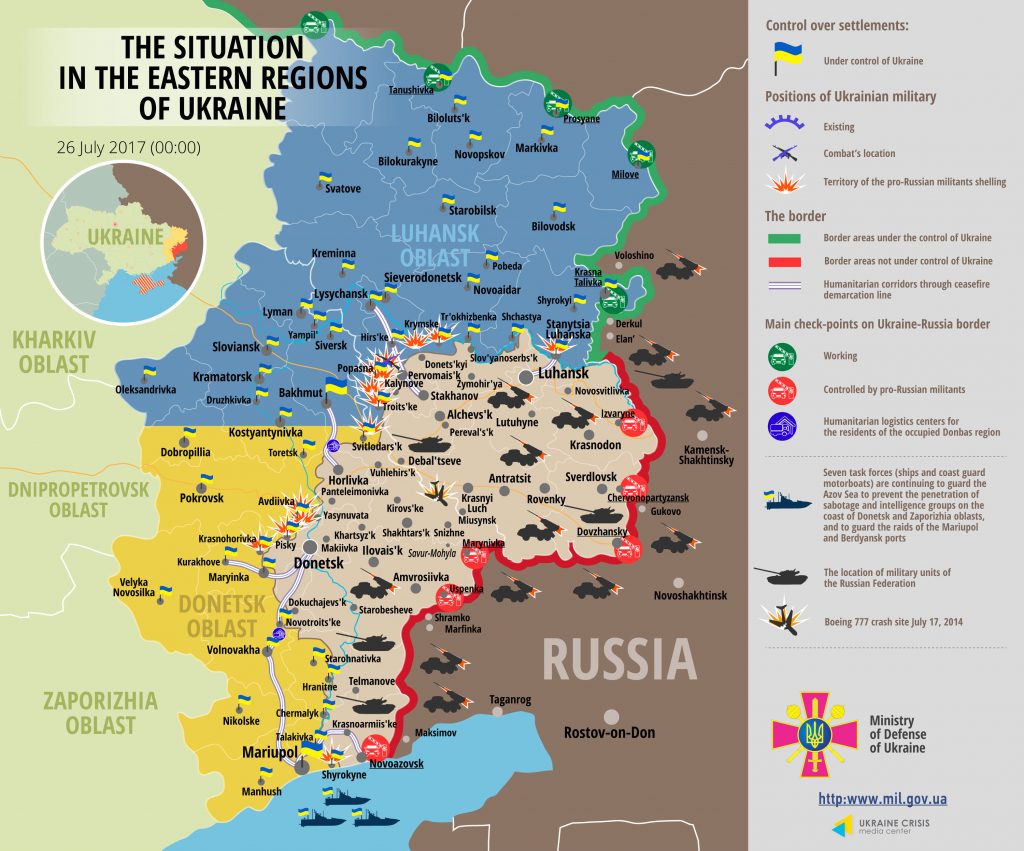 In Mariupol sector, militants carried out one shelling in Krasnohorivka before dawn and another one in the evening. In both cases, Russian proxies used heavy weapons: mortars and tank. “Moreover, the enemy violated the ceasefire in Shyrokyne: an enemy sniper was shooting there. It was calm in other parts of the sector yesterday,” said Colonel Lysenko.

In Donetsk sector, fighting began at around 18:00. Militants opened fire on Shakhta Butovka position, in Luhanske, Kamianka, and Pisky. “The latter shelling was the most intense. Russian proxies used mortars, firing about 20 rounds. Ukrainian troops returned fire,” noted the spokesperson.

As a result of hostilities, no Ukrainian serviceman was killed in action, but one soldier was wounded in an explosive device blast in Popasna district of Luhansk sector yesterday.

Report on the military developments as of July 25 is available here. Interactive data on the shelling: chronology shelling chart and the interactive map.