In Luhansk sector, armed hostilities continue at Bakhmut road. “At 7:40, militants opened grenade launcher and small arms fire against the positions of the defenders of Novotoshkivske. Five minutes later, Ukrainian troops noticed the advancement of militants’ sabotage-reconnaissance group consisting of up to 10 people. An urgent decision was made to fire for effect. Ukrainian soldier’s coordinated actions made the enemy retreat 15 minutes later, leaving a hand-held anti-tank grenade launcher, a machine gun and a radio station on the battlefield.

According to preliminary information, the enemy lost one person killed and one wounded. Unfortunately, two Ukrainian soldiers were wounded in the firefight,” reported Col. Andriy Lysenko, Ukrainian Ministry of Defense spokesperson on ATO, at a press briefing at Ukraine Crisis Media Center. 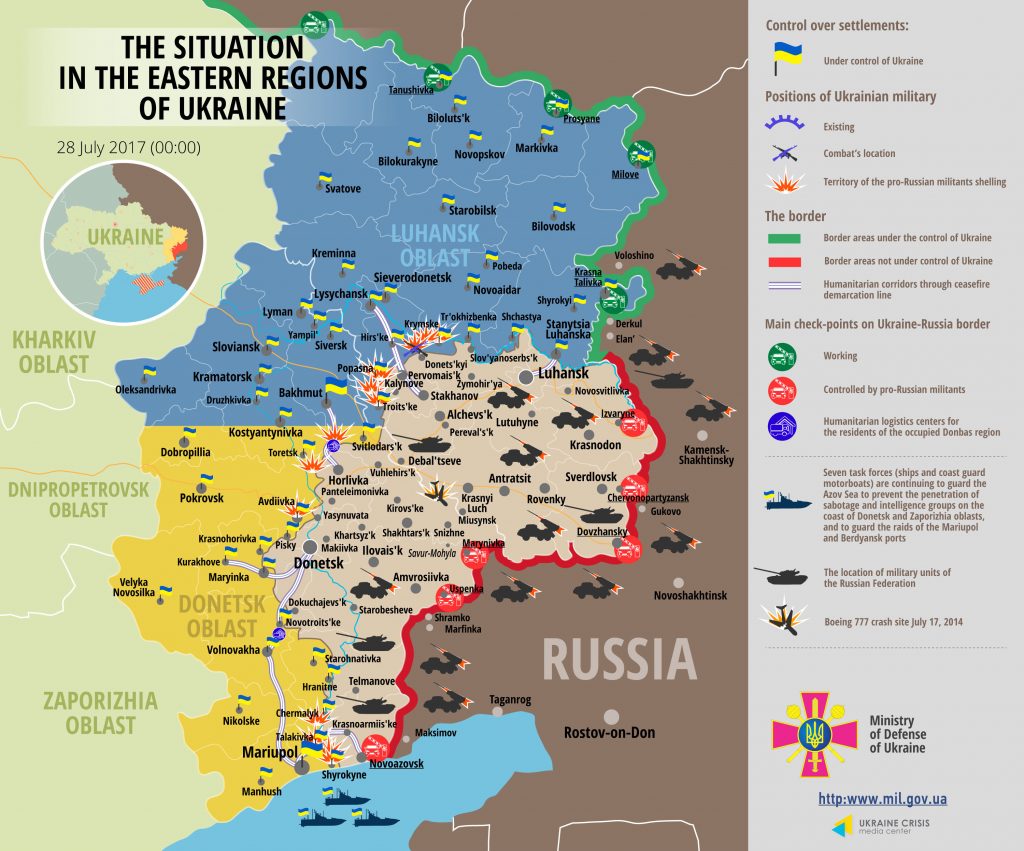 In the morning, Ukrainian servicemen recorded militants’ armed provocation in Novooleksandrivka of Popasna district. Russian proxies intensified their actions near Popasna in the evening launching a total of 6 mortar rounds at our positions after 21:00. In Novozvanivka militants opened fire from IFV weapons for 10 minutes in the evening. Overall, militants conducted ten ceasefire violations in Luhansk sector yesterday.

In Donetsk sector, militants violated the ceasefire four times. On Horlivka perimeter, militants attacked our positions in Zaitseve and Novhorodske. The shelling in Novhorodske continued for more than an hour. “In Avdiivka, fighting took place after 20:00, the enemy fired at our fortifications for more than an hour and a half. Along with grenade launchers and small arms, they used mortars, having launched 15 mines,” specified the spokesman.

In Mariupol sector, militants carried out eight attacks. They used grenade launchers and small arms in Vodiane and Shyrokyne. In the evening, militants attacked Pavlopil and Talakivka; the attacks lasted from 15 minutes to half an hour. “In Pavlopil and Vodiane the enemy fired four rounds in each case,” noted Colonel Lysenko.

One Ukrainian serviceman was killed and five were wounded in action yesterday. “According to the operational data, the enemy losses comprised seven persons killed and eight wounded. Of them, six persons were killed and three wounded as a result of an explosion of unidentified nature,” said Col. Lysenko.

Report on the military developments as of July 27 is available here. Interactive data on the shelling: chronology shelling chart and the interactive map.