In Luhansk sector, Novooleksandrivka was the main flashpoint yesterday. Militants were using both light and heavy weapons. Moreover, they made three attacks in Stanytsia Luhanska, Krymske and Novozvanivka.  “In total, seven hostile attacks took place in this sector, one of them involved mortars. Ukrainian troops returned fire in five cases,” informed Ukrainian Ministry of Defense spokesman on ATO Colonel Oleksandr Motuzyanyk at a press briefing at Ukraine Crisis Media Center. 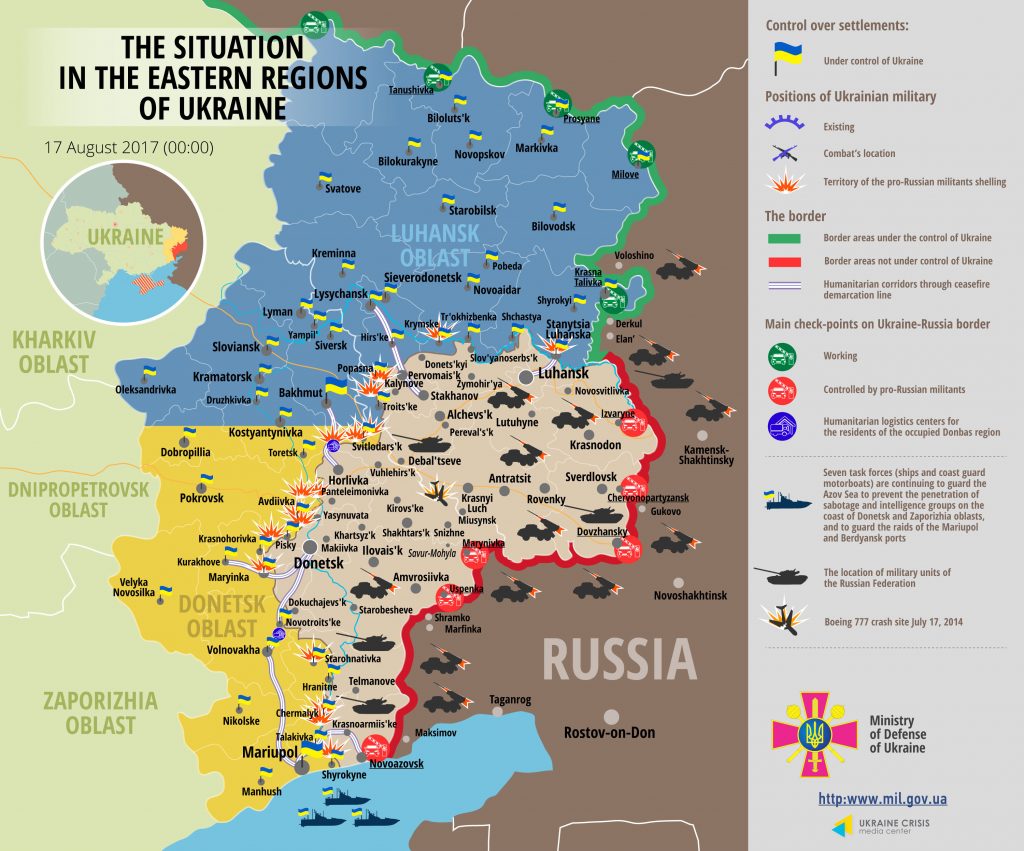 In Donetsk sector, hostilities continued along the entire frontline. Ukrainian troops recorded 21 hostile attacks in this area yesterday, and six of these involved mortars. “About half of the attacks took place in Avdiivka. The enemy was shooting from three directions simultaneously, actively using mortars and armor. An especially fierce fight started after 16:00 and continued till late night. They fired 30 mortar rounds at Ukrainian positions.  Our troops responded with fire to almost every aggressive move of the militants ” said the spokesman.  The situation was restless at the Svitlodarsk area and in the entire Horlivka perimeter – Shakhta Butovka position and Nevelske. Militants’ bullets and fragments hit Zaitseve’s residential area.

In Mariupol sector, Russian proxies were active in two areas at once. They actively used heavy weapons. Militants conducted a complex 50-minute attack in Starohnativka in the evening. They simultaneously used mortars, tanks, and 152-mm cannons, firing over 40 rounds. In Vodiane, militants attacked Ukrainian positions in the morning from two areas at the same time, using 122-mm cannons and Grad-P rocket launchers. Mortar attacks took place in Pavlopil and Chermalyk during the day. Another hostile attack was recorded in Maryinka. In total, militants conducted seven attacks in this sector yesterday, using heavy weapons in five of them.

One Ukrainian soldier was killed in action yesterday, and four troops were wounded.

Report on the military developments as of August 16 is available here. Interactive data on the shelling: chronology shelling chart and the interactive map.