The largest number of attacks in the ATO zone yesterday happened in Luhansk sector. Militants violated the ceasefire 11 times there, and used mortars in six cases. “The situation was rather restless in the vicinity of Bakhmut road and in Popasna district. Occupants actively used mortars, firing over 30 mortar shells. The enemy was more active in the afternoon,” informed Ukrainian Ministry of Defense spokesman on ATO- related issues Colonel Oleksandr Motuzyanyk at a press briefing at Ukraine Crisis Media Center. Moreover, militants conducted two attacks in Stanytsia Luhanska and Zhovte. 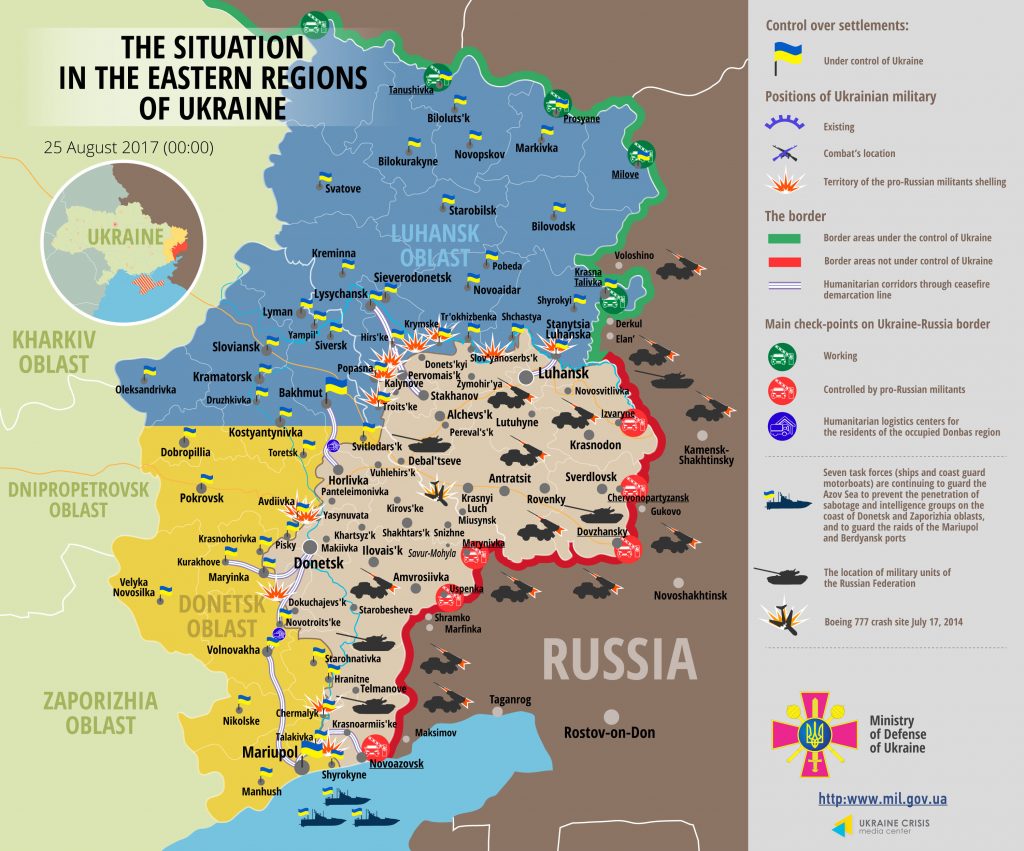 In Donetsk sector militants violated the ceasefire eight times, most of them near Avdiivka and Shakhta Butovka position. These attacks happened both during the day and at night, but no heavy weapons were used. Moreover, militants conducted two mortar attacks in Troitske and in Svitlodarsk area, firing over 25 mortar rounds.

In Mariupol sector militants fired 10 mortar rounds in the morning. Moreover, they violated the ceasefire in Taramchuk and Vodiane. Ukrainian troops responded with fire in one of the attacks.

No Ukrainian troops were killed in action yesterday, but three soldiers were wounded in Shakhta Butovka position as a result of militants’ attack. “Yesterday, on August 24, at 23:45, a Ukrainian serviceman was wounded during a chaotic hostile attack from small arms at Ukrainian positions near Talakivka in Mariupol sector. He was promptly given first aid and taken to a military hospital. Unfortunately, he died at 00:06, at the beginning of the next day. We express our condolences to the family and friends of the fallen soldier,” informed the spokesman.

Report on the military developments as of August 24 is available here. Interactive data on the shelling: chronology shelling chart and the interactive map.