No Ukrainian serviceman was killed in the ATO zone yesterday, and one soldier was wounded in a hostile attack in Nevelske, informed Ukrainian Ministry of Defense spokesman on ATO-related issues Colonel Andriy Lysenko at a press briefing at Ukraine Crisis Media Center.

In Luhansk sector militants violated the ceasefire once. They shelled Krymske with mortar, grenade launcher and small arms at night. Ukrainian troops responded with fire.

Krasnohorivka was a flashpoint in Mariupol sector yesterday. Militants briefly fired from various mortars there. All the other episodes of ceasefire violation took place in the southern area – Pavlopil, Hnutove, Talakivka and Vodiane. Militants used only light weapons there. Ukrainian troops responded with fire. 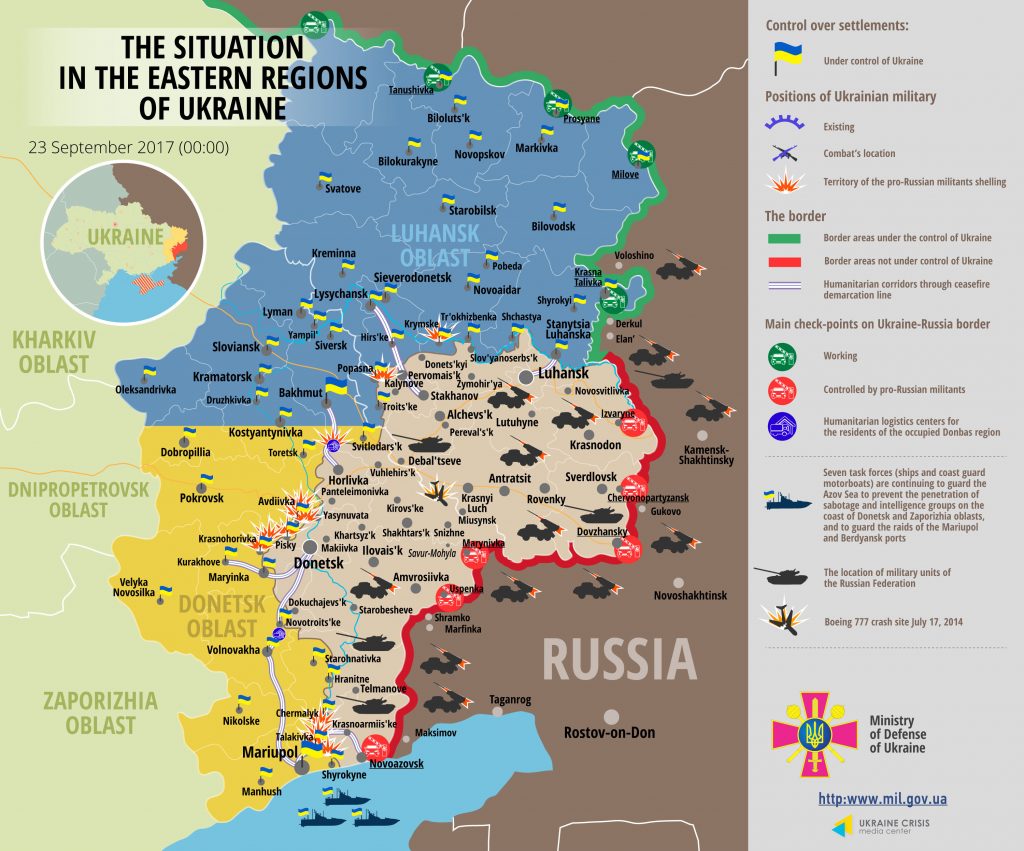 No casualties were sustained in a fire which happened about 16:00 at ammunition depot near Novoyanisol village. “The authorities evacuated civilian population living in the vicinity. Military engineers are working at the site now. According to the preliminary information, the fire resulted from burning harvested field at the adjacent farming enterprise; due to the strong wind the fire ignited the military object,” said Col. Lysenko.

According to Col. Lysenko, mass media of self-proclaimed “republics” report an assassination attempt of the so-called “DPR minister of revenues and taxes” Oleksandr Timofeev, nicknamed “Tashkent”, in Donetsk this morning. “His vehicle exploded. Timofeev sustained severe injuries and was taken to hospital. In spring 2014 Timofeev joined the chiefs of “DPR” terrorist organization. In particular, he participated in fights for Donetsk airport in the ranks of militant group “Oplot”, said the spokesman.

Report on the military developments as of September 22 is available here. Interactive data on the shelling: chronology shelling chart and the interactive map.