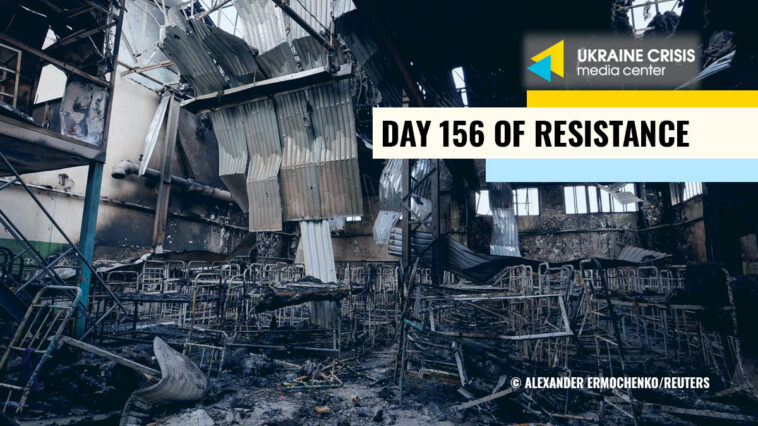 On July 29, an attack on a site, where Ukrainian war prisoners from the Azov regiment were held in Olenivka, Donetsk region, killed 53 and wounded 75, Russian sources said.

A prison barrack to which Azov service members were moved a few days earlier was targeted in the attack, editor-in-chief of Ukrainska Pravda Sevhil Musayeva said in a Facebook post.

Ukraine’s Security Service intercepted a phone call between Russia-backed militants blaming the massacre on the Russian forces. Russia-backed “DNR” militants appear to distrust Russia’s propaganda that blames Ukraine for the attack on the prison in Olenivka.

Ukraine’s Security Service has several more intercepted calls, and will add them as evidence in a criminal case opened under Article 438 of the Criminal Code, which criminalizes violations of the laws or customs of war.

The Russian forces possibly planted explosives in the prison, the militants said in an intercepted audio. Witnesses did not hear the incoming missiles on the prison. While there was no whistling sound, explosions went off.

The intercepted calls also say that the Russians stationed their Grad missile systems near the prison site and began to fire from them toward Ukraine-controlled territory. No return fire followed, the “DNR” militants said.

On July 28, a video emerged on social media showing Russian soldiers cut off the Ukrainian war prisoner’s genitals. Some western media described what was on the video without publishing it. “The footage, which MailOnline is not publishing, shows a group of men wearing Russian camouflage pinning a soldier in Ukrainian fatigues down and using a box-cutting knife to remove his genitals and then hold them up to the camera”, The Daily Mail said.

Ukrainian MP Inna Sovsun tweeted the footage, saying: “Russia has to pay for it”. Her Tweeter account was later blocked for posting violent content.

It is unclear what happened to the Ukrainian soldier in the video, but it is unlikely he survived his injuries without immediate medical attention, The Daily Mail said.

Later, a second part of the video emerged on Russian Telegram channels showing the Ukrainian war prisoner being shot in the head, his body thrown into a pit.

Aric Toler, from Bellingcat, has told The Times that the video is likely genuine. There is no evidence that the video has been manipulated, he said, pointing to Russian state media that showed some of the same Russian soldiers in the city of Severodonetsk back in June.

Italy VS Russian propaganda. Who wins? Ukraine in Flames #141

Russian disinformation is a vital component of the war against Ukraine. However, it is a far more long lasting issue that manifests in different countries and targets different societies. Italy is one of them. Having created a network of agents, the Kremlin also depends on the number of problems in the Italian media and its natural anti-Western allies among the local politicians. What are these problems? What channels of communication are used for the spread of Russian propaganda – and what can we do about it? Watch Ukraine In Flames #141 to find out.