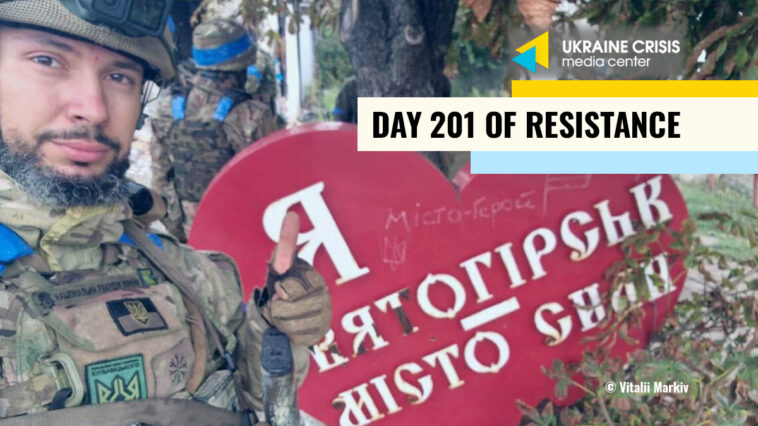 Ukraine’s defense forces entered the town of Svyatohirsk, in Donetsk region, and are cleansing the area, Ukrainska Pravda said, quoting an unnamed military source. The troops deployed to the area are units of the Armed Forces of Ukraine and the Serhiy Kulchytskyi operational battalion of the National Guard of Ukraine.

The General Staff of the Ukrainian Armed Forces issued no official statements. A photo of a Ukrainian flag flown above the front door of the town hall was posted to social media. The National Guard serviceman Vitaliy Markiv posted to social media a photo of himself in the town, saying: “We are in Svyatohirsk”. Svyatohirsk, in Donetsk region was occupied by the Russian forces, while the Svyatohirsk Lavra monastery located across the Siverskyi Donets River was controlled by the Ukrainian troops.

On the afternoon of Monday, September 12, Russia conducted another missile strike against Kharkiv. The attack damaged critical infrastructure, the mayor of Kharkiv Ihor Terekhov said.

“The passengers who were inside the subway cars are being taken to nearest stations,” spokesperson of the Kharkiv subway Oleksiy Bitner said. The subway staff are instructed on how to act in an emergency like that, he reassured.

On the evening of September 11, Russia conducted a missile strike against a thermal power plant in Kharkiv, one of the biggest in Ukraine. Two people were killed, both were workers of Ukrenergo, the Ukrainian electricity transmission system operator.

The Russian strikes caused blackouts in a number of regions. There were partial power outages in Kharkiv, Donetsk, Sumy, Poltava, and Dnipropetrovska regions. A few hours later, power supply was fully restored in almost all regions.

On the night of September 11 into September 12, a Russian missile strike hit residential buildings in Novobavarskyi district of Kharkiv. A five-story building was damaged. One person was killed, and two more were injured.

More than 1,000 civilians killed, 80 per cent of infrastructure destroyed under Russian occupation in Izyum

At least 1,000 civilians were killed under the Russian occupation in Izyum, Kharkiv region. Eighty per cent of the city’s infrastructure is destroyed, member of the Izyum city council Maksym Strelnikov said in a news conference at Media Center Ukraine.

“On September 10, the Armed Forces of Ukraine flew a yellow-and-blue Ukrainian flag over Izyum. It now flies above all buildings, the city council, and on the highest spot in Kharkiv region – the Kremyanets mountain,” Strelnikov said.

“The Ukrainian Armed Forces, Security Service, and other law enforcement agencies are conducting measures to stabilize the situation in Izyum, so that the General Staff and the government can make an official statement, and give us the good news that we were waiting for so long,” he added.

Izyum was severely damaged in a war, Strelnikov said.

“More than 80 per cent of the city’s infrastructure was destroyed. These are private houses, apartment buildings, commercial spaces, local government and municipal buildings, and industrial facilities. The city is destroyed. There’s winter ahead, and the central heating system is broken,” the member of the city council said, quoting the mayor of Izyum Valeriy Marchenko.

We are witnessing a remarkable counter-offensive of the Ukrainian army in the Eastern part of the country. Ukrainians liberated more territories in 4 days than Russians took in 4 previous months. Let’s try to understand the Ukrainian successes. This is the weekly digest of our Explaining Ukraine podcast. Hosts: Volodymyr Yermolenko, Ukrainian philosopher and journalist, chief editor of UkraineWorld.org, and Tetyana Ogarkova, Ukrainian scholar and journalist, in charge of international outreach at the Ukraine Crisis Media Centre.

From occupation to annexation: How to stop Russia’s pseudoreferendum? Ukraine in Flames #184

Thousands of international volunteers have braveheartedly sacrificed the safety of their homes and hurried to Ukraine to help its people survive Russia’s bloody war. Watch two volunteers, Johanna from Sweden and Tony from the UK, tell their personal stories and share the most inspiring moments of their experience in Ukraine In Flames #185.